While the prosecutor was reprimanded by the court for failing to move this case forward, it does not provide Assange with a remedy, says Michael Ratner, US lawyer for Julian Assange

While the prosecutor was reprimanded by the court for failing to move this case forward, it does not provide Assange with a remedy, says Michael Ratner, US lawyer for Julian Assange 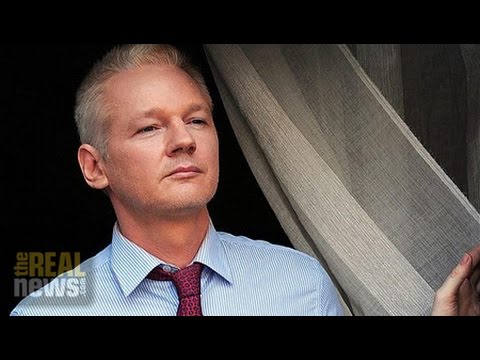 The Swedish Court of Appeals upheld the continued detention of Julian Assange on Thursday. Assange has been held for four years without being charged with a crime, and he is an asylum at the Ecuadorian Embassy.

Now to talk about all of this is, of course, Michael Ratner. Michael Ratner is coming to us from New York City. He is the U.S. lawyer for Julian Assange and president emeritus for the Center for Constitutional Rights.

Thank you as always for joining us, Michael.

MICHAEL RATNER, PRESIDENT EMERITUS, CENTER FOR CONSTITUTIONAL RIGHTS: Sharmini and The Real News, it’s always good to be with you.

PERIES: So tell us what’s going on today with Julian Assange.

RATNER: Well, today Is November 20 as I’m speaking to you, Sharmini. And today we had some relatively bad news from Sweden, although I think ultimately we’re going to see some victory because there were us some criticisms of the Swedish process today.

What happened today is the court of appeals in Sweden, which is near to the highest court–it’s the appeals court–decided against a petition or a legal brief that was brought by Julian Assange is Swedish lawyers.

And you have to set up the following situation. He’s been in some form of custody for four years, which is to say, the Swedish government–or the Swedish prosecutor, rather–issued an arrest warrant on her own for Julian Assange’s arrest over four years ago. He was given bail for a while. He wore a bracelet for a while. But he was always in the U.K. and in custody. The case ran through the English courts.

And then, after two years, of the bracelet sort of wearing, he was told to report to Sweden. He didn’t–he decided–really, on the advice of lawyers–not to report to Sweden, because he assumed, as his lawyers told him, that would be essentially essentially a one-way ticket to the United States, where he would face persecution for his activities as a publisher of WikiLeaks publishing material allegedly from Bradley Manning, Jeremy Hammond, and many others. So he took refuge in the Ecuador Embassy, where he was given asylum. He’s been–by the Ecuador government because of the fear of persecution in the United States and the belief that if he was sent to Sweden, it would be a one-way ticket to the United States.

People have to understand he has never been charged with a crime. These are allegations of sexual misconduct in Sweden. In four years, never a criminal charge. The prosecutor claims she wants to question Julian Assange. He’s open for the questioning. But she hasn’t been willing to do it.

So what happened in that circumstance is Julian Assange–the lawyers in Sweden said, well, there’s an obligation on the prosecutor to go forward with the case. The prosecutor can’t just sit on their hands and do nothing. He’s sitting in an Embassy, really, there with asylum. He’s essentially in custody not of the Ecuadorians, but in custody of a Swedish warrant for his arrest that has forced him to essentially be in custody, choosing between either going to Sweden and the United States or giving up his right to asylum.

They brought a case in Sweden saying, you can’t just sit on your hands and do nothing. This has been four years of custody, over two years in the embassy. And as I said, he fears going into Sweden because of the one-way ticket. They’ve been unwilling to give him a guarantee he won’t be sent to the United States. You have to do something; you can’t do anything. But despite this, there’s been no movement by the Swedish prosecutor for these two years. As I said, never charged with a crime, never questioned, etc.

And then, a couple of weeks ago, while this case was pending in Sweden, the U.K. secretary of state for the Commonwealth office, Hugo Swire, said the government of U.K. would, quote, “actively welcome” the prosecutor coming to London to question Julian Assange. Despite that, no movement from that prosecutor.

So this case gets presented to the lowest court in Sweden, then goes to the middle court. The middle court decision came down today, and as I said, it was disappointing. But we do expect to prevail.

The Swedish court, however, was very critical of the prosecutor’s actions in failing to move the case forward by questioning Julian Assange. And that is certainly the most important part of the case. The court said–the court reprimanded the prosecutor. And here’s what it said. The investigation into the suspected crimes has come to a halt.” Quote, “the failure of the prosecutors to examine alternative avenues is not in line with their obligation–in the interests of everyone concerned–to move the preliminary investigation forward.”

So they basically said the prosecutor is not living up to their obligations to move this case forward. You would think that the next thing would be to say, prosecutor, you either dismiss this warrant of arrest or you question him. But, unfortunately, the Swedish court at this level did not do that; despite this clear violation of the law by the prosecutor, the court refused to act and declined to rescind the arrest warrant, which is the relief the Swedish prosecutors were asking. In other words, looked at this way, Julian’s rights were violated by the failure of the prosecutor to press the case, but the court refused to give Julian Assange a remedy for that violation.

RATNER: You know, Sweden is not exactly, despite its reputation, the most liberal country in the world, and here you’ve had a case pending for four years. The prosecutors failed to question Julian Assange. There’s only allegations. So they’re put in this situation: either they question him and most likely the case just goes away because they don’t necessarily have a case after they hear his side of the story, or they just are ordered to drop the case. And it’s obviously a big black eye in Sweden, because here they’ve made this hullabaloo, they’ve gone through the court system in the U.K., they’ve asked for his extradition, the U.K. upheld it–although I should say as an aside, the U.K. upheld the extradition under the old U.K. extradition law, because in fact the Julian Assange case and some other similar cases–they have now changed the law in the U.K., so that Julian Assange would not be extradited under the law today. But they didn’t make it retroactive in the U.K.

It’s unclear what’s going on unless there’s something really nefarious going on, which is conceivable, that Sweden is up to no good, wanting to keep Julian in a situation in which the world looks at him, no, he’s not going to Sweden, etc., without actually taking any action.

In any case, it’s a clear violation of his rights to due process. How can they keep a case open for two years–or four years, really, two years in the embassy, and not question him?

Interestingly, the United States has revealed just in May of this year that the Department of Justice is engaged in what–and I quote this–a multi-subject investigation into WikiLeaks. And the Department of Justice went on to say that investigation is active and ongoing. And it’s been going on for four years. And just remember, it’s the investigation of a publisher that published material that the United States not only didn’t like, but in which politicians called him a high-tech terrorist and pundits essentially called for his assassination.

In June of this year, over 53 press and human rights organizations, including Human Rights Watch, Reporters Without Borders, called on the Department of Justice to drop any investigation into WikiLeaks and Julian Assange. Despite this, the investigation continues.

I guess the final question is: what’s next? What’s next is Julian Assange will remain at the Ecuadorian Embassy in London under difficult conditions–through no fault of Ecuador those conditions are difficult. He’s lived in a confined space in the embassy. It’s small. No adequate access to health care, normal contact with family members, or the ability to go outdoors, since June 2012.

To date, the United Kingdom has spent GBP 8 million–over $12 million–on surrounding the Ecuadorian Embassy. And so he remains there, despite the utter failure, from a constitutional or really an international law point of view, Swedish law point of view, for the prosecutor to carry on with the case.

Assange and his lawyers in Sweden plan to take the case to the Supreme Court of Sweden, where I think were very hopeful, if not more or less confident, that there’s a strong legal basis for the appeal, because that’s such an outrage. It makes no sense. And hopefully the Swedish Supreme Court will force the Swedish prosecutor to follow the law in Sweden.

My next report for The Real News, I hope we’ll have better news on the Julian Assange front.

PERIES: Michael, as always, thank you so much for the update. And I welcome you back soon.