Next step: Palestine submits thousands of pages documenting Israeli war crimes to the International Criminal Court; if the prosecutor fails to act, legitimacy of the court will further erode, says CCR's Michael Ratner

Next step: Palestine submits thousands of pages documenting Israeli war crimes to the International Criminal Court; if the prosecutor fails to act, legitimacy of the court will further erode, says CCR's Michael Ratner 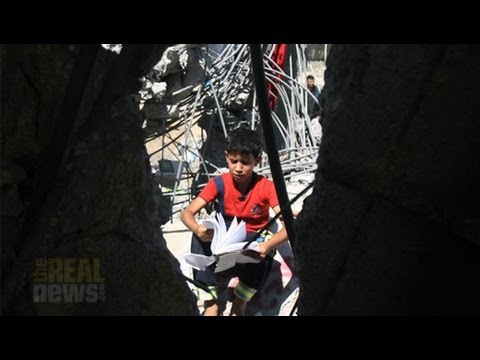 JESSICA DESVARIEUX, PRODUCER, TRNN: Welcome to The Real News Network. I’m Jessica Desvarieux in Baltimore. And welcome to this edition of the Ratner Report.

Now joining us is the man behind the Report, Michael Ratner. He is the President Emeritus for the Center for Constitutional Rights, and he’s also a board member for The Real News, and of course he’s a regular contributor. Thanks for joining us, Michael.

MICHAEL RATNER, PRESIDENT EMERITUS, CENTER FOR CONSTITUTIONAL RIGHTS: Good to be with The Real News and with you, Jessica.

DESVARIEUX: So Michael, we have this UN report that came out about the war between Gaza and Israel back in the summer of 2014. I know you’ve been tracking it quite closely. What are some highlights? What have you picked up from this report?

RATNER: Well you know, what I’m left with and what I’m at today really is how much longer is the world, and particularly the United States, going to facilitate and enable Israel in these periodic bloodlettings that they engage in in Gaza. And this report hopefully, like some of the other ones, is beginning to close that window on Israel, and hopefully Israeli officials won’t have impunity forever for the murders and killings and devastation in Gaza.

But let’s talk about this report. Last week the commission to investigate the violations of the laws of war and human rights violations in the Gaza Strip in 2014 during the war reported back to the UN Human Rights Commission, which can then decide what to do with the report and ultimately go to the Security Council. But what that commission was appointed to do was investigate an operation of the Israelis called Protective Edge.

Now to put that into context, it’s the third such military operation by Israel in the last seven years. Major military assault on Gaza, which is essentially an open-air prison, surrounded by Israel, air space controlled by Israel, and occupied territory even though there’s no actual Israeli troops on the ground most of the time. This is the third such operation. Operation Cast Lead, which we thought would be the end of this kind of thing because it was so horrible, was in 2008 and 2009, and Operation Pillar of Defense was in 2012.

Israel military strategists call these periodic “operations” mowing the lawn, as if killing thousands of Palestinians is essentially like cutting the grass. Cast Lead–and I’ve given reports on Real News on that, which was 2008-2009, resulted in 1,300 Palestinians killed. The majority were civilians, 5,000 wounded. Compare that to what happened to Israel. Thirteen Israelis killed, only three of which were civilians.

It resulted in an earlier report analogous to this one. That one became famous. It was called the Goldstone report. Former justice Goldstone wrote that report, and it condemned what was going on particularly in the occupied territories, essentially called it apartheid, and documented the slaughter that Israel had engaged in during that 2008-2009 Cast Lead assault on Gaza. However, because of pressure from the United States, particularly, Judge Goldstone started to retract on some of his findings. Of course, it didn’t really mean much, the report was out. The other commissioners didn’t retract. It was sort of–it’s hard to say, but to some extent it just seems like he bowed to the pressure to perhaps not be an outcast in his own community. In any case, that was a report that condemned what Israel had done.

Many people did not think it could happen again, but of course it did. It did last summer. It began on June 13, the Israeli assault on Gaza called Protective Edge, and this time the numbers were even worse. 2,131 killed, perhaps more, of which 1,473 were civilians, and 500 children. The UN commission report which came out last week gave a figure roughly analogous, 65 percent civilians were killed. That’s an astounding figure in a war. There are–of course, civilians are often killed in war. When it’s like that it makes you question, was Israel intentionally targeting civilians?

The answer to that, always disputed. In the Goldstone report initially it was said they were. Goldstone retracted, but the report still stands. In this report without saying that explicitly, you can draw the conclusion that on a number of occasions civilians were intentionally targeted. Compare that 2,100 figure to the Israeli figure. 71 Israelis were killed, 55 soldiers, and 5 civilians. So less than 10 percent civilians, compared to 65 percent or over. And as the report said, and it’s devastating, really, in Gaza–I’m quoting from it–in Gaza, the scale of devastation was unprecedented. Unprecedented. The killed, the injured, and the infrastructure destroyed. 18,000 houses, 80,000 damaged.

So it’s a very strong report documenting what Israel did, and saying Israel had to be held accountable for it. And it also talked about, and this is important, like the Goldstone report it put this attack and really the response of the Palestinians into the context of the occupation, which has been going on since 1967, the settlements which have been continuing even as we speak, the house destructions going on in the occupied territories, the prisons and the treatment of prisoners with cruel, inhuman, and degrading treatment during this period. And it talked about war crimes based on proportionality. You can’t kill more civilians than are necessary to achieve your military goal, and you have to distinguish between civilians and military. So it talks a lot about that. It’s a good report.

A critique of the report that I have is that it–not that it talks about Palestinian armed groups and what they did. Yes, they sent rockets into Israel. And there were tunnels, although it’s not clear that those tunnels were used for any purpose other than for people to go through, soldiers to go through and attack Israeli targets, and not on a great level. But it talks about what Palestine did. Unfortunately to me it begins the report with what the Palestinian armed groups, as it refers to them, are called. And the problem of the report is it looks at them as if there’s some symmetry between what Israel did and what the Palestinians did. Of course, there’s not.

Clearly, as I pointed out, there’s not that in terms of numbers and destruction. Very little was destroyed in Israel. The numbers were, any killed person is serious, but how do you compare a number in the 70s to a number over 2,000. So nothing close. So you can’t make a symmetry out of what occurred, the way the war was fought, et cetera.

But you also can’t have symmetry in terms of context. In one case Israel is the occupier. Israel is the oppressor. And the other is the oppressed and the occupied. You get rid of the occupation and you won’t have the need to resist it. The problem with the report making any kind of symmetry between those two is it plays into the Israeli and to a certain extent the U.S. narrative, that somehow Israel with the support of the U.S. has the right to defend itself. In fact, of course, it’s the occupied people that have the right to resist occupation. Israel, what it should be doing, is ending the occupation.

What Israel needs to be doing is ending the occupation. If in fact Israel obeyed international law, followed UN resolutions, the occupation would long be over and there wouldn’t be need–and there never has been a need, but Israel wouldn’t feel it has any need, and of course I don’t think it does, to do what it has done in Gaza.

Despite this drawback, it’s still an important report. It’s another document by neutral observers of Israeli war crimes. There’s been three, there’s been responses to it. The U.S. gave one of the more sickening press conferences I’ve ever looked at. The U.S. essentially is an ostrich, or ostrich-like. They said there’s no more need for the UN to do anything here, there’s a bias against Israel, et cetera, ignoring the war crimes documented in the report.

And let’s just remember this. The U.S., with its over $3 billion a year, is an enabler of Israeli war crimes. It continues to support Israel with military weapons, despite knowing it’s committing serious, serious human rights violations. When Israel, Israeli officials, are finally put into the dock, U.S. officials I hope will be going along with them.

Israel’s response was simply to not cooperate again with the UN commission. They simply don’t respond. Not to any letters, they wouldn’t cooperate, are claiming that there’s bias against Israel. And then in their actual response they said Israel acted morally. It has moral behavior, and it’s terror that it’s confronted. And it’s been moral in that. Well, that’s a complete reversal. The terror here is being committed by Israel, not by the Palestinians. And then they claimed Israel is a democracy. Well, apart from lots of disputes on that and what happens within Israel, and the fact that there’s millions of Palestinians who can’t vote in any election that Israel has, how does a democracy justify the slaughter that has taken place in Gaza.

And it did it in three areas. First in what we’ve been talking about, the report on the way this war was fought, Protective Edge. And it talked about the war crimes that were committed, the thousands of civilians killed and destruction of tens of thousands of houses. And that report was, that’s aspect one of what it submitted to the ICC. Aspect two was the torture and cruel, inhuman and degrading treatment of prisoners, detainees in Israeli jails, many without charges. And thirdly, and this is important and I’m going to end on this point, that they also submitted to the International Criminal Court the question of the settlements. And the settlements, which are of course in occupied territory, are absolutely, 100 percent, slam dunk illegal. They’re a war crime. There’s no real defense for them. You’re not allowed to put settlers of your own country into occupied territories.

And the question remaining now is, will the prosecutor in the International Criminal Court open a full-scale investigation? If she doesn’t, in my view it will end any legitimacy that court has left. So let’s hope she does. Unfortunately time is running as she considers it, and it can take a long time at the International Criminal Court. During that period operations like the assault on Gaza could happen again. Perhaps if the prosecutor acts rapidly it will dissuade the Israelis from entering into another Gaza war. Let’s just hope so.

So there’s movement. It’s much slower, I think, than the Palestinians need or deserve, but hopefully it will make a difference.

DESVARIEUX: All right. Michael Ratner, joining us from New York. Thank you so much for being with us.