Michael Ratner says even though the case filed on behalf of families of victims of US drone strikes was dismissed, it raises important issues about the German role in the US drone program

Michael Ratner says even though the case filed on behalf of families of victims of US drone strikes was dismissed, it raises important issues about the German role in the US drone program 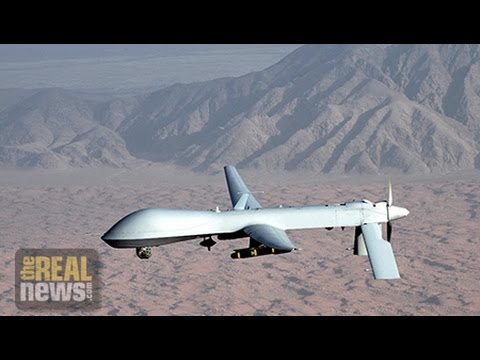 JAISAL NOOR, PRODUCER, TRNN: Welcome to The Real News Network. I’m Jaisal Noor in Baltimore. And welcome to this latest edition of the Ratner Report. We’re now joined by Michael Ratner. He’s the President Emeritus of the Center for Constitutional Rights in New York, and chair of the European Center for Constitutional and Human Rights in Berlin. He’s currently a legal advisor to WikiLeaks and Julian Assange.

Thanks so much for joining us, Michael.

MICHAEL RATNER, PRESIDENT EMERITUS, CENTER FOR CONSTITUTIONAL RIGHTS: Jaisal, it’s good to be with you and The Real News.

NOOR: So what do you have for us this week?

RATNER: Well as you mentioned, Jaisal, I am involved with the European Center for Constitutional and Human Rights, and this week they lost an important case concerning drones. What I call drones are basically death sentences without trial, or murder by drone. But the ECCHR, the European Center, along with Reprieve–Reprieve is an English civil liberties organization–brought an important challenge to the use of drones this last week that was lost. But at least it had some pluses.

The case was brought in Germany. You might ask, why Germany. Well, over the last couple of years there’s been many revelations that the U.S. military base at Ramstein in Germany, the biggest U.S. military base outside the United States, played a role in the drone operations in Yemen, in countries in Africa, and in Afghanistan as well as perhaps Pakistan.

This revelation caused great debate In Germany. People said, what are we doing being a place involved with what the United States is doing with drones all over the world? And then a few weeks ago Jeremy Scahill at the Intercept surfaced a document that essentially confirmed Germany’s role in the drone operations. That document demonstrated conclusively what that role is, and had a slide of how it works.

Here’s what we know. Drones are instructed to surveil and murder people from U.S. bases in the southwest. Nevada and other places. But the signals to those drones which are flying, for example over Yemen, are sent from United States through Germany and through the Ramstein air base. They don’t go directly from Nevada to the drone flying over Yemen. That has to do with timing, logistical reasons, and other. They go through the satellite relay station in Ramstein in Germany. That’s much closer to the action. The timing is much more, supposedly, accurate, et cetera. And then the videos that are of the operations where the surveillance or kill operations are sent back through Ramstein to the U.S. bases in Nevada.

The U.S. admitted that without the Ramstein program one way or another, or without a program of transfer of the satellite, it would seriously impair the drone program. So it’s essential to the operation of the program. Within Germany these revelations caused a real stink.

Many scholars and officials believe it is illegal to use drones in the circumstances they are used in, which is outside a war zone. There’s no war in Yemen, for example. So what gives the United States the right to kill people in Yemen? When used in a place like Yemen outside a war zone, it’s considered from an international law point of view extrajudicial killing. In other words, death penalty without trial. This is not to say, and I would never say it, that there aren’t problems of use of drones in war zones. There’s huge civilian casualties, there’s something called signature strikes that are based on the behavior of a person and not who’s there, et cetera. But we’re talking about here are outside war zones, and it’s considered a violation of international law as well as treaties. And in Germany it’s a violation of their own laws, the obligation of the German state to protect lives.

So in this circumstance ECCHR, the European Center, and the English charity Reprieve went to court on behalf of Yemenis whose relatives were murdered by drones. And amazingly, of course amazingly for us who practice law in the United States, the court in Germany was willing to hear the case. The claim was that Yemen was not a war zone, and that therefore you can’t use drones to kill people outside a war zone. And Germany had an obligation under its law to protect lives and not allow its territory to be used to kill people.

As I said, the case lost. The court heard it, they acknowledged, which is an important acknowledgment, that Germany did have an obligation to protect lives. But they said as a matter of German law and what the German government was authorized to do, it had the discretion on the basis of foreign policy to take the measures it took. It was not up to the court to essentially second-guess the measures that Germany took in its foreign policy.

It’s odd. It’s an odd ruling, but I’ll get to why it’s not so odd for us in the United States. Because if Germany is violating the law by allowing its bases to be used for drones outside war zones, the court should say that. It’s an abdication of the court’s role to say, well, if it’s violating the law they can do whatever they want in the name of foreign policy. The court has, in my view, an obligation to say what the law is and what’s allowed under the law, and not to simply go to foreign–not to simply go and say, this is foreign policy. But that is what it did.

It’s a bit of a gain, though, because of the obligation that the court said there was to protect lives on the German state. And also the court recognized something the U.S. has not really publicly admitted, that Ramstein is what it is, which is a military base with an important role in the drone war. The U.S. has still not been wiling to recognize that. And the court also said that the Yemeni plaintiffs could appeal to an upper court. So I don’t consider that case dead yet. It does seem that foreign policy as an excuse for murdering people shouldn’t be sufficient. Think about how far an argument like that could go.

Unfortunately, the decision in Germany parallels to a case that the Center for Constitutional Rights, my organization, brought along with the American Civil Liberties Union. The ACLU. And I’ve done some segments on The Real News about it. That’s the Al-Awlaki case. Al-Awlaki, if our viewers recall, was a Muslim preacher in Yemen making very, very strong statements about the United States, et cetera. And recall also that Al-Awlaki was put on a death list, living in Yemen, put on a U.S. death list for drones. And we, the ACLU and the CCR, tried to stop it. We went to court a couple of years ago. The court, amazingly, gave a similar excuse to what we just heard from the German court, that the court would not examine national security policy of the United States. Again, it makes no sense to allow the government to commit murder and crimes in the name of foreign policy or national security. Completely outside what the role of the courts should be.

And so as we speak, the U.S. and Obama continues to murder people by drones. It doesn’t mean we shouldn’t continue to bring these cases. They have to be brought. There was a bit of a gain. But in any case, it’s an illegal operation. We have to increase the public debate about it. And all of these litigations is bringing to public attention these outrages, ultimately I hope lead to a political decision forced on out governments by people to end these murders by drone.

NOOR: And Michael, will there be an appeal of this European court decision?

RATNER: Yes. They gave the right to appeal, and I’m sure that the European Center will appeal this case. I mean, they did okay with the case in the sense they got it admitted. The court said that there’s an obligation of Germany to protect, et cetera. And I don’t think that the German court will, except perhaps the German appeals court will accept [as] the American courts have, that you can simply use the word national security or the words foreign policy, and somehow use that as a cover for major human rights atrocities and illegalities.

I mean, if that’s the case where does it stop? Does it stop with concentration camps, does it stop with killing 25,000 or more people, murdering them in Vietnam as part of a CIA operation? It never stops if you use the cover of national security to cover up human rights.

So the case is very important. Hopefully the German courts will do better than we have done in the U.S. courts.

NOOR: Well Michael, we’ll certainly have you on again to give us an update on the appeal to this decision. Thank you so much for joining us.