The Wailing of Western Sahara

Michael Ratner, who returned from a refugee camp and a film festival in Western Sahara, explains the struggle for life, liberty and self-determination by the Saharawi people.

Michael Ratner, who returned from a refugee camp and a film festival in Western Sahara, explains the struggle for life, liberty and self-determination by the Saharawi people. 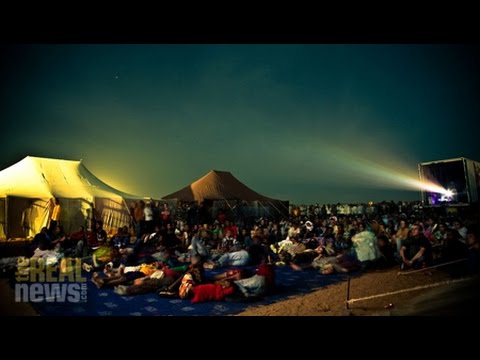 Western Sahara, a mainly desert territory in Northwest Africa which has had decades-long dispute between Morocco and the Algerian-backed Polisario Front is the topic of our next report by Michael Ratner. Michael Ratner’s just recently returned from Western Sahara to Berlin, and he is the President Emeritus of the Center for Constitutional Rights in New York, and U.S. attorney for Julian Assange. He’s also a board member of The Real News Network.

MICHAEL RATNER, PRESIDENT EMERITUS, CENTER FOR CONSTITUTIONAL RIGHTS: Sharmini, it’s always good to be with The Real News. I’m particularly [pleased] with the amazing coverage of Baltimore where you guys are located.

PERIES: Thank you, Michael. Michael, you’ve just returned from Western Sahara. What were your observations?

RATNER: Well, I made my trip just a few days ago. Actually, I came back a couple of days ago. And an unknown struggle to most people, except in the Western Sahara, Morocco, Algeria. The last colony in Africa. And yet hardly anyone, really, in the world pays any attention to it or knows about it.

We went into Algeria and then into the Western Sahara, into a refugee camp where we lived for about a week. Fly to a place in southern Algeria and take a jeep for seven hours through a very, very hot desert. I went as part of a film festival called FiSahara, the 11th year of the film festival. And it’s done really in solidarity with the people of the Western Sahara. The Sahrawi people. About 300 activists go to the film festival. But it’s really about the politics of the situation. Very difficult to get to. The refugee camp is very sparse, it doesn’t really have electricity. It’s a hard life and it’s not much you can do there.

It happened with it, unlike other colonies, or like–[incompr.] like other colonies, is there was a decolonization period in Africa. There was struggle, there was war. Eventually Western Sahara was put on the United Nations Decolonization Committee. It was under the jurisdiction of Spain. But in 1975, Spain essentially gave up and let the Moroccans simply march in. Thousands of the Sahrawi people fled to the East, into Algeria, where they established the refugee camps. Unfortunately, the United States, France, and Spain were collaborators in this occupation.

And what’s amazing is the day the Moroccans marched in was the day after, in 1975, when the International Court of Justice announced that the Moroccans had absolutely no right to the Western Sahara, and that there had to be a referendum to decide what the people wanted to do. Independent country, autonomous with one of the other countries, or whatever they wanted to do. Today, 40 years later, there’s been no, no referendum.

After 1975 the Polisario fought back, and they fought back hard. They forced a ceasefire in 1991, and there was a promise in that ceasefire for a referendum to occur. That referendum, as I said, has never occurred. Instead, Morocco built a wall. A sand berm wall, barbed wire on the top, mined throughout, and it’s 2,500 kilometers long, from north to south. And guess who helped build the wall. United States and another country that’s famous for wall building, Israel.

The occupation continues, and of course continues by Morocco because the U.S. and France let it continue. And they essentially support it. And WikiLeaks actually came out with some diplomatic cables from the United States that illustrated the utter hypocrisy of the United States, claiming all the time that it opposed the occupation but in fact undermining any chance of liberation for the Sahrawi people.

What’s clear to me as an international lawyer is that it’s absolute violation of international law. It was an illegal invasion. And it’s a war crime. And the occupation is illegal. And in addition, the moving of the population of Morocco into the occupied territories is illegal. And today as we speak, Morocco is taking out resources. [Inaud.] phosphate, which are quite valuable in the world, [inaud.] there. Good fishing. And there’s explorations going on for oil.

There’s four important salient points. Makes a very timely story. Just last week there was a United Nations vote. United Nations really has a mandate to hold a referendum. And it has to be renewed every year. It was renewed last week, but of course nothing has happened on the referendum. One of the sad things about that, about the United Nations vote, is it’s the only United Nations mandate that doesn’t include a human rights monitoring part of the mandate. The United Nations officials have no right to monitor the human rights situation in Western Sahara, and Morocco carries out arrests, beatings, et cetera, essentially with impunity. That was really a defeat, but it just shows the utter duplicity of, really, the United States and France, which have ensured that it would be a watered down referendum. That’s one important point.

Second point, which has just come out in the last two weeks which is really astounding, is the Clinton Foundation. The Clinton Foundation got, I don’t recall the exact figure, but I think it’s up to $100,000 or $1 million from a company in Morocco that actually mines phosphate in the Western Sahara. So think about that. Here’s Clinton, she’s secretary of state at one point, and they’re getting donations from the Moroccan phosphate mining company. Doesn’t bode well for U.S. support for independence of the Sahrawi people.

Third, and again, this is positive. There was actually a genocide indictment two weeks ago in a Spanish court which had universal jurisdiction, and a number of the Moroccan [inaud.] appeared–I’m sorry, a number of the Sahrawi people who disappeared were Spanish citizens as well. And therefore the Spanish court had jurisdiction, and they recently indicted eleven Moroccans for genocide. That means those Moroccans cannot leave Morocco. There’s a warrant for their arrest, and there’s what’s called a red alert all over the world. So that’s a positive statement showing that Morocco may not be able to continue to get away with the occupation of Western Sahara.

And the fourth point, what I mentioned, this is the 40th anniversary coming up. So it’s a time, really, for people to really get active on the Western Sahara. I want to remind our viewers, this is very similar to another struggle. That’s the Israel-Palestine struggle. Think about what happened in Palestine. Israel went in and they occupied, they occupied the West Bank and Gaza. They then moved their settlers in, a war crime which is continuing, building settlements. And then they’re taking out valuable resources out of the West Bank. Very, very similar to what’s happened in Western Sahara.

Think about what [inaud.] that sometimes Israel says to countries that claim Israel has to stop settlements. They say, well, if you make us stop settlement, how come you haven’t stopped Morocco in the Western Sahara? They’re really, both countries, both Morocco and Israel, have to end their occupation. And I also–I get hope from this because I remember another struggle of a country like this, and that’s East Timor, which was occupied by Indonesia, and that struggle was won.

So the question of import for the 40th anniversary is what do we do? What will happen [inside], I can’t say. I know that on my visit young people particularly were very, very upset with the UN vote, and the [hopelessness] of what seems to be their situation in terms of the world ignoring it. Yet they have tremendous strength. They haven’t given up the idea of independence.

From outside, we all know what has to be done in these kind of campaigns. There has to be a campaign towards Morocco. End the occupation of the Western Sahara. And of course, the United States and France. Start supporting in a real way, not just a fake way, the independence of the Sahrawi people.

PERIES: And Michael, you were saying that the UN actually has no monitoring role in Western Sahara. How does one go about advocating for that?

RATNER: Well, that’s a good question, Sharmini. I mean, people tried this last year. All the solidarity groups there are, particularly in Spain and otherwise, you know, went to the UN people who make the decisions. The Security Council people, which is really the U.S. and France, and said you have to include a human rights monitoring role. Particularly [look at] eleven people who were indicted for genocide. The situation from a human rights point of view is terrible. And it’s unimaginable to me how we would allow one country to occupy another, Morocco to occupy Western Sahara, and let them really at will do what they want to the people who remain in the occupied territories. It’s remarkable that there’s no monitoring role for that.

But of course, that’s only part of our problem. The big problem here, it’s been some 40 years now. The people who fled from the occupied territories are getting old and they’re dying, and many of the people in the refugee camps have no experience of what their life was actually like when they were in the much richer, lusher area that is now occupied Western Sahara. The area, part they’re in now which is east of the wall, east of the 2,600 kilometer berm wall, it has no access to the water and the Atlantic Ocean. It has far fewer resources. It’s a very small piece of land that is really only, you know, really Southern Algeria’s refugee camps.

So again, this is a struggle that I believe can and should be won. But it’s going to take a lot of pressure. I don’t think the UN or the big powers are going to do it without tremendous internal organizing inside Western Sahara as well as much bigger movement outside. It’s 300,000 or 400,000 people, and some people say it’s a struggle that the world has forgotten, but it also has to be remembered it is the last colony in Africa.

PERIES: Michael Ratner, thank you so much for going there and for this report, and shining the light on such a grave problem. And for those of you interested in this topic, we’ve done a couple of segments on the Western Sahara on Global African on the Real News Network.

Thank you, Michael, for joining us today.

RATNER: Thank you for having me on The Real News, Sharmini.

PERIES: And thank you for joining us.