Ratner: 155 Prisoners, Almost All Held Without Charge, Must be Tried or Released - Immediately

Ratner: 155 Prisoners, Almost All Held Without Charge, Must be Tried or Released - Immediately 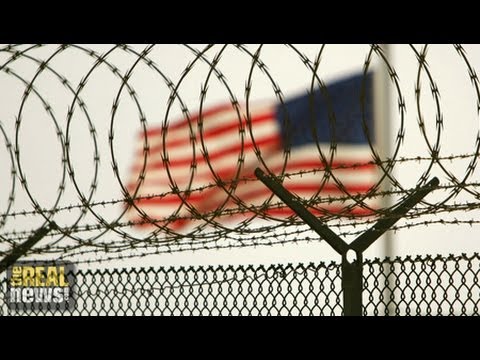 KAYLA RIVARA, TRNN PRODUCER: Welcome to The Real News Network. I’m Kayla Rivara in Baltimore. And welcome to this latest edition of The Ratner Report.

Now joining us is Michael Ratner. Michael is the president emeritus of the Center for Constitutional Rights in New York and the U.S. attorney for Julian Assange. He’s also a board member and regular contributor for The Real News Network.

Welcome to the program, Michael.

RIVARA: So Saturday marks the 12th anniversary of the Guantanamo detention center, where some 155 detainees still remain without charge. Can you discuss this, where we’ve come and where we’re going in terms of the situation in Guantanamo today?

The Center for Constitutional Rights and I were involved in the first cases. That’s 12 years ago. It’s hard for me to believe. And I never would have expected that it would be continuing to this date and that the principles that underlie it would become part of our, quote, legal system, if you can call it that, any longer.

It was on January 11, 2001, that the first people were taken to Guantanamo. We probably all remember the pictures, or those of us who are old enough do, of being strapped down in those big transport planes, you know, having been tortured and beaten before they got there.

This 12th anniversary is a dark anniversary. As I said, it’s outrageous that it’s still open. Of the 155 people there, over half–think about this–have been cleared for release by our own government. That means they shouldn’t be there. And a lot of those people have been there 11 and 12 years, and they’ve been cleared, and yet they remain.

Of the other half, only a handful have been charged with any crimes. Only a handful. The rest are just being indefinitely detained without any charges or trials.

One thing I think we should all consider is that even if by some miracle–and that’s what it would take, and I’m not a believer in miracles–that it were closed next year or by the time Obama leaves office, we still have to think about what the cost was. Just remember, 700 people, more than 700, went through Guantanamo and had their lives destroyed. They were torn from their families, torn from their friends, torn from their culture, torn from their own countries, and some died.

It really–Guantanamo, and, of course, you can add to it, you know, Bagram, where we also have a major detention facility, shatters any claim that the U.S. has acted justly or lawfully. The U.S. is a rogue nation now, where principles that underlie justice have just been utterly eviscerated.

When you think of the United States and you think of Guantanamo and, of course, as I said, of Bagram or drones or renditions or the wars we’ve fought, the best precedents that come to mind are not precedents of fair trials or justice, but precedents like Pinochet’s Chile, Franco’s Spain. That’s what we have become in terms of a, quote, system of accountability, justice, and fairness.

And, again, think of the principles and the gross crimes that were carried out against those people at Guantanamo. They were all kidnapped, essentially, kidnapped and taken illegally to Guantanamo without a court and kidnapped in the most brutal ways, as we saw those pictures of people tied down in the planes. Then they were tortured at Guantanamo, routinely tortured under what are called the Rumsfeld techniques–former secretary of defense. And he remains uncharged and untried for committing and authorizing that kind of corruption.

And today, as we speak, the concept of indefinite detention–since when in the world that I grew up in, in the world that I was raised in and law schools, good law schools, since when do you have a situation where you can hold people for year after year, no charges, no trials? It’s been accepted in this country. And let’s not kid ourselves; that’s who the U.S. has sadly, sadly become today.

I want to take a step back and just quickly look at some of the origins of how we got here. Of course, the origins of Guantanamo as a physical place–probably well known to all the viewers. It was stolen from Cuba after the U.S. went into Cuba, supposedly to help them win the war against the colonial country of Spain. Of course, we stayed longer than we should have, stayed, really, until the Cuban Revolution. But as part of that whole deal, we took Guantanamo. That’s under complete U.S. jurisdiction and control.

The recent origins of the current detentions is a military order, Military Order No. 1. It was issued on November 13, 2001. And I remember waking up on November 14, 2001, and being astounded. The country had a coup, essentially. President Bush issued a military order saying that the secretary of defense could pick up whomever the president designated anywhere in the world and hold them indefinitely in some prison. Turned out to be Guantanamo. An astounding power. Basically, that’s the world war on terrorism–anywhere in the world, people to be picked up. That was one part of the military order. And those people never had to be tried.

The second part said that if you’re going to try anybody, they’re tried in these special rum courts, military commissions that are continuing at Guantanamo, of which we’ve only had a handful, none to completion as trials. A few guilty pleas. Completely worthless. Kangaroo, rum courts.

And what was shocking to me when that military order came down, which is the founding document for Guantanamo, is all kinds of people just refused to object to it, and even endorsed it, went to Congress and said, oh, yeah, we need a little fiddle with it here and there, but we like this idea of Guantanamo, we like this idea of military commissions.

On January 11, 2002, pursuant to that order, the first prisoners went to Guantanamo.

The Center for Constitutional Rights, where I worked, we decided to take on the first cases. And it’s significant. The Center took a big risk in its own–in taking on those cases. We were afraid we’d lose the funding. The country was ready to kill us for it. Every TV or radio show I went on, they said, you go to Guantanamo, you let them kill you, you let them do this. The Center was the only human rights organization in the country willing to take on the Guantanamo cases.

Yes, we won some rights from those cases. The main right I would think we won was not necessarily habeas corpus, the right to test your detention. That got us some good, but not what I would have wanted. The main right we won was getting lawyers to Guantanamo, because that at least stopped the worst kind of torture. So it was worthwhile bringing it.

But we certainly didn’t close it. Guantanamo remains open today because the president, who has the right to transfer anybody he wants out of there, the courts, and Congress have willingly ignored fundamental rights and involved themselves, deeply involved themselves in the criminality of the continued detention of people at Guantanamo.

Now, some people would say, well, recently there’s been some movement on Guantanamo. Some people, at least, have been freed. And yes, it’s true: eight people, eight had been freed since May when the president made a speech saying Guantanamo is an embarrassment again and again. He says this all the time. We have to close it. But it was a promise that was only made after there was a huge hunger strike at Guantanamo. People were force-fed in the most cruel fashion. And then it got on the front page again, and the president was forced to make a speech that he was going to close it again.

Three of those eight–think about this–three of those eight were known as the Uyghurs. The Uyghurs are people from Western China. They’re Muslims. They have a separatist movement there for more rights or for even a separate country. The Chinese [incompr.] The U.S. picked up 23 Uyghurs in Afghanistan, around the world, and I presume they kept them there in part because of the Chinese. They had no case on them. They were not terrorists. The U.S. has known that forever. Finally, the last three of those 23 were released from Guantanamo.

But the U.S. has known since the beginning that they shouldn’t have been there. And, in fact, my office, the Center, issued a release the other day saying those three were kept there or they were all kept there because in 2003 the U.S. said to China–or China said to the U.S., keep them there and we won’t veto your efforts to go to war with Iraq. So they became, these innocent Uyghurs, a political football.

And where are they today after their families, their culture, their country has been destroyed? Where were they sent? Some went to Albania, some went to Palau, some went to Bermuda, and the most recent ones went to Slovenia. Just their whole lives, really, just shattered.

You know, I think about it a lot and I think about, again, we’re calling 155 people remaining there. And one person who I just–I just have one person who I’ve been working on his behalf for a long time, trying to think about why is he there, is Shaker Aamer. He’s a U.K., British resident picked up in February 2002, almost 12 years there. He’s been cleared twice, twice, once under Bush, once under Obama, and he remains there.

You know, I just saw the movie Twelve Years a Slave, and I saw what 12 years of taking away a person from their entire life meant. The person’s children grew up without their father. His life was really shattered from that experience. Shaker Aamer has been 12 years almost away from his family in London. He hasn’t been with his children for that period of time.

So this week, as we remember the 12th anniversary of Guantanamo, and every week and every day, we have to renew our efforts to shut it down and shut down the inhumanity that it represents.

There’s two sources I would recommend going to. One had been the most militant, best people opposing it, which is the Witness Against Torture people, as we speak, that are fasting, going on in Washington. There’s activities every day. There’s vigils all across the country. Go to their website, Witness Against Torture. And, of course, my own office, the Center for Constitutional Rights, supports those efforts and has its own efforts that you can do at the Center’s website. But really I recommend absolutely going and doing both.

You know, we all ask ourselves what did people do at various times in their lives, whether it’s around slavery or the Holocaust or other atrocities, and you see how people remained silent. This is not a time, with regard to Guantanamo, to remain silent.

RIVARA: Michael Ratner, I want to thank you so much for joining us.