Did Canada cave under US Israeli pressure?

Michael Ratner: Canada gave in to pressure from US ambassador

Michael Ratner: Canada gave in to pressure from US ambassador 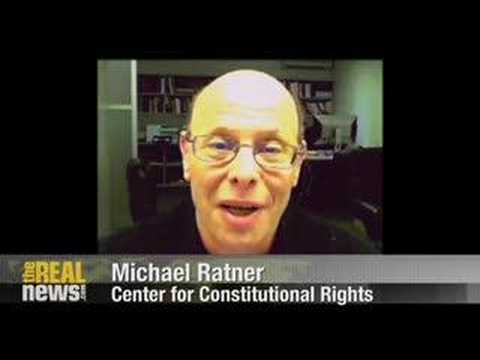 ZAA NKWETA, PRESENTER: A Canadian Foreign Affairs training manual has created a diplomatic firestorm. At issue is a list of countries with possible torture and abuse cases. The list includes the United States. The manual was inadvertently released to lawyers from Amnesty International working on a lawsuit involving alleged abuse of Afghan detainees by Canadians. US Ambassador to Canada David Wilkins has stated that the inclusion of the United States is absurd. Canadian Foreign Affairs Minister Maxine Bernier promptly issued an apology, stating that the manual will be reviewed and rewritten. The Real News spoke with Michael Ratner, president of the Center for Constitutional Rights and a leading expert in international law and torture and abuse cases.

MICHAEL RATNER, PRESIDENT, CCR: This is about a 92-page booklet about how to look for torture. It includes forms and all this. And the booklet is in large part based on US torture. Another thing the manual does, actually, is list a certain number of techniques that it considers abusive interrogation or torture. Of course, if you go down that list, it’s hooding, stripping, blindfolds, sleep deprivation, isolation, not even the worst things that the US is doing—waterboarding—but bad things, and the manual considers those to be torture. And those essentially line up with what the US has authorized for use in Guantanamo and very likely were used against the Canadian citizen that remains in Guantanamo, Omar Khadr. One reason it’s really important, I think, for the Canadians to keep both the US and Guantanamo Bay on the list is, first of all, there’s a Canadian citizen right now in Guantanamo, Omar Khadr. And there’s also other Canadian citizens and residents who may or may not be picked up in the so-called 9/11 wars. And what Canada did here was really—I mean, I’m really in shock. I mean, I already thought—at least I’ve always thought that Canada had a semblance of democracy and of genuineness around these issues of torture, particularly after the Arar case. And what they apparently did here was, as soon as they got a complaint from the United States, that the United States didn’t want to be on the list of countries that might possibly be involved in torture, within one day, 24 hours as far as I can tell, they took the name, or they’re apparently taking the name of the United States off the list, along with the name of Israel as well. And they must be taking the name of Guantanamo off the list. And what’s really shocking to me, just shocking, is that it’s the Arar case, the Maher Arar case, where Canada acknowledged that it had wrongly cooperated with the United States in that case, and its diplomats hadn’t noticed that Arar had been tortured. And this entire module that the Foreign Affairs was using to train its diplomats is really because of the Arar case and the recommendations of the commission that looked into the Arar case. And in the US, torture is now being removed. The US is just being removed from the list. I mean, there should be just people in Canada screaming at the government about this, just screaming. It’s pretty shocking that the United States ambassador picks up the phone or says something publicly and is able to essentially change what the truth is, basically change the facts, and say despite the fact that you know about Iraq, that you know about Khadr in Guantanamo, or we know torture was an everyday technique used for interrogation in Guantanamo, that one phone call, Canada would just fold when it actually, as I said, was sort of heroic for us in the United States, that our northern neighbor who had its citizens, at least Arar—and it didn’t protect Arar initially—that it then went ahead and did. Well, we’ve known for a long time that the United States is engaged in torture. I mean, it’s public, and they actually probably want the world to know, because they’re using it as a technique of terror. We have all the documents, we have Rumsfeld techniques; we have all the testimony. But the fact that another country and an ally of the United States, in fact one of our closest allies, Canada, has actually labeled the United States as a place you have to look to for torture and Guantanamo is a place you have to look at certainly helps the political process of impeachment in the United States, as well as the ultimate accountability that our government, that the Bush administration, is going to have to pay.