The British anti-terrorism measure Schedule 7 has just been used to convict Muhammad Rabbani for an offense that has nothing to do with terrorism: refusing to give authorities his computer password

The British anti-terrorism measure Schedule 7 has just been used to convict Muhammad Rabbani for an offense that has nothing to do with terrorism: refusing to give authorities his computer password 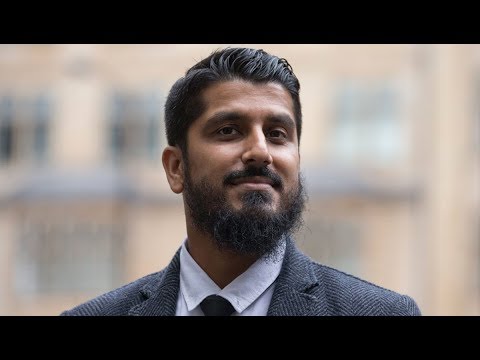 AARON MATÉ: It’s The Real News. I’m Aaron Maté. A British anti-terrorism law has just been used to convict someone for an offense that has nothing to do with terrorism. Muhammad Rabbani is the international director of the group CAGE. Last year, Rabbani flew into London after going on a trip overseas to investigate allegations of U.S. torture. He was arrested after refusing to hand over the password to his laptop. For that act, Rabbani was just found guilty of a terrorism offense.

Under Schedule 7 of the British Terrorism Act, you can be detained for up to six hours, you have no right to remain silent, you have no right to a lawyer, and refusing to answer any question or provide passwords to electronic devices is itself an offense. Muhammad Rabbani spoke out after the verdict.

M. RABBANI: Today’s judgment based on the judge’s and prosecution’s acceptance that I am of good character and worthy of belief highlights the absurdity of Schedule 7 law. They accept that at no point was I under suspicion and that, ultimately, this was a matter of having been profiled at the port. There are important implications for our collective privacy, as Schedule 7 acts as a digital strip search.

I took the decision to not raise the details of an important torture case before my arrest. Ultimately, I have been convicted of protecting the confidentiality of my client. If privacy and confidentiality are crimes, then the law stands condemned. CAGE and I are glad we brought this case and the result indicates that our only option is to change the law.

M. RABBANI: Thanks very much for having me on. The verdict basically means I am actually guilty of a crime and that crime is a terrorist crime, and that terrorist act is my refusal to not hand over my password and to protect the privacy and confidentiality of others. As I said at the closing statement after court, I said that it highlights the absurdity of terror laws, in the U.K. at least, and we plan to challenge that. We have already submitted our first round of documentation connected to our appeal, and we will formally announce it very soon, as soon as the court accepts it.

AARON MATÉ: Did the prosecution acknowledge that you weren’t suspected of any terrorism activity?

M. RABBANI: Yeah, on actually three or four occasions, when the judge asked and my barristers asked, each time, each police officer that was being asked confirmed that, first of all, they knew who I was, they knew that I worked for CAGE and they also understood the nature of that work and that we have a long history in defending victims of torture and abuse from state crimes.

Secondly, they confirmed that I was never under any suspicion. Even in court while I was the defendant, I was actually not suspected of any formal crime [inaudible 00:03:29].

AARON MATÉ: Right, so the officers testified in court and there was even some glaring contradiction in their testimony?

M. RABBANI: In the beginning, they began by giving the impression to the court that they didn’t know who I was. My defense, part of my defense was that they knew very, very well who I was and who I work for and the nature of that work. Therefore, they should know that I will be in possession of documents and material, some of which will be legally privileged, some it will be confidential and sensitive and so on.

They began the court hearing by giving the impression that they didn’t know who I was and it was just a random stop, but upon insistence from my barrister and eventually the judge herself, they had to confirm that actually they did know who I was very well, they did know what organization I worked for and the work they we did. Then the judge asked, “What’s the reason, then, that you stopped Mr. Rabbani?” At that point, they just gave the stand and replied, “We can’t confirm or deny what the reason is.”

AARON MATÉ: The reason you were coming back on that trip was you were investigating allegations of U.S. torture in the Middle East, if I have that correct?

AARON MATÉ: If I recall right, you even offered to cooperate with the authorities who stopped you in some way, but you just had some red lines when it came to protecting your client’s confidentiality. Can you talk about that?

M. RABBANI: That’s exactly as it was. I am bound by the law, or coerced by law, to cooperate and comply with all the provisions, and I have. There’s no allegation against me of that. The red line was, when it comes to other people’s information and other people’s privacy and confidentiality, that’s something I can’t, I don’t have the right to surrender that. It’s immoral, it’s unethical, it’s not professional, either, and it actually goes against all the standards and ethics of many professions, including the legal profession, the medical profession and all types of professional roles where a person is responsible for another member of the public.

That was the red line and I made that clear to the court as well of that. If I had been given the option, choice, to obtain consent from those particular survivors of abuse, then I would have taken the option, got their consent and then complied. I think that would have been the moral and ethical thing to do. Of course, I was denied the option, which then meant I had no choice but to refuse my passwords.

AARON MATÉ: There is irony upon irony here. You were investigating allegations of U.S. torture, which have been done under this global rubric of fighting terrorism, and with that has come torture and harsh surveillance and increased monitoring and laws like Schedule 7. You’re also known as someone who’s been challenging British anti-terrorism laws and here, all this sort of converges together and you get charged under that law, and you then fight it on the stand, as you just did. Let me ask you, what are the wider implications of your conviction? What does this mean for the thousands of other people who will be likely subjected to stops and searches under Schedule 7?

M. RABBANI: I think just one timely thing to mention is that you can see how society has been prepared and primed to respond to terrorism, the idea of terrorism and how it’s so discriminatory. You found, in my case for example, I am now a convicted terrorist, technically speaking, even though the very court that convicted me affirms that I’m not a threat to anybody, affirms that I didn’t actually, I wasn’t involved in any sort of crime.

So you have that situation, and then you have another situation where a man goes out and kills people indiscriminately in Las Vegas and the media, the [inaudible 00:07:54] establishment, commentators in general, are very reluctant to call it terrorism. Society has been primed to respond in this very disproportionate and almost irrational way to the idea of terrorism and [inaudible 00:08:12] violence, and that’s what we need to correct. That’s one indication. I think as general people, members of society, need to think what kind of future are we trying to create and how much are we going to allow our governments and states to use the pretext of terrorism to grab power for themselves and away from ordinary citizens.

The second thing is about privacy. Privacy and mass surveillance have been hot topics after the Snowden revelations when, prior to that, people would have a more sympathetic understanding that our governments are there to protect us, but actually it turns out that they’ve got so much power, they’ve been abusing that power in the dark corners that we don’t see. They’ve been treating their entire population almost as criminals and taking all of their data. This case is part of that story and what we’re going to be doing is challenging it in the higher courts.

Hopefully, there will be a court that actually recognizes this and is brave enough to make the correct ruling and we address that balance so that people’s privacy, when they’re traveling through borders, is protected, unless there is a criminal allegation and everybody can understand that. If there is a real and criminal threat or there’s suspicion of a crime and there’s evidence to substantiate that, then, of course, you can, within some bounds, violate privacy in order to protect society. In Schedule 7, there is no suspicion needed, and that was proven in my case. We want to change that. We want to hopefully pursue this until there’s a precedent that we can secure which will benefit at least all the people who live in Europe.

AARON MATÉ: On that point about personal privacy, there’s one aspect I want to ask you about, which is there have been some concerns raised about Schedule 7 that it’s created an opportunity for British authorities to essentially make a backdoor database of biometric data, taking people’s fingerprints and such. Is that a fair concern?

M. RABBANI: Very much so. In fact, one aspect of what happened to me, which we didn’t actually focus on because I was concentrating on the survivor of torture, but in the same Schedule 7 stop, I was also asked to surrender my DNA, I was asked to surrender my fingerprints, as are thousands and thousands of travelers who just stopped under Schedule 7. I actually, again, I refused. I refused on a different basis. They call it intimate samples. You can’t take this from me by metric data. While they assured me that I’m not a criminal, I’m not suspected, but then you take that data and then put it in a database, where there are data belonging to rapists and murderers and other people. How can this be right? I actually refused that as well just from that principle basis.

In summary, what you’re saying is very true, there are real concerns. The Intercept, one week before my trial, actually published a report. They managed to find a link between Schedule 7 search procedures and GCHQ. GCHQ is the British equivalent of the NSA of the U.S. What happened is the British officers copied the data from their devices and just routinely send it to this spy agency called GCHQ. These have serious implications for the respect for privacy of ordinary people just going about their business.

AARON MATÉ: We have to leave it there. Muhammad Rabbani, international director of the group, CAGE, we’ll certainly check back with you soon to get an update on your case. Thank you.

M. RABBANI: Thanks very much. Thanks for having me.

Muhammad Rabbani has spent his life committed to promoting the welfare of his community and upholding the fundamental principles of due process and the rule of law. He worked within his community mediating between gangs to end cycles of violence and reach peaceful solutions to the issues they were raising. He has consistently maintained and…