And ... "Why are countries failing to act with any sense of urgency?"

And ... "Why are countries failing to act with any sense of urgency?" 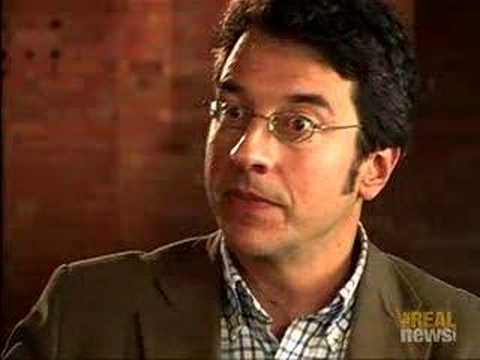 VOICE-OVER: George Monbiot is a weekly columnist for The Guardian and the author of Heat: How to Stop the Planet from Burning. He joins Paul Jay to discuss the book in the Real News studio.

PAUL JAY, SENIOR EDITOR: What do you think the world will look like in 2050?

GEORGE MONBIOT, AUTHOR: You can’t be definitive about it, because the current path could go in various different directions. There’s no fixed path that we’re on. But there is a high chance that if we don’t restrain climate change to the sort of level that I’m talking about, we will see a net global drying, a significant drying trend across the world as a whole. Not everywhere. Some wet places will become wetter still. This means, first off, that in many parts, particularly in Africa, we’ll see crop failures. If those crop failures are sufficiently widespread, we could see the possibility of a global food deficit. You must remember that at the same time human populations will continue to rise. And it is beyond my powers of description to tell you what a world of nine billion people in net food deficit would look like. It makes all previous human crisesï¿½wars, acts of genocide, famines, plaguesï¿½look like sideshows at the circus of human suffering. We haven’t been there. We’ve never been at a point quite like that before.

JAY: Why do carbon emissions cause global warming? Just in simple terms.

MONBIOT: Over the last many hundreds of millions of years, biological matter has accumulated. As plants have grown and absorbed carbon dioxide, turned it into the organic molecules which make those plants up, and then died and been covered with sediments and have rotted in oxygen-free environments, that carbon has been accumulated. And it’s been accumulated in the form of coal, and oil, and natural gas. As we extract that, we are turning many millions of years’ worth of accumulation into a sudden pulse of carbon dioxides. If we released it at the same speed at which those plants absorbed it, there wouldn’t be a problem, but it’s because we are burning it very, very quickly, we are releasing every year millions of years’ worth of biological accumulation. And we are thereby enhancing the world’s natural greenhouse effect so that more and more solar radiation is trapped within the atmosphere. The key is to prevent that from going past that certain point, that tipping point, that threshold which scientists now identify as being roughly at two degrees above pre-industrial temperatures.

JAY: We’re already on the way to two degrees. Where are we now in relationship to that two degrees?

MONBIOT: Right. Well, we’re at about 0.7 degrees above pre-industrial temperatures. We’re almost certainly headed to 1.3, 1.4 degrees, even if we were to stop right now, because of the carbon dioxide we’ve already produced. Bringing it down, bringing our emissions down so that we don’t go beyond that two degree point isï¿½the whole thrust of this book is how we do that. We need a worldwide cut of 60 percent by 2030, which translates, if those emissions are to be spread evenly, into a cut of 90 percent in the rich nations. And that derives from figures, which are now broadly accepted across the scientific community.

JAY: The science seems so clear. The situation is urgent. But certainly most people don’t feel it. People are mildly aware of it. I know in the US, polls seem to say 30-35 percent of people will answer that it’s urgent. It’s a little higher in other countries. If it was really so high, I think you would see far more political pressure on governments to be doing something about it. So even if people can answer a survey, ï¿½Yes, it’s urgent,ï¿½ they go about their life. Why aren’t people feeling this urgency?

MONBIOT: Because they know in their heart of hearts this, they understand this awful paradox of climate change, which is that most of the nations, which are rich, are in the temperate parts of the world. The temperate parts of the world, which are largely responsible for the problem, are the ones, which are going to get hit last and least by climate change. If we lived in tropical countries, if we were in the tropics, we would have acted on this by now.