Moneen Nasmith, attorney for Earthjustice, talks about the importance of stopping the Constitution Pipeline, which would have transported fracking gas from Pennsylvania and affected 251 waterways, along with many other environmental impacts

Moneen Nasmith, attorney for Earthjustice, talks about the importance of stopping the Constitution Pipeline, which would have transported fracking gas from Pennsylvania and affected 251 waterways, along with many other environmental impacts 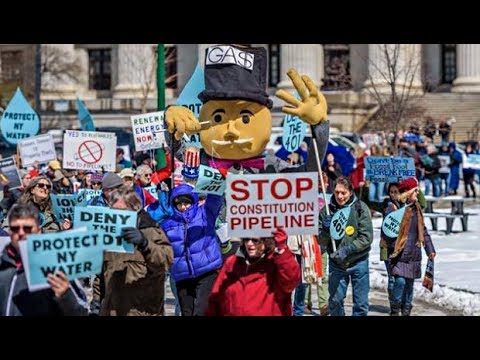 DIMITRI LASCARIS: This is Dimitri Lascaris for The Real News. On Friday of last week, August 18th, the United States Court of Appeals for the Second Circuit upheld the New York State Department of Environmental Conservation decision to block a 124-mile natural gas pipeline project from moving forward in New York State. In April 2016 the New York Department of Environmental Conservation denied the Constitution Pipeline’s requests for a necessary clean water act permit because of the potentially devastating impact this pipeline could have on the environment. The Department concluded that the company failed to meaningfully address the project’s profound water resource impacts.

Now here to discuss this important environmental victory with me is Moneen Nasmith, a staff attorney with Earth Justice. Moneen’s work focuses primarily on matters relating to the environmental and health impacts of oil and gas development. She has represented community environmental groups in a variety of matters, including proposals for underground natural gas storage in New York, and crude bi-rail terminals. Thanks for joining us today, Moneen.

MONEEN NASMITH: Thank you for having me.

DIMITRI LASCARIS: Let’s start, Moneen, by discussing the pipeline project. In general terms, what was the planned route of the project, and what was it intended to transport and what market was it primarily intended to serve?

MONEEN NASMITH: This was a pipeline that was intended to go from the gas fields in the Marcellus Shale in Pennsylvania, across multiple counties in New York, and with the stated goal of serving markets in both New York and New England. It’s … You already said this, but it’s about a 125-mile pipeline and would have crossed about 251 different water bodies in New York State alone.

DIMITRI LASCARIS: What precisely was the potential negative environmental impact of this project?

MONEEN NASMITH: The precise, the environmental impacts of the project are many. With respect to what the decision has to do with, it really focused on water quality because that’s the authority that New York has under the Clean Water Act, and the concern really was the effect that this pipeline would have 251 crossings. Every time you potentially cross a water body you are having to dig a trench, essentially through that water body. New York State was justifiably very concerned about the impact that would have on particularly erosion, and how much turbidity, or just silt, would end up in these waterways, how that would impact the current status of those waterways in terms of would they still be fishable or drinkable or swimmable, depending on what their current state is. There are lots of other environmental impacts associated with this pipeline that weren’t the focus of DEC’s decision here, including significant climate impacts, air quality problems, loss of trees and habitats. It’s a really potentially very environmentally devastating project.

DIMITRI LASCARIS: What role did your organization, Earth Justice, have in this legal battle?

MONEEN NASMITH: We’ve been involved in the various parts of this legal battle for quite some time. We were involved representing a group of clients from both Pennsylvania and New York in front of the Federal Energy Regulatory Commission, that is, the federal body in charge of reviewing natural gas pipelines that cross state lines. We submitted lots of comments to FERC describing the environmental impacts and all of our concerns, including impacts to water bodies. We were working behind the scenes with respect to the New York State’s consideration of the water quality certification. Once the company decided to challenge the denial of its water quality certification we represented three local New York groups before the court, the Second Circuit Court of Appeals, and we also have another case that is still pending against FERC, challenging its decision to approve the pipeline.

DIMITRI LASCARIS: Has the Environmental Protection Agency or any other department of the Trump Administration had anything to say about this project? Do we know what their view of the project is?

MONEEN NASMITH: So far this case has been going on for long enough that it predates the Trump Administration in terms of when EPA or any other body of the federal government would have weighed in. Both EPA did raise some concerns with FERC, including about water quality, and the Army Corp of Engineers denied Constitution’s permit for a dredge and fill permit under Section 404 of the Clean Water Act, because New York had denied the 401 permit. All of that, though, predated the Trump Administration, so I don’t know if the Trump Administration or any officials of the Trump Administration have weighed in on this particular pipeline, but the federal government’s role is largely done. FERC approved the pipeline, and so from the Federal Government’s standpoint this pipeline could have gone forward. It’s really the authority that the state here has to protect its water resources that the Clean Water Act gives them, and so it’s really … This dispute has been so far about what the state’s authority is and whether or not New York’s decision can be upheld under the statutes, which the court found, if they could.

MONEEN NASMITH: I think the proponents of the pipeline project are certainly going to continue the fight. I don’t think that this pipeline will ultimately end up going forward because while they might try, they don’t really have much more to go on. They will, I’m sure, exhaust every possibility, but the decision here was not just a win. It was a really resounding rejection of the arguments that the company has been making to date. I’ve no doubt that they’ll try them elsewhere, but this really is a huge, huge win for both the State of New York and the environmental communities that have been fighting this pipeline.

DIMITRI LASCARIS: Can you just, in closing, just give us a real quick sense of the core of the argument that they advanced and that was rejected by the Second Circuit?

MONEEN NASMITH: Sure. They did advance a number of arguments. Some of them the Second Circuit didn’t dive into as much as others, but in general the really important piece and the core of what’s important going forward is that the company was trying to argue that because FERC had signed off on the pipeline, that New York really couldn’t say no. Also, that New York’s job and role here was really, really narrow and limited to looking at only a few things that were directly related to water quality. The court rejected both of those arguments and very clearly upheld the state’s ability to look at a wide range of factors that all very reasonably feed into the ultimate determination of is this pipeline going to degrade the quality of water in New York State, or not. New York found, and the court also upheld, that New York very reasonably had asked this company multiple times for information about that question and that the company had just stonewalled them, and so New York had no choice but to say, “I’m sorry, we can’t affirmatively find that your pipeline is okay under our standards.”

DIMITRI LASCARIS: This has been Dimitri Lascaris speaking to staff attorney Moneen Nasmith of Earth Justice about an important environmental victory in the Second Circuit Court of Appeal. Thank you very much for joining us today, Moneen.

MONEEN NASMITH: Thank you so much.

DIMITRI LASCARIS: This is Dimitri Lascaris for The Real News.

Moneen Nasmith joined the Northeast regional office of Earthjustice in September 2012. Her work focuses primarily on matters relating to the environmental and health impacts of oil and gas development. She has represented community and environmental groups in a variety of matters, including proposals for underground natural gas storage in New York, crude-by-rail terminals, and…