Jubilation in the streets as Army removes Pres. Morsi and suspends constitution, some Egyptian TV stations shutdown by military forces

Jubilation in the streets as Army removes Pres. Morsi and suspends constitution, some Egyptian TV stations shutdown by military forces 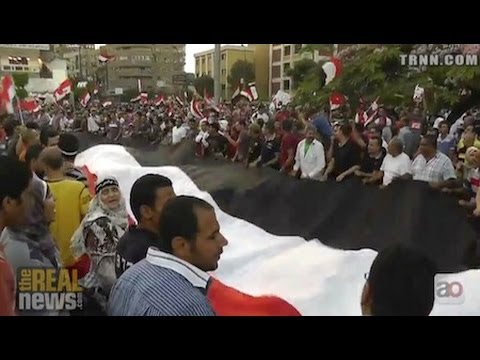 Egyptian President Mohamed Morsi has been overthrown in a military coup. The country’s constitution has also been suspended as the military acts on a 48-hour deadline set on Monday in wake of the massive protests that happened on June 30, in which millions of people came to the streets demanding Morsi step down.

Now joining us from a few blocks from Tahrir Square is Mohamed ElMeshad. He’s an independent journalist based in Cairo, Egypt. He worked for two years for Egypt Independent.

Thank you for joining us.

NOOR: Now, can you give us a sense of the mood in Cairo right now? just a few hours ago it was announced that Mohamed Morsi, the president of Egypt, was removed from power by the Egyptian military.

ELMESHAD: Well, in a sense it depends on where in Egypt you mean. If you’re talking about downtown where I am, it’s complete jubilation–music in the streets. Fireworks have been nonstop for the past, I would say–I mean, well, for the past two hours, I guess. Most parts of Cairo, I would say, there’s celebrations. It’s very jubilant. If you look at the pro-Morsi demonstrations, obviously it’s the complete opposite. So that really depends and what you’re talking about.

NOOR: And there’s been some reports of clashes. Al Jazeera’s reporting four deaths and seven injuries in the northern area of Egypt. Can you talk about anything you may have heard about any violence between pro-Morsi and anti-Morsi forces?

ELMESHAD: Well, in the northern parts of Egypt, the [[email protected]@], there’s–the security forces have much less of a hold. What happened–what the military did here is kind of they played a masterstroke in terms of where the pro- and anti-Morsi demonstrators are. Before the statement was given, the military deployed especially around the areas where pro-Morsi demonstrations were happening and the sit-ins were happening. What they did in the main demonstration is before going in they fired warning shots. They kind of–they took control of the entries and exits, frisked everyone going in. They did not–they didn’t act violently, according to reports from people there, but they made sure that groups didn’t leave, they made sure that those who were leaving left without anything they could inflict any harm on anyone else with. So there haven’t been clashes to my knowledge inside of Cairo. Nothing major, significant, big yet has to be added to that.

Aside from clashes, to be fair to the Muslim Brotherhood, one thing they feared–and it seems that it’s almost rightfully so at this point–is that there would be a security crackdown on them. And indeed there have been many reports of travel bans for Muslim Brotherhood leaders. The second or right after the statement was issued, all of the Muslim Brotherhood TV stations and allied TV stations, mostly religious ones, were shut down. I have personal–my sources tell me that they were–there have been arrests, at the least six–I’ve also heard up to 36 arrests–of just media personnel, reporters, producers, administrators working in the Islamic channels by the military and the Interior Ministry.

NOOR: Now, what’s the sense about what the future will hold, the next days and weeks will hold for Egypt?

ELMESHAD: I mean, one thing, for anyone who watched the–who listened to the statement and watched it or read it is that a timeline was not given. So it’s very difficult to tell. One thing that we have learned is that there’s always an immediate sense of jubilation like what happened in February 11, 2011, and the fact that the shortsightedness of the revolutionaries especially meant that there was no clear sense of what would happen. So what we’re hoping is that this isn’t the doomsday scenario that the Muslim Brotherhood supporters envisioned for themselves, because if that’s the case, then we’re dealing with a wounded lion and there’s no telling how they’d react. So we’re hoping that as what has happened today in Cairo, that the military would maintain this sort of wise outlook or wise approach to the Muslim Brotherhood supporters.

As for, like, the official proceedings, we know that tomorrow the head of the supreme constitutional court will take power. Everything else has just been dealt with vague terms such as shortly, transition period. We don’t know.

NOOR: What can you tell us about the meeting that the Egyptian military had with some of the civilian opposition to the Muslim Brotherhood? Supporters of the Tamarod said they do not want to exclude anyone in whatever agreement or deal comes out of this military coup. Can you give us your thoughts?

ELMESHAD: Let me just make a clarification that I feel like, well, to me sort of always grates me when I hear it about Tamarod, and that Tamarod, it’s different. It’s not a political group, and it’s not even a movement, really. It’s kind of like a steering committee, a way for those who just are completely dissatisfied with Morsi’s rule to express it.

However, they have gained a lot of clout for what they’ve done. This is another sort of–it’s seen by many analysts as a masterstroke from the Supreme Council of the Armed Forces is that they have met with not only political figures but, significantly, the two main religious figures, who are the head of Al-Azhar, the largest Sunni institution, the largest Muslim and Sunni Muslim institution in the world; the head of the–the Pope, the Coptic Pope in Egypt, who is the spiritual guide, spiritual leader for about 10 million Coptic Christians in Egypt; along with the Salafi party, Salafist Nour Party, who are a legitimate party. They’ve played massive role in politics recently, along Mohamed ElBaradei, obviously.

NOOR: And finally, can you tell us about the legacy of the military and where the revolutionaries stand with the fact that the military is now back in power in Egypt?

ELMESHAD: Well, one interesting anecdote I’ll tell you is that right after the minister of defense, Sisi, gave his address or declared the ultimatum two days ago, a group of revolutionary socialists went down to the streets in a semi-sarcastic but semi-really serious tone of chanting, “Down with the”–I mean, holding slogans that said, “Down with military rule”, which is what we were chanting for about a year after Mubarak was ousted. So this is a reminder that we were actually–as the Muslim Brotherhood would say, aren’t these the people that we all were voicing our discontent with? Aren’t these the people who put over 10,000 Egyptians through military court, very unjust military courts that took ten minutes to issue verdicts? Aren’t these the people who, like, beat us up and kicked us out of Tahrir Square many times? Didn’t they thwart the proceedings of justice when we were trying to put some of the old regime figures through–you know, to justice in what we thought would be revolutionary trials but were very, very short, drawn out–I mean, judicial trials? So that memory is too fresh to forget. And while many Egyptians go back to their default of, you know, taking solace in the military institution, a lot of people have–you know, still remember what happened when the military were in power.

And this fear of a coup, again, Sisi, the minister of defense, well, now the commander-in-chief of the army, dealt with it well and never alluding to him taking any power. But what we would hope is that this alliance–I mean, the minister of interior today said that it would stand with the military and what they say. So what’s for sure is that the military are the premier power in the country.

What we would hope is that the alliance of the police and the military does not take us back to the Mubarak era of the iron fist of the security forces, the iron fist of the collective security apparatus that includes the military, that includes the police, that includes the intelligence. That’s a major point that we hope would not reinvent itself, because one thing Morsi didn’t do, as the Supreme Council of the Armed Forces didn’t do when they were in power, is actually do some sort of cleansing to the institutions that allowed Mubarak to be–or that Mubarak used to be such a tyrant. So these are still in place. We would hope that the coming government would have some sort of mandate to purify these institutions. But that’s a big if and a big let’s wait and see, because whoever goes in now will still not have the mandate that a president should have, which is to be the true commander-in-chief of the military and to have the true–to have the minister of interior and the police under his grip.

NOOR: Thank you so much for joining us. And we’ll keep following this story.