President Trump's new effort to undermine Obamacare through "association plans" would increase the healthcare costs of those who need it most, says Michael Lighty of National Nurses United

President Trump's new effort to undermine Obamacare through "association plans" would increase the healthcare costs of those who need it most, says Michael Lighty of National Nurses United 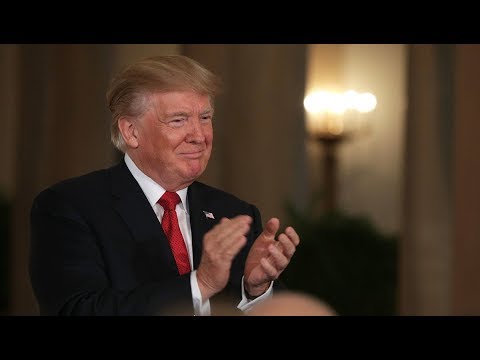 DONALD TRUMP: It directs the Department of Health and Human Services, the Treasury and the Department of Labor to take action to increase competition, increase choice, and increase access to lower priced, high quality health care options, and they will have so many options.

AARON MATÉ: “They will have so many options,” Trump says. The measure signed by Trump today directs agencies to authorize health care plans that undermine the protections and benefits mandated by the Affordable Care Act. Critics say Trump is trying to sabotage a law that Republicans have repeatedly failed to repeal.

Michael Lighty is Director of Public Policy for National Nurses United and a Fellow at the Sanders Institute. Welcome, Michael. I want to start by playing a bit more of sound from Trump’s news conference today before he signed this executive order.

AARON MATÉ: So, that’s Trump today. Michael, the centerpiece of this Trump effort here is to repeal Obamacare rules that basically set certain standards for what kinds of plans health insurers could sell, and it’s modeled on this thing known as association health plans. Can you explain what might be wrong with this picture?

MICHAEL LIGHTY: Well, it’s very problematic in a number of ways. One is is that these so-called association plans are a vehicle where groups of individuals or employers can get together and offer insurance options, insurance plans, but it really has nothing to do with health care. All this negotiation sounds like more of a hassle, since number one, it attracts people who I like to call temporarily healthy, because of course, we never know when an accident can happen or a serious disease may befall us, so it appeals to folks who consider themselves healthy and want a low premium, but they’ll have very high out-of-pocket costs, because you can lower the premiums and have very high deductibles. That’s how it works.

And then secondly, it does allow these plans to avoid some regulations that would otherwise apply, so maybe certain benefits aren’t offered, that again lowers the price of the premium, but leaves you on the hook for costs that would be just borne by the individual. Insurer won’t pick it up, it’s going to come out of your pocket, and then finally, of course, it provides an incentive for employers to ditch their plans now which do have to meet certain standards, and just tell the employees, “Hey, go band together and join an association plan. I’m off the hook.” And so there’s really nothing good about it in those respects, and then of course, those who really want the ACA to function as a viable market for insurance through the exchanges, that will be severely undermined too. Some predictions have the whole insurance marketplace established by the ACA falling apart within a year if this were implemented.

AARON MATÉ: So basically, the impact is that people who need insurance the most, who have the most serious health issues, are being pushed into a little corner in which the plans that they’ll be able to possibly afford aren’t going to be of any use to them.

MICHAEL LIGHTY: Right, because the whole theory of the Affordable Care Act is that everyone has to buy insurance, so any particular insurance plan will have some who don’t need a lot of care and some who do. Once you provide a cheap vehicle for those who are temporarily healthy, they’ll buy that, meaning that those who really need insurance now will face much higher costs because that will be an insurance plan only covering the sick who need a lot of care, potentially, and at least more than those that the cheap plans cover, so that really has another impact, where those who really need health care get priced out of it because the costs go up so much, since the only people in that plan are ones who need a lot of care.

AARON MATÉ: And so for all this talk about respecting free choice and markets, all this has the potential to seriously destabilize these markets.

MICHAEL LIGHTY: Right. There’s no market really that effectively works in health care, because you can’t have the information that you need. You don’t really know what you’re going to need, and so, you have to buy insurance, in this case, based on the possibility you might need quite a bit, but if you buy on the basis that you won’t need anything, then you’re going to destabilize the market, because those people who go into a cheap premium plan will end up potentially with high out-of-pocket costs, and those who need care will be in plans that are no longer affordable, so the whole structure of a tax subsidized, competitive marketplace will be undermined, but the truth is, when President Trump talks about negotiation and choice, he’s not talking about health care. He’s talking about insurance plans, and frankly, that’s really not the problem that people want addressed. What people really need is health care, and they want a guarantee of health care, and this is the opposite of that.

AARON MATÉ: And this approach has been tried before, right? These things known as Multiple Employer Welfare Agreements have a record, and they’re not very successful.

MICHAEL LIGHTY: No, and it’s not clear that the insurers really want it or want to offer those products, because of the track record, where they really couldn’t figure out how to make them a viable product, and it’s also not clear that they want it, that the state insurance commissioners are going to allow it, because if they allow it, then they’re basically undermining their own regulatory authority, since all of these plans are marketed and regulated through the states, so he’s creating a new bureaucracy of multi-state plans where insurance commissioners from different states are going to have to get together with some kind of regulatory approach. It’s all quite quite unknown in that sense, and the track record, as you said, of selling insurance plans or multi-employer plans across state lines was not successful. They simply were not a viable insurance product.

AARON MATÉ: Now meanwhile Trump has done this today, a couple days after he tweeted out that he had called Chuck Schumer about trying to negotiate a deal with him on health care. Do you take that seriously?

MICHAEL LIGHTY: Yeah, no. I’m very skeptical here, and it’s just very hard to believe. When I saw that outreach to Senator Schumer, I tweeted out, “Yeah, why don’t you guys get together and do single payer Medicare for all,” and I honestly believe that President Trump, in the past, has supported single payer Medicare for all. He’s called the Australian system, which has a huge single payer component, better than ours. If he were to actually look at this as a businessman, he would see those advantages, so it just doesn’t add up that he’s reaching out to Schumer at the same time he’s undermining the ACA. If he were serious, get together with the Democrats and do Medicare for all. It’s popular, it works, why not?

AARON MATÉ: Well, so Michael, speaking of which, we recently saw an unprecedented number of Democratic senators join Bernie Sanders in co-sponsoring his Medicare for all bill. In the weeks since, what kind of grassroots, reaction have you see, and momentum that might have resulted from this measure being unveiled?

MICHAEL LIGHTY: Oh, the momentum is incredible. It is really like this grassroots movement is just swelling up and is stronger than ever. We’re going to have a weekend of action out here in California for a state proposal Medicare for all in California. We’re going to be in 80 assembly districts. That’s every assembly district in California. We’ve got 116 events and folks are hugely motivated by the introduction of Senator Sanders bill. You’ve got canvasses going on in different parts of the country. There’s work going on in Texas and Florida to get their senators on board. We just saw a candidate for the U.S. Senate in Texas on the Democratic side going to run against Ted Cruz saying he would vote for Senator Sanders 1804 if he were in the Senate, so it is remarkable the momentum around this, and we’ve seen polls showing a majority of support for Medicare for all among Americans. This really is an issue whose time has come, and I don’t think the momentum can be stopped.

AARON MATÉ: You know, speaking of momentum as we wrap, Michael, these new regulations or this new order signed by Trump today does not immediately take effect, right? It has to be formalized into regulations from different government agencies, so is there a potential that we could see another round of grassroots pressure from activists trying to stop Trump and Republicans from yet again trying to undo the Affordable Care Act?

MICHAEL LIGHTY: I think that’s right. I think it’s also true that we’re pushing back and we’re seeing activists push back on the cuts to Medicaid, maybe as much as a trillion and a half over 10 years, if the Republican budget passes, maybe up to half a trillion dollar cut in Medicare if the Republican budget passes, so this activism isn’t stopping, and you’re absolutely right. This may never happen. This is all show. President Trump is first a showman, and first wants to just get a good headline in this news cycle, but really, when it comes push to shove on whether these plans actually ever happen, I’m dubious, and I think there’ll be a lot of grassroots pressure at the state level to have these insurance commissioners not approve what is essentially junk insurance.

AARON MATÉ: We’ll leave it there. Michael Lighty, Director of Public Policy for National Nurses United and a Fellow at the Sanders Institute. Thank you, Michael.

Michael Lighty is a founding Fellow of the Sanders Institute, and currently serves on the Lancet Commission on Public Policy and Health in the Trump Era. Lighty has advocated, organized and developed policy for healthcare reform nationally and in California for nearly 30 years.