Why are Obama and Romney Bashing China? 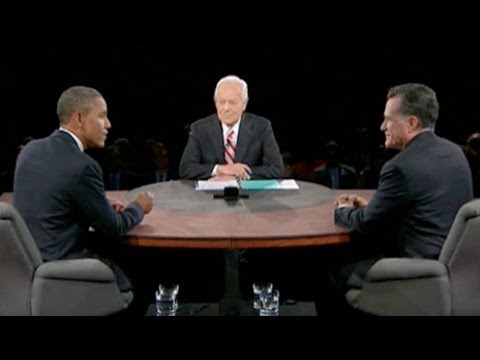 The presidential debate that took place on Monday night with President Obama and candidate Romney, Governor Romney, focused in its final section about U.S.-China relations. Now joining us to give us his take on this portion of the debate is Minqi Li. He’s a associate professor at the University of Utah, specializing in political economy, world systems, and the Chinese economy. He was a political prisoner in China from 1990 to ’92. And he’s the author of the book After Neoliberalism: Empire, Social Democracy, or Socialism?. Thanks for joining us, Minqi.

JAY: So what do you make of this competition to see which candidate is going to get tougher on China?

LI: Well, basically, since the early 2000s we have this kind of division of labor in the global capitalist system. So, while the U.S. is going to specialize in the making of financial profits, the Chinese capitalism is specializing in the exploitation of China’s cheap labor force. Of course, right now this division of labor is running into contradictions because of the breakout of the global financial crisis, and so I don’t think either of the two candidates really have a solution to this, but both of them pretend that they are quite angry about China. But I don’t think they are going to do anything really serious about that.

JAY: So what do you think of Romney’s plan? He says he’s going toâ€”on day one of his presidency he’s going to declare China a currency manipulator and, he said in the other debate, if necessary, put tariffs on Chinese products coming into the United States if they don’t deal with their currency issue. What do you make of that?

LI: Well, Romney might do that or not, depending on whether he is going to be in the presidential office. But I don’t think it is going to seriously affect the U.S.-China economic relationship. Of course, in terms of currency manipulator, we know that the U.S. Federal Reserve has been doing this quantitative easing, first round, second round, and third round. And that might be the greatest currency manipulator in the current global economy.

JAY: Yeah, in terms of trying to lower the value of the U.S. dollar in relationship to other currenciesâ€”

JAY: â€”and, overtly, to promote American exports. And what about President Obama? He’s also talking about going afterâ€”that China doesn’t follow the rules, China has to be on the same playing field. What do you make of that?

LI: Well, the question is, you know, why the U.S. is in a position to decide what should be the global rules. And I do want to mention one thing, that is, four years ago, when Obama is becoming the president, he made a famous announcement this is [incompr.] when the sea level, the global sea level stops rising, and referring to his commitment to climate changeâ€”but now in the current election, since this climate change issue has all disappearedâ€”and, in fact, Obama tries to claim credit for the U.S. shale oil and shale gas boom, which of course in the long run would make this, the global climate situation, even more dangerousâ€”.

JAY: Yeah, there used to be critique of China that it wasn’t paying attention or interested in the climate change issue. And I think, in fact, now, in terms of aternative energy, China’s probably ahead of the United States in terms of what it’s doing on this whole front.

JAY: But underlying all of this is there’s this fundamental problem, I guess, is that they see China as a geopolitical strategic rival. China, becoming this major economic power, surpassing, I think, now Japan in terms of the size of its economy, is a real powerhouse in Asia. On the other hand, the American economy’s completely entwined with the Chinese economy. And all these jobs that have shipped off didn’t magically show up in China; it’s ’cause American companies went to China and set up shop.

LI: Well, one of the underlying issue about this election is thatâ€”or about this debate is that the U.S. has been losing its position of hegemonic power, and as a result the U.S. has got less and less control over the global geopolitics, and most importantly the growing instability in the Middle East area. So in that respect I don’t see that China is going to be a immediate threat to the U.S. position right now. But potentially in the future, if we also have growing contradiction within China, if the Chinese capitalism also become unstable, that could be a tougher challenge for the U.S. capitalism.

JAY: Now, President Obama has done hisâ€”what he’sâ€”he referred to it in that debate Monday night and he’s talked about it before, this pivot towards Asia and this growing alliance with India, which is rather overtly about China on this geopolitical strategic levelâ€”United States is very much looking at some sort of encirclement of China and putting a lot of effort into it. And, in fact, President Obama’s virtually bragging about it.

LI: I don’t think the U.S. is going to enter into a military conflict with China very soon, but from the U.S. point of view it may do no harm to remind China that the U.S. is still controlling China’s oil-supply lifeline.

JAY: But, also, what do you make of the growing alliance and beefing up of India’s, you know, armed forces? They recently bought a nuclear submarine. And this all seems to be, as President Obama said a fewâ€”you know, about a year ago, I guess, when he went to Australia, that, you know, we’reâ€”and he said again in the debate Monday night, China had better not forget we’re a Pacific power.

LI: Well, again, that’s part of the U.S. strategy, to remind the Chinese capitalist class that U.S. has still got the strategic upper hand. But I don’t think the U.S. and China is going to enter into a conflict very soon. But I do think that in the future, if the Chinese capitalism become unstable, that could be a bigger threat to the U.S. capitalism.

LI: Well, I think in this case probably both Obama and Romney to some extent try to pretend to be the defender of the interests of U.S. working class, as well small business. And Obama actually have his chance after 2009, during the 2009 crisis, if he could have, for example, nationalized much of the banking sector and reregulate the U.S. capitalism. But, you know, instead he used the U.S. government money to bail out the corporate business. And so that might be the indication of to what extent they really care about the interests of U.S. working class.

JAY: So you think this anti-China stuff is mostlyâ€”it’s easier to have some rhetoric about China than to, for example, nationalize some banks.

JAY: Alright. Well, thanks very much for joining us, Minqi.

LI: Thank you very much.