Univ. of Maine Faculty Reinstated After Students Protest Against Cuts 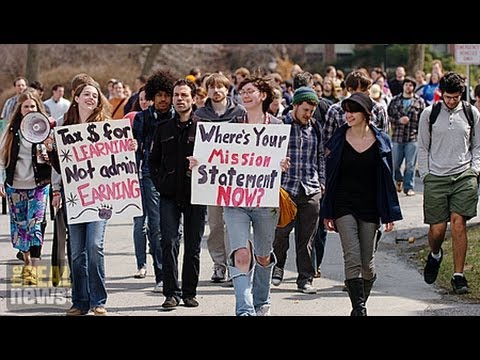 The Real News has been following the student-led movement against cuts at the University of Southern Maine. Now USM president Theodora Kalikow announced that the university will no longer lay off 12 faculty who were fired to help close a $14 million budget shortfall. USM president also acknowledged that her decision was greatly influenced by the student-led protest against the cuts, and said faculty and students should have a greater future role in these types of decisions.

Now joining us to discuss this are our two guests directly involved in the fight against the layoffs at the University of Maine.

We have Meaghan LaSala, who was a student at the University of Southern Maine.

And we’re also joined by Meghan Brodie, who was a faculty member in the Women and Gender Studies Program at the University of Southern Maine. And she is one of the dozen faculty members who were reentrenched on March 21 and now has been temporarily reprieved last week.

DESVARIEUX: So this is like a panel of the Meghans. So I’m going to first start off with Meghan Brodie. What’s your reaction to all of this? On the surface it really seems like a victory. You got your job back, essentially. But what’s your take?

BRODIE: Well, interestingly enough, a student called and told me, because I hadn’t received an email about it, and I was absolutely shocked. I had been hopeful that all of the protests, the letter writing campaigns, the flash mobs would be successful, but I was completely shocked. I was then alarmed to find out that it was a temporary reprieve and that I could be re-retrenched as early as October of this year.

So my future at USM is uncertain, but I’m grateful to have another year, or at least another semester, with my students, and I’m grateful that both my colleagues’ at my students’ voices are being heard at USM, because the institution really is in crisis right now.

DESVARIEUX: Is there any relief for the academic programs that were slated to be cut?

BRODIE: No. So the academic programs slated to be cut, which include American and New England Studies, which is actually a graduate program, the liberal arts and humanities program at the Lewiston-Auburn campus, which is one of the three USM campuses, as well as geosciences, all three of those programs are still slated to be eliminated, are currently undergoing the process required to investigate and make that happen. Faculty, staff, students are still hopeful that that won’t happen. Those programs we identify as incredibly important to our core mission and to the future of the University.

DESVARIEUX: So let’s turn now to the other Meaghan. And I want to get the student perspective on all of this. Essentially, the president acknowledged that the student-led protest was a factor in her decision. What was your reaction to the news, Meaghan?

LASALA: Well, the president was actually kind of unclear on that. President Kalikow said that we may have been an indirect factor, but really did not directly attribute the decision to the pressure that our movement has been creating. And so we think that that’s interesting that–or that that’s telling that she basically acknowledged that the student outcry and the incredible support we’ve gotten from the greater Southern Maine community didn’t have an impact on her decision. We claim this is a victory. I think it is absolutely true that the pressure that we’ve created had an impact on the decision.

But I also think that, you know, we claim this as a victory, but with hesitancy, because like Meghan Brodie pointed out, the reversal of the retrenchments, which are basically a fancy word for layoffs, are not permanent, that they might still be on the table in the future. And it seems strategic that, you know, we’re coming to the end of this semester and one of our major demands has been met, which was the reversal of these retrenchments.

But we want the administration to know that we’re not going anywhere, and we at this point are looking to stand behind staff, that there’s been really incredible cuts to staff within the university, within the University of Southern Maine. And these are–that staff play a vital role in our campus, and that there’s still–I think it’s something like 22 staff have already been laid off, and we’re looking at 35, something close to 35 potential staff layoffs.

DESVARIEUX: But at the end of the day, ladies, the university will still have to find a way to close the $14 million budget gap. So I’m going to ask you both, how do you propose them doing so? And I’ll start off with you, Meghan Brodie.

BRODIE: I think that the Faculty Senate members who drafted a plan and presented it to the president in terms of offering alternatives to faculty cuts identified of a lot of smart key areas in which we can both generate revenue and also ensure future cost savings. If we look at certain administrative positions that potentially are not as necessary or core to our mission as the programs that we teach, if we look to finding ways of expanding our teaching capacity, which is not necessarily the same as having larger classes–I don’t think larger classes are necessarily the solution, nor is that the best situation for students. If you look at how we use the resources that we have, where they go, how they’re distributed, if we look at the facilities on the three campuses, I think that there are a lot of places, if we really dug deep, that we could save money, and save money long-term, that we have to look at making USM a sustainable institution for the future.

I was saddened to learn that the gentleman who takes care of efficiency at USM and has saved us hundreds of thousands of dollars was laid off. I think that his position is a great investment, because not only does it help make us more environmentally friendly, but it saves us money. It saves us money, and to continue to look into savings like that without assuming that we have to sacrifice our core academic mission, and in so doing essentially deprive students of what they have paid, what they’ve paid to get when they come to USM.

DESVARIEUX: Meaghan, what is your take? Because there are going to be–some people are saying, why not raise tuition prices? What do you think is a solution to closing this gap?

LASALA: Do you meet me?

Yeah. You know, I think that the offers that were being presented by the administration are that students need to choose between tuition hikes and budget cuts. And I think that this is, like, a framework that students have been rejecting from day one that I really–I believe that keeping tuition at the rate it is now, if not decreasing it, is a good idea. We want to keep public education accessible for everybody in Southern Maine.

But the way that the administration is going about supposedly trying to cut costs at the University is–just completely does not make sense. And when we look at what’s being targeted, it is completely disproportionately the humanities and the social sciences and the arts that are being targeted, and that it’s in line with what’s been called the corporatization of public higher education throughout the United States, which looks like a ballooning administration with ongoing cuts to faculty. And so the proposed faculty cuts that they’re looking at now would make our faculty-student ratios–it would give us one of the highest faculty-student ratios within the comparable universities that are within our university peers.

DESVARIEUX: Alright. Meaghan LaSala, as well as Meghan Brodie (I feel like the odd woman out without the name Meghan), thank you both for joining us.

BRODIE: Thank you. It was my pleasure.

LASALA: Thanks for having us.

Meghan Brodie is an Assistant Professor of Theatre and a faculty member in the Women and Gender Studies program at the University of Southern Maine. She teaches dramatic literature, theatre history, text analysis, and acting and also works as a director, playwright, and dramaturg. Meghan holds a Ph.D. from Cornell University.

Meaghan LaSala is an organizer with Students for #USMFuture. She is a Women and Gender Studies major at the University of Southern Maine. Meaghan also organizes with students around the state to divest more Maine schools from the fossil fuel industry.