Muhammad Junaid: Floods in Pakistan will devastate food supply in both countries

Muhammad Junaid: Floods in Pakistan will devastate food supply in both countries 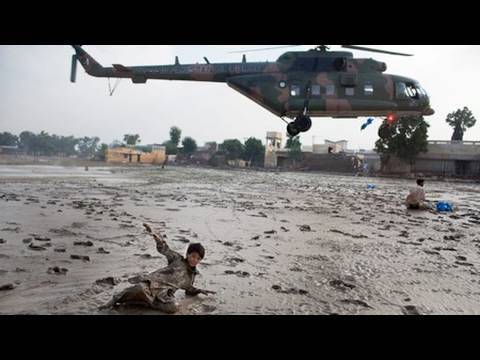 PAUL JAY, SENIOR EDITOR, TRNN: Welcome to The Real News Network. I’m Paul Jay in Washington. And in Pakistan, more than 4 million people have been left homeless by tremendous flooding, the worst flooding in a century. Sixteen hundred people at least have been killed. Perhaps 15 million people have been displaced. Affected particularly: Pakistan’s Swat Valley, which was the place the battle between Pakistan troops and the Taliban took place a few months ago. More than 550,000 hectares of farmland are underwater, 250,000 homes damaged or destroyed. A hundred thousand people, apparently, have been rescued by Pakistan’s military from flooded areas. But reports are—people are saying that the military’s not doing enough and the government’s doing even less. Now joining us from Essex, England, is Muhammad Junaid. He’s a scholar studying Pashtun nation. He originates from Peshawar in Pakistan. Thanks for joining us, Junaid.

JAY: So tell us what you hear. What’s going on with the flooding? And, particularly, what are the implications going forward in Pakistan?

JUNAID: Well, it is an unprecedented amount of water coming down from Swat Valley. Let me tell you what happened first. In Swat Valley there has been seven cloudbursts simultaneously on 28 July. So—which—the outburst was millions of gallons of water. And the flood was taken specifically through the Swat River. The major bridges—18 major bridges in Swat have been destroyed. In 1929, the British established a barrage. Barrage is something which is used to distribute agricultural water into smaller canals in Pakistan. At the tip of Swat, Munda Barrage, which actually distributes water from Swat, coming from Swat into the Khyber Pakhtunkhwa.

JAY: This is like a drainage canal of some kind?

JUNAID: Yes. It is a distribution system. It’s a big wall which actually distributes the big river into smaller canals. Now, this canal was actually designed for taking a maximum load of 50,000 cusecs. Cusecs is cubic centimeter of water going per second. However, it encountered a water load of 300,000 cusecs, which never happened in the last 100 years. So that barrage is normal. That distribution system was transferred to smithereens. And the water came down, and all the fertile lands, which were naturally on the riverbanks, came under severe floods. My own home is in Nowshera, and Nowshera is a district which is very fertile. It’s about 500 meters away from the river. And you can imagine that it was under 30 feet of water. It was 30 feet of water, and I couldn’t see my house from the video that I have received from Pakistan. So this is the level of severity. However, the problem is this flood has gone downwards towards the Arabian Sea, and it has taken the most fertile lands of Punjab, it has taken out the fertile lands of Sindh, and it has destroyed all the staple crops; a lot of sugarcane crop. And the main problem is that people, poor people [inaudible] people are supported by agricultural produce. They are farmers, normally, and they don’t have anything now to live off. That is the most immediate problem that has faced Pakistan.

JAY: So there’s going to be tremendous potential starvation.

JUNAID: Yes. It is a big fear that there will be, you know, a famine in the next six months to one year. Especially, those poor people are unable to sustain themselves. However, the short-term problem will hopefully be looked after by the international community and the Pakistani community. However, the long-term problems are very serious, because more than 4 million people have lost their homes. And building a house is not easy. It needs money; it needs a lot of resources. And that will need a big investment, and nobody knows where it will come from.

JAY: So what do you think are the potential implications, first of all, on the military side?

JUNAID: Well, the military side, you know, it has shown its implications, actually. On the second or third day of the flood, the commandant of Frontier Constabulary, Mr. Safwat Ghayur, who was a 29-year-old veteran for Peshawar police and one of the star cop of NWFP—of Khyber Pakhtunkhwa now—has been assassinated by a suicide bomber. And the responsibility was taken by the local Taliban, that they have, you know, assassinated that man. He was a real star performer. I mean, we as children, you know, remember his stories. So they’ve, you know, started their activities. Local Taliban are also—there are news that local Taliban are also recruiting, you know, people and telling them that the wrath of God has taken them, because, you know, they oppose Taliban, and, you know, they should now come back to Taliban so that, you know, they can defeat wrath of God. This type of propaganda is you know, being ushered by Taliban.

JAY: So is this likely, then, do you think, to strengthen the Taliban? It’s going to tie up the army. And let me ask another question. Is there any suggestion that Pakistan will move some of the troops from Kashmir up into this area?

JUNAID: Well, to look at it, you know, from this perspective, because there is—you know, everything is absolutely devastated. There is nothing left. There will be some comeback done by Taliban. However, Swat Valley is totally in control. As a matter of fact, the Pakistan army said that they have advantage in dealing with the situation in Swat, because they’re already placed in the disaster room. So they, you know, took care of it very well. There will be some repercussion of it negatively. However, I don’t think, you know, the people will come in this propaganda, because the local Taliban have really, you know, put a bad name to their own faith, and I don’t think, you know, they can be supported now within Pakistan.

JAY: Or do you think this will actually lead to less popular support for the Taliban, not more?

JAY: So for the sake of the relief efforts, they’re going to have to pull back some of the fighting.

JUNAID: Yes, they have to do that, and they are doing that. But in all opinion, you know, the relief work is—there are a lot of, you know, volunteers in that area, and they’re taking care of the thing. Those people have to, you know, take care of themselves, because this is, you know, how the Pakistani government acts. I mean, our president has been, you know, going around in Europe, you know, while there has been floods. So Pakistani nation is almost always, you know, left to look after themselves.

JAY: Yeah. We’ve seen reports of many areas where the government hasn’t even—representative hasn’t shown up yet, including army representatives. But let me ask you this question: what effect do you think this might have on the fighting in Afghanistan?

JUNAID: Well, it will have, you know, some amount of effect, because many—Afghanistan is, you know, normally fed by, you know, the Pakistani lands. Many things, you know, go to Afghanistan. You know. There has been—many, many people have lost their cattle. And the famine situation will have repercussions on Afghanistan. There won’t be—there will be some food shortages.

JAY: So if you get what you’re saying might happen, a terrible famine in Pakistan, and you start to then get reflections of that in Afghanistan, how does that affect the situation in Afghanistan? Do you know what the actual amount of the food supply of Afghanistan depends on Pakistan?

JAY: Well, the obvious place where food could come from would be India.

JAY: Yeah, that’s another basis for hoarding and speculation.

JUNAID: Exactly. It is. It will raise the prices as well.

JAY: Thanks very much for joining us, Junaid.