Kandahar campaign will be bloody 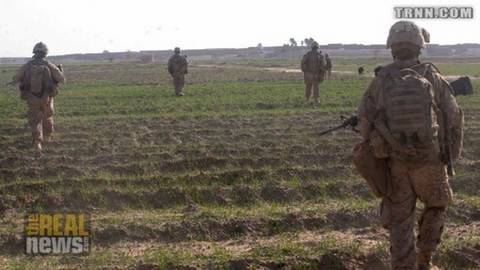 PAUL JAY, SENIOR EDITOR, TRNN: Welcome back to The Real News Network. I’m Paul Jay in Washington. And joining us again from Essex, England, is Muhammad Junaid. He’s a research scholar working in England, studying the Pashtun nation. Thanks for joining us again, Muhammad.

JAY: So we’ve been talking about the upcoming—what we’re told—American-NATO campaign in Kandahar area against the Taliban. What are supposed to be the objectives of this campaign? And what does it look like on the ground?

JUNAID: Let’s, you know, compare this kind of campaign, you know, to something that happened in Pakistan for the last six, seven years in the the tribal areas in Waziristan, because that is going to be replicated, in my opinion. As I said, the culture of that area is the first and the foremost enemy, and the people there have a certain way of living, where they do not want people to invade them and, you know, impose their systems. So somehow they are providing for those fighters and are able to sustain through a decade right now. Let’s move a bit deeper into this. In Kandahar there is a system of governance which is very cultural in its nature. For example, the jirga system and the Islamic law, there Qazi sits and, you know, he decides about things. Essentially, the target of NATO and America is to remove that system or to destabilize it. A similar system was in place in Waziristan, Pakistan, where the local maliks, who were the chieftains of smaller tribes, would be convened for any conflict and they would resolve it.

JUNAID: So the maliks there would be able to provide a guaranteed peace, or whatever was required, in a jirga. The target is now to do something in Kandahar where that system becomes unstable. Once you create instability in a place, it is easy to form your own militias and make them side with you and create instability. That instability in long run is going to be detrimental for Taliban, because they will not be able to sustain off Kandahar, and there will be no sustainable system in Kandahar. A similar thing happened in Marja, actually, that the Marja village is not sustainable in itself. It cannot sustain people. So it seems, you know, something like that is going to be in Kandahar. But it seems like it would be very bloody.

JAY: Now, in Waziristan the Pakistani government was able more or less to get most of the civilians to leave town and go into these enormous refugee camps, and then the war took place and did enormous destruction to the villages, the property. But most of the people left and then later went back. That does not seem to be the case in Kandahar or the Kandahar area. They’re not trying to get everybody to leave.

JUNAID: The reason in Kandahar is that, you know, it is a more complex matter, because Karzai is also, you know, coming from Kandahar. He belongs to Kandahar, and, you know, he has his side and his base as well there. And so he cannot afford to just let it be destroyed like Waziristan. It is more complex. However, there will be people who have to move off. There are no-go areas in Kandahar, and there will be some destruction in those places. People will be made refugees, and they will go around. Probably they will cross into Balochistan, or maybe, you know, they will have to migrate into some camps. But Kandahar cannot be destroyed like Waziristan, because it is the native city of Karzai as well.

JAY: Now, we’ve heard numbers like NATO American troops 23,000 or more against what we’ve heard 1,000 Taliban fighters. Like, they may be fighting them 23 to 1. Does this sound like what’s happening?

JUNAID: Yes, it has to be like this, the guerrilla war has to be that, because the NATO and American armies going in have modern equipment and high-tech gear. And if thousands of Taliban come in front of them, they will die in hundreds. Now, so it is the basic guerrilla tactic to keep your number to a minimum and create as much damage as possible, and it will be at least 23 to 1.

JAY: Now, where is the fighting actually likely to take place? Is it in Kandahar? Or are we talking more about the villages around Kandahar?

JUNAID: The NATO and Americans will, you know, face resistance, and that will, you know, create a kind of an urban warfare situation and guerrilla warfare. That was seen in Iraq, to some extent. However, the problem is in Iraq you do not find a terrain where these guerrillas can go and hide for a longer period of time. In Afghanistan they have this luxury. So if they want to go out, they will go out and, you know, they will try to wait out the Americans and NATO, or, you know, the Americans and NATO have to go after them and hunt them.

JAY: The reports that we’re hearing is that the people in the area, in Kandahar and the villages around, what they want is some kind of peace negotiations. They don’t want more war. They’re opposed to this campaign. Is that what you’re hearing?

JUNAID: Yes, exactly. There is no doubt. It will be a natural reaction of any population to negotiate things peacefully. Look, everybody knows, you know, America and NATO has to move from this place; 1 year, 2 years, 5 years, 10 years, 12 years, at last, they have to go out. So there has to be some kind of peace. If they keep fighting each other, Taliban will go away for some time, but they will come back then, and 90 percent of the losses will be taken by the local population, which obviously they don’t want.

JAY: Thanks for joining us, Muhammad.