Junaid: People of Kandahar caught between US army and Taliban; will not support US offensive

Junaid: People of Kandahar caught between US army and Taliban; will not support US offensive 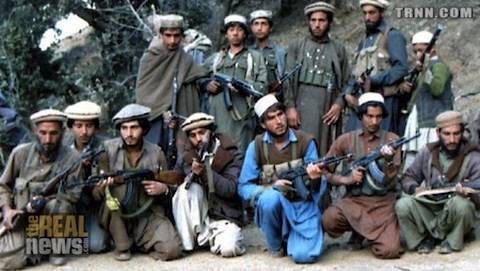 PAUL JAY, SENIOR EDITOR, TRNN: Welcome to The Real News Network. I’m Paul Jay in Washington. In Afghanistan, as NATO and American troops prepare for their major campaign of the spring or summer around Kandahar, President Karzai held a peace loya jirga with elders from the region. To help us understand what happened at that conference and what’s happening in the preparation for this coming surge in warfare is Muhammad Junaid. He joins us from Essex, England. He’s a research scholar studying the Pashtun nation. Thanks for joining us again, Muhammad.

MUHAMMAD JUNAID: Thank you very much.

JAY: So before we get into what’s happening in terms of the preparation for—I guess the "battle of Kandahar" it’s going to wind up being called, what do you make of this peace loya jirga that Karzai just held?

JUNAID: Before going to that, it is important to make a few points about what is actually happening there and what is actually America and NATO fighting against. That is the most important aspect, because once we get to know what is that place made up of, we will be able to see what tactics can come out. There is a culture and there is, you know, a society, Pashtun society and culture, which resents foreign fighters. So it is also the culture which NATO and America is fighting against. You can see the examples of those cultures, you know, in many movies that are out, you know, in the last hundred years, of different freedom-fighting, you know, nations. There are many. Another thing is, you know, the terrain is such that it is very hard to fight in, and it suits guerrilla war. So these are, you know, the main targets of NATO and America. Now, jirga is one of the dominant cultural tenets, which is called pashtunwali. It is one of the main forum where elders come together, join their heads, and they’ll decide upon how to solve the problems. It has a veto power in the end, and it can decide anything. However, this jirga had a very restricted scope. And once we add this one sentence to it, that it was restricted in its nature. It is actually not a jirga. It is something else.

JAY: Now, let’s just be clear. We’re talking about the jirga Karzai’s organizing. And you’re saying it’s restricted because of what?

JUNAID: It is restricted because it cannot come together and decide when the foreign forces are going out. It cannot decide what kind of system is going to be implemented in Afghanistan. Will it be a pure democracy? Or will it be an Iranian style democracy? Which law is going to govern this land? Is it going to be an Islamic law, which is in Afghanistan for the last century or something? Or is it going to be some kind of a Western democratic system, you know, where the law is interpreted by British system or whatever?

JAY: But the point is it had no real decision-making power. It’s also been—people have been saying it’s very hand-picked by Karzai, so it doesn’t really represent the broad spectrum of the politics.

JUNAID: Yes, because it is a media gesture, and America and NATO does not want the media to listen to their views, which can really reflect negatively on the jirga. So those people have to be invited who know what to speak and what not to speak. They have to refrain from exercising their real powers of jirga, and they have to speak a certain script or within certain scripts.

JAY: But how representative are the elders that are there? I mean, do they in fact represent most of the elders of the region or not?

JUNAID: I would say it does represent to some extent. However, almost every area is allowed to appoint a sole elder. You cannot call it an effective jirga. However, on the other hand, there are some areas which are friendly with NATO and America which are in peace, so the elders of those areas will surely come and they will be representatives in that jirga. So it is a partially representative jirga.

JAY: Stephen Grey made a report for Channel 4 talking about how the Americans are hiring militias in some of the villages around Kandahar, and some of these militias, instead of fighting the Taliban, are kind of throwing their weight around villages. They’re also trying to get the villagers themselves to create their own defense committees. And in one of the scenes of his report, the villagers are saying, we don’t want to fight, because you’re going to leave someday and then we’re going to be left at war with the Taliban. What’s the mood of the people about all of this?

JUNAID: The militias are a reality. And this is how America dealt with the war in Iraq, that they, you know, created local militias. However, the militias in these villages now in Afghanistan will be much smaller than the Taliban’s forces, and they will be just looking for their own benefits. And I cannot imagine how they will fight Taliban once Taliban want to fight them and, you know, take on a village. Actually, it is a tactical move rather than a strategic move. It is tactical in the sense that the Taliban have to be cut from their supplies and their resting places, and those places are actually the small hamlets and villages around Kandahar and in the mountains. So if you want to cut them off, you cannot actually guard them through Afghan National Army, NATO, or these forces. But the best way is to arm those villages and tell them not to let Taliban [sic], and then supply something to the village, give them some grain or something, and hope for the best that they will not share the grains with Taliban.

JAY: So in this coming campaign, what side is the local population going to be on?

JUNAID: Well, I cannot imagine, you know, that there will be anyone siding with NATO or US forces. But on a tactical level as well sometimes when they want their own benefits. They will take their benefits and they will, you know, side momentarily with the Americans and with the NATO. But eventually, you know, Taliban is a reality which will be there and which is there at night. So the people of Kandahar and villages do live there in day or in night, and they have to deal with it, so they cannot openly, you know, and truly come to NATO’s and America’s side. The problem is this area for the last 30, 40 years is in great war, and these people are looking for some sort of stability. This stability cannot be guaranteed by Afghan National Army or NATO or America. They know this. This cannot be guaranteed by them. However, Taliban guaranteed it for a certain time, for a few years. And the people there, certainly there, between Scylla and Charybdis, is they don’t know where to go. They have to be siding with one force at night and with another in the morning, I think.