The "Battle" of Marja

Muhammad Junaid: Marja more propaganda than war, but if US brings prosperity, people could accept it

Muhammad Junaid: Marja more propaganda than war, but if US brings prosperity, people could accept it 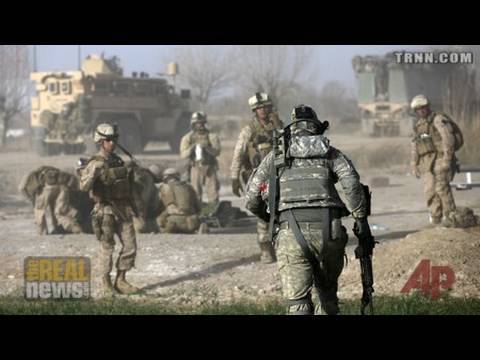 PAUL JAY, SENIOR EDITOR, TRNN: Welcome to The Real News Network. I’m Paul Jay, coming to you from Washington. Now joining us from London is Muhammad Junaid. He’s a PhD student, researcher. He comes from Peshawar, in Pakistan, which is the city near the Pakistan-Afghan border. Thanks for joining us, Muhammad.

JAY: So tell us what you hear from your own research and people you’ve been talking to in Pakistan, Afghanistan. What’s going on at the American-NATO offensive in Marja?

JUNAID: Well, it has been a week that, you know, something has started in Marja, in Helmand, which is very close to Kandahar. The NATO forces are going there in numbers, and they’re drumming it up as a big battle of this war. Some points are encouraging. There are good things happening, because they are saying that will build it positively. Some of the points look like a lot of media hype, which has been created to drum up support in the Western countries, surely. For example, there is not supposed to be any battle there, because it is a guerrilla war. This is mountainous area. And there will be a guerrilla war, and in guerrilla war, it has to be hand-to-hand combat. So expecting a big battle in this place is a bit of a media thing.

JAY: Well, it had seemed like the Americans not only knew that but perhaps wanted it. They made it clear—they announced weeks ahead of time that they were going to do this. So it sounds like they actually were hoping a lot of Taliban would leave the town. The question, I guess, comes down to this. I think everyone’s assuming that sooner or later they will control the town. And then what? So there are two parts to the then-what: How many civilians got killed in the course of that? And then, number two, what does "holding" really mean? So start with the first part. Apparently, five more civilians were killed today; 12 were killed, I believe, yesterday. To what extent do you think the people of Marja will accept any civilian deaths? And what do you think the people of the town actually want?

JUNAID: Well, see, well, you know, go back to the Pashtun customs, you know, which is really guideline for us, and how do they take the deaths there. If a death is an offensive one and, you know, there is no back of that, there is no apology tendered, and there is no reconciliation through the jirga system, then it is surely taken as a very negative thing, and it can bite back really, really badly for the NATO forces. However, they will be expecting some civilian deaths, which is natural. I think it all comes down to how do they build this area, what do they do with the civilians. Now, it is very clear that the Karzai government and the mainly Tajik and Uzbek Afghan National Army is not really welcomed in these areas. I am sure that the American and British forces will be welcomed, at least partially. There is no doubting that. The people of this area, poor people, are suffering for the last four decades. They don’t wish to fight each and every person coming there. And if they have good things to give to this place, they will surely welcome it. But as soon as these forces leave and, you know, it comes down to Afghan National Army, Afghan police, then you know the troubles will start. So the last part, holding, is, you know, something.

JAY: Okay. But before we get there, the way the media’s playing this in the West is that the population of Marja are more or less—I mean, it’s practically like as if they’re neutral in this. To what extent is there popular support for the Taliban? Is there a popular support for anti-foreign occupation? What do you make of that?

JAY: To accept or not to accept?

JUNAID: To accept. They will accept it. But, I mean, you know, there are two things. One is, you know, they are poor people, so they will, you know, want the development.

JAY: Hold on, hold on. Let me just back up, because I just want to be really clear on this. You’re saying if they do develop some level of prosperity there, people can accept the NATO-American forces and what the plan is for this area. Well, let me ask a question in regards to that, then. If I understand it correctly, this is one of the main areas of poppy-growing and heroin and other types of production of narcotics. If there’s going to be reconstruction there and prosperity, what should be the attitude towards the question of poppy? Because right now it’s all about the poppy.

JUNAID: Look, the poppy cultivation, again, is—you know, it’s a on-off story in the last five, six decades. If you look at the history of this place, whenever there was good support from the government—there was once support from the American government in 1960s, when it was even called "Small America"—you can find this on the Internet, even. When that started up, I mean, people, you know, left cultivating poppy. If you go to the poppy question, remember one simple thing: the poppy is controlled by the warlords and the strong people there. The poorer people, the 90 to 95 percent poor people, do not have all the riches coming from the poppy.

JAY: And just to be clear, many of these warlords are all around the Karzai government. It’s not just the Taliban.

JAY: Now, one of the issues is that the Americans are saying sooner than later they’re going to turn this over to an Afghan government, to the Afghan armed forces. Most of these armed forces are Uzbeks and Tajiks; they’re not Pashtuns. Are they going to accept an Afghan army that’s mostly Northerners?

JUNAID: And that is going to be, you know, problematic. There is, you know, the ethnic divide, which—the ethnic divide is huge. It is, you know, 2,000 years old. So even if the Uzbeks and Tajiks are very good to these people, even then it is very hard. But it is very, you know, hard to imagine that Uzbeks and Tajiks will, you know, treat these people very well. It is almost impossible to imagine that. They are corrupt. I mean, it’s a poor country. You know, you look at any African country, you know, the poor African country, and this happens there as well. So it is hard to imagine what will happen then.

JAY: So what do you think is going to—in the next few days, what should we be looking for to see whether this campaign seems to be successful from an American point of view?

JUNAID: From an American point of view, I think, you know, they need not to chase Taliban too much. They’d need to, you know, concentrate more and more on, you know, developing the area and making, you know, people feel that what America was, you know, it is coming here, it is going to be Small America again. And if they give that feeling to the people, you would see very positive results.

JAY: And what are two or three concrete things they should be doing there in terms of development?

JAY: I guess we’ll see. I mean, that’s been the same story right from the beginning, in 2001, that if there’d been reconstruction, none of this would have been happening. So I guess we’ll see if any lessons have been learned. Thanks very much for joining us, Muhammad.