Do the Taliban represent the Pashtuns? Pt.4

Junaid: Afghan jirga is a real democratic form, if left alone, they would tell foreign forces to leave

Junaid: Afghan jirga is a real democratic form, if left alone, they would tell foreign forces to leave

Do the Taliban represent the Pashtuns? 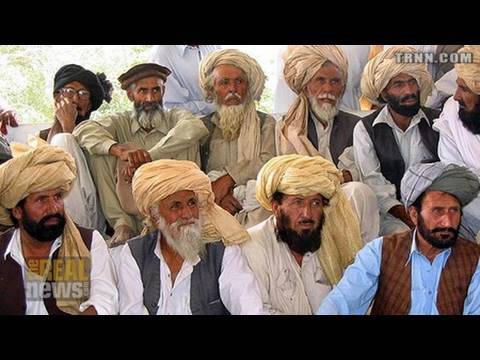 PAUL JAY, SENIOR EDITOR, TRNN: I’m Paul Jay in Washington, DC, and joining us again from London is Muhammad Junaid. He’s a researcher and PhD student studying the Pashtun identity. Thanks for joining us again, Muhammad.

MUHAMMAD JUNAID: Thank you very much.

JAY: So let’s conclude with one question. Are the Pashtun nation, broadly speaking, decided now that this is a foreign occupation, the American-NATO occupation, that Pashtuns as a whole will fight? Or is it not yet at that point?

JUNAID: Well, it’s a bit of a prophecy, but, you know, let’s look at it from a historical perspective. Pashtuns would simply think it is an invasion, but additionally they did think that these people are going to go away—no doubt in that the American-NATO are going to go away one day. Now, if you add these two elements, it gives a lot of strength to Pashtuns to keep inside their homeland and regulate their own tribal societies, their own smaller tribes, subtribes. So going weapons hot against America and NATO by all the Pashtuns, it won’t happen. It didn’t happen, actually, in the communists’ time, if you look at it. They lived in their villages, they lived in their cities, and they protected their own parameters, they protected their own culture. But the communists, you know, the Russians gave them a lot of money and a lot of goods, and they were really happy with that. The Pashtuns will take that. But they will simply think these people are going to go away, but they are going to give us some benefits while they are here. So this is more typical Pashtun psychology. They will hate America, but because it is not one nation, it’s not one whole body which can rise like that, so they can, you know, act very organically like that. If the American incursions, you know, go too high in the coming 6 months, then there is a chance. If they, you know, start desecrating the holy Koran, which happened, you know, a few days ago, you know, they start, you know, killing schoolchildren, which happened a week ago, that can create a huge problem, because then, you know, all Pashtuns will come together and they will, you know, forget about their own or protecting their own parameters. But as long as, you know, they keep giving benefit to the tribes so that they can live their own culture for some period of time, they will not go weapons hot, not all of them. On the other hand, Taliban will keep fighting. It’s more like two wings, fighting, thinking of the same thing: these are our enemies. One wing thinks we have to fight them, the other wing is thinking let’s leave it at protecting your own culture.

JUNAID: The jirga system is, you know, again, one of the most important tenets of Pashtunwali, or one of the most important part of Pashtun culture. It is actually a jury of elders, and it is from grassroots. It starts from the region. It goes higher and higher. It comes to loya jirga. Loya jirga means all the heads of permanent tribes and subtribes come together to talk about something. Now, loya jirga is a system which is one of the best example of tribal democracy, because everybody is supposed to speak about their own area and their own people, and they will negotiate the terms according to their own benefits. So it is very, very democratic. Now, the problem is all the neighbors of Afghanistan and the NATO and America are entrusted to have their own benefits. So they manipulate loya jirga. I think, you know, all the countries take part in manipulating the loya jirga. As soon as there is a small hint of manipulating the jirga, the whole independence of jirga is gone. It is no more trusted after that. So that’s, you know, the whole problem. You cannot, you know, tell jirga people or force them or, you know, pressurize them to do things or say things. If you do that, the whole truthfulness is gone, the whole democracy of it is gone, and the Pashtuns will not, you know, go with it.

JAY: And what is the status now? Is there a kind of national jirga that people, the Pashtuns, respect? And what’s its relationship to the Afghan Parliament?

JUNAID: Well, Afghan Parliament is also—you know, I think, you know, the jirga thing is coming into it. If you look at it, you know, Hamid Karzai, you know, proposed a cabinet, and, you know, it rejected it. So the jirga thing is coming into it, in my opinion is one of the purer form of democracies in the whole world, at this point, as I said, you know, most of the countries are trying to have their own, you know, voices in the jirga, and that will never work. They have to leave jirga to its own decisions, where those leaders really represent the tribes and they really talk about their benefits of their own tribes and subtribes. And once that happens you will see, you know, a very different color to Afghanistan. But the problem is, you know, the results are never assured. You never know. It’s not a two-party system. It’s not even a three-party system. A jirga is a jury. Everybody will want their own benefits, and everybody will speak according to, you know, their honest opinion, because they have to answer back to their small tribes and subtribes. In my opinion, forget warlordism, it’s not a jirga, which all the Pashtuns will agree on.

JUNAID: No, I don’t think, because, you know, the same thing is happening: it is being manipulated in many ways. And if they leave the jirga to their own statements, well, this is one of the biggest demand that may come or that will come from the jirga, to please leave.

JAY: Thanks very much for joining us Muhammad.