The New Left in China

With a dramatic change in Chinese intellectual life since the 1980s, Chinese political economist Minqi Li states that the many Chinese intellectuals are now critical of market-oriented reform and neo-liberalism because of negative social consequences.

With a dramatic change in Chinese intellectual life since the 1980s, Chinese political economist Minqi Li states that the many Chinese intellectuals are now critical of market-oriented reform and neo-liberalism because of negative social consequences. 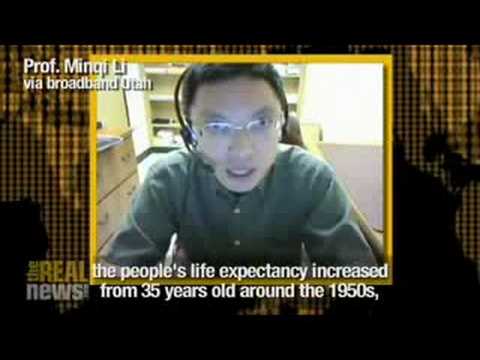 ZAA NKWETA (VOICEOVER): Beijing Olympics mark China’s debut onto the international stage, illustrating the dramatic change that China has undergone since the 1980s. In a series of interviews, The Real News senior editor Paul Jay spoke to professor, former political prisoner, and political economist Minqi Li about the current situation in China.

PAUL JAY, SENIOR EDITOR: Welcome back to the next segment in our interviews with Minqi Li about the current situation in China. Welcome, Minqi.

JAY: The view we get, from the West, of China, we see to some extent the figures of the leaders of the Chinese Communist Party, we know a little bit in history, something called the democracy movement, but we know very little about it in terms of what the different trends are, and we don’t really hear about much else other than Chinese consumerism. But we know there’s a tremendously vigorous intellectual life in China. So can you talk about the intellectual and political trends as they exist today?

JAY: The ideas of open markets, independent capitalist enterprises, breaking down the sort of state-owned economy.

LI: That was also the case for, basically, virtually all of the leaders of the 1989 democratic movement. But things started to change by the mid-1990s.

JAY: Just to be clear, so you’re saying most of the leadership of the Tienanmen Square democracy type of movement were mostly connected to this neoliberal economic reform movement.

LI: Yeah. I would say probably all of them. And by the mid-1990s things started to change. You started to have some intellectuals who criticized the market-oriented reform, the neoliberal ideas, and so that by the late 1990s, early 2000s, you could say that a new trend that was referred to as the New Left emerged in China. In today’s Chinese context, this term New Left is used to refer to a very broad category that ranged from everyone from social democrat, nationalist, left nationalist, to Marxist. What they have in common is that they all are to different degrees critical of market-oriented reform, to a different degree critical of neoliberalism, and to a different degree have a generally positive view of the Maoist period, with different emphases.

JAY: They have a more positive view towards the Maoist period.

JAY: So you’re talking about things like there used to be more of a health care system for people than there is now and examples like that.

LI: In the Maoist period, for example, the people’s life expectancy increased from 35 years old around 1950s, and towards the end of Maoist period that’s increased to close to 70 years old. And so that’s a very dramatic change, probably the biggest increase in terms of life expectancy compared to other countries over the same length of period. And they also have developed some re-evaluation of the Cultural Revolution. So instead of the Chinese official point of view is that the Cultural Revolution has to be totally denied, it’s ten years of [inaudible] ten years of disaster, and they tend to emphasize that there have been many positive economic and social accomplishments.

JAY: For example? What are some of those positive examples? Because the picture that’s painted in the West of the Cultural Revolution is a sort of tyrannical, crazed period. That’s the way it’s painted for us.

LI: They actually cited the Chinese official statistics, population in the reform years. And so they used those statistically to argue that, in fact, China’s pace of industrialization had to be very rapid in the Cultural Revolution years. And, also, China had accomplished many technical achievements, including such as the hybridized rice. And China was not far behind the US at that time in term of computer development. And they also talk about the initial intention of Mao to start a Cultural Revolution had to do with trying to reverse the trends towards the emerging of a new, privileged bureaucratic caste, which would later lead to the development of capitalism. And they believe that has been, in fact, verified.

JAY: This trend that thinks the way you’re describing, this must be quite a small, in terms of population, a small segment of opinion. Is that true?

LI: It’s actually not true. Even among the intellectuals these days, and as well as among the politically conscious young students, I would say, you know, anywhere between one-quarter to one-third probably hold this kind of point of view. In terms of general population, not a small number of them have a quite favorable view about the Maoist period, especially, you know, for the workers, because of the negative social consequences of the market development.

JAY: What you’re calling the New Left critique of the current period, to what extent does that exist inside the party? Or is this mostly something that’s happening outside the Chinese Communist Party?

LI: Well, pretty much outside the Party. The Party itself, in terms of its view of the Cultural Revolution, its view of the Maoist period, it’s actually very close to the mainstream Western view, as well as what in China now is called a liberal approach, as opposed to a New Left.