If the Senate confirms longtime climate denier Mike Pompeo as secretary of state, it would put a Koch Brothers proxy in one of the most powerful positions in the U.S. government. Pompeo's "history of business subservience" doesn't bode well for climate policy, says Greenpeace researcher Connor Gibson

If the Senate confirms longtime climate denier Mike Pompeo as secretary of state, it would put a Koch Brothers proxy in one of the most powerful positions in the U.S. government. Pompeo's "history of business subservience" doesn't bode well for climate policy, says Greenpeace researcher Connor Gibson 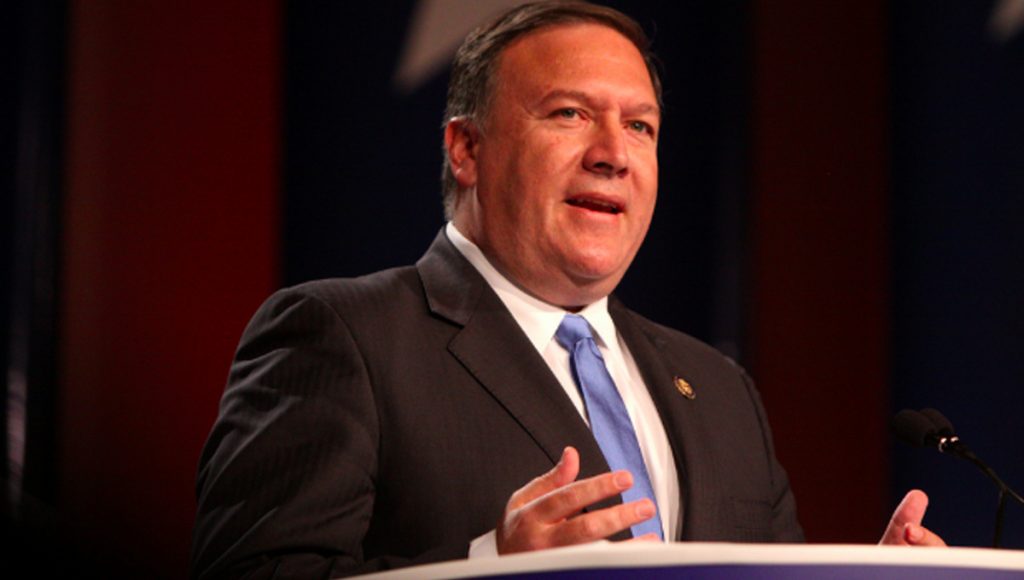 In the biggest shakeup in Trump’s cabinet was the firing of Secretary of State Rex Tillerson and replacing him with the current CIA director Mike Pompeo. Pompeo, a longtime climate denier, in his confirmation hearing last year for his job as director of the CIA, to he idea of climate change as national security threat he said that was ignorant, dangerous, and absolutely unbelievable. Now, many environmentalists are concerned that he will be a complete disaster for international climate and environmental policy not only for his climate denialism but because he has received substantial campaign financing from the oil billionaire brothers Charles and David Koch, with whom he has a long history of political involvement, including receiving seed money to start up his own airplane business in Kansas.

But could anyone be worse for climate policy than Rex Tillerson himself, the former CEO of Exxon Mobil, the largest oil company in the world? Now with us to help analyze this issue we’re joined by Connor Gibson, who is a researcher for Greenpeace and its investigation team. And he joins us today from Oakland, California. Connor, thank you so much for joining us.

SHARMINI PERIES: So Connor, in Mike Pompeo we have Donald Trump basically picking someone who is worse for the environment and environmental policy than Rex Tillerson himself. Now that is quite remarkable decision to have made at a time when we are facing such a climate crisis, and the U.S. has decided to pull out of the Paris Climate Agreement, for which the State Department has responsibility. What are your thoughts on this?

CONNOR GIBSON: Well from Greenpeace’s position it’s kind of hard to measure, you know, Rex Tillerson versus Mike Pompeo. We weren’t particularly happy about the former Exxon Mobil CEO running our State Department. But I’m more concerned about the fact that the Koch brothers, Charles and David Koch from Kansas, are increasingly having more and more influence over the White House and government agencies. Trump has had a lack of expertise and people willing to serve in the administration, and the Koch network has all sorts of people like Mike Pompeo that are ready to take these posts.

But of concern to me, you know, Mike Pompeo was not somebody who has a background in international diplomacy or even public service before his congressional career. He has more of a history of business subservience. There was no donor larger to his campaign than Charles Koch. He came into Congress on the back, as you said, from doing business with the Koch brothers. And now he’s spent a stint in the CIA where we largely don’t know what he did on behalf of not only the country but of the Kochs.

So to have him move over to the secretary of state position, that is something I see as more Donald Trump wanting more control over the person who is doing diplomacy with other countries.

SHARMINI PERIES: Upon being considered or nominated for sectary of state, in a brief press interaction in that room where President Trump meets with the cabinet, he stated that in terms of his appointment, he said, in the good tradition of the CIA I’ll refrain from saying anything significant in front of the media.

Now, this of course points to his lack of transparency in terms of what us as the public are entitled to in terms of government policy making, and particularly when it concerns environment, and hazardous policy decisions this government has already made. Now, before this we know that Mike Pompeo of course was a congressman representing Kansas from 2011 to 2017. Talk about what kind of congressman he was and the talk we are hearing in terms of his membership in the Tea Party, and how his connections to the Koch brothers may actually influence his decisions in the State Department.

CONNOR GIBSON: Sure. So if you’ll think back with me to 2010 you’ll recall that was just after the Tea Party movement took off, and we had a wave of congressional Republicans elected, oftentimes Republicans who were beating other Republican incumbents, taking more extreme positions. And Mike Pompeo was one of those freshmen congressional members that year when he got elected and started his service in 2011. He was elected with heavy support from Koch Industries and its employees, as well as Americans for Prosperity, which is the flagship kind of faux-grassroots army that Charles Koch has created to knock on people’s doors and get them to vote for candidates that Charles Koch prefers.

And Mike Pompeo, over his career, took three hundred seventy five thousand dollars from Koch Industries and Koch employees. It was by far his largest source of money. No other company came close to that. And the congressman from Koch, as he is known, really lived up to his name. He did things from trying to cut the Environmental Protection Agency’s greenhouse gas registry program to taking away our right to know more information about GMOs in food, or toxic chemicals that could be going onto the market and impacting us. He’s really not in favor of giving the public the information they need in order to make decisions about their lives.

SHARMINI PERIES: All right. Now, I understand from state, or I guess when we were digging and researching to do this interview with you, we learned that April 1st is the confirmation hearing for Pompeo to be questioned by Congress in terms of his, I guess, competency for secretary of state. Now, Connor, imagine you being one of those congressmen or congresswomen who is going to be able to question him. What kind of policy questions would you ask him that might expose what you know about Pompeo, and his connections to the Koch Brothers and the way in which he’s been influenced as a congressman?

CONNOR GIBSON: One question I have is how long he continued to do business with Koch Industries. You mentioned that he helped launch a company called Thayer Aerospace, and that included investment money from a Koch Industries subsidiary. He also did business with Koch Industries through a company called Century International, which he was the president of. They were selling oilfield equipment together in Brazil, they being Pompeo and a couple of subsidiaries of Koch Industries. And it’s not clear to me when that relationship ended. I want to know if he entered public service still doing business with the Koch brothers, and I would love to know if he’s still doing business with any oil companies today that could compromise his commitment to things like solving climate change with other countries.

Now, not that I’m under the illusion that he’s actually going to try to do that. Unfortunately, even Exxon Mobil had a stronger position on climate change than Mike Pompeo does.

SHARMINI PERIES: Connor, the US does have a seat at the Paris climate policy agreement table. With this kind of secretary of state, is there still some negotiations that could take place at the policy level that sounds hopeful for the United States?

CONNOR GIBSON: I hate to offer a grim prognosis, but Mike Pompeo declared that he would be willing to do nothing on climate change. He signed the Americans for Prosperity no climate tax pledge. I wouldn’t expect him to break from that position as secretary of state, especially as he’s working for a climate change denying president.

Mike Pompeo, when he was confirmed for the CIA in the Senate, he told one of the senators from California that he didn’t even know what NASA’s position on climate change is, so I don’t expect Mike Pompeo to be prepared to go negotiate with other countries when he doesn’t even understand what the premier scientific organization in our country has to say about climate change. If I was any other country I would not be taking us particularly seriously even if the US does have a seat at that table.

Luckily at least there are other aspects, other people in our country, that are sending the message internationally that it’s not the entire US that doesn’t care about climate change, it’s just this current regime. And we’ve seen certain governors step up their commitments to cutting greenhouse gas emissions and boosting jobs in the clean energy sector, the kinds of solutions we really need in order to move away from the global climate crisis.

SHARMINI PERIES: Now, there was some talk of the international community that has signed the Paris agreement, including France, putting some pressure on the US, and in fact to even consider things like economic sanctions for withdrawing from the climate agreement. Do you see any of this being effective in terms of pushing the US into a greater commitment?

CONNOR GIBSON: You know, it would depend on the kind of sanction. That’s a fairly unprecedented action, at least in terms of the climate negotiations on the world stage. Although I would say the problem is serious enough that I understand why a country would consider imposing economic sanctions. I think a lot of that is going to have to do with other international issues that are not just climate change related, such as the tariffs that Trump just placed on international steel imports. That kind of action is, I think, more likely to elicit a reaction from other countries in terms of sanctions than climate change policy. But I wouldn’t dismiss other countries threatening to take more affirmative action when it comes to holding the US accountable for being absent on the climate conversation.

Connor Gibson does research for Greenpeace’s Investigations team. He focuses on polluting industries, their front groups and PR operatives, particularly focusing on the Koch Brothers. Connor joined Greenpeace Investigations in 2010 after completing an environmental studies degree at the University of Vermont. He is based in Oakland, CA.