Michael Hudson: Crippling student debt, which is also a drag on the whole ecnonomy, developed as governments pushed the burden of higher education costs onto students and pushed them into the arms of the banks

Michael Hudson: Crippling student debt, which is also a drag on the whole ecnonomy, developed as governments pushed the burden of higher education costs onto students and pushed them into the arms of the banks

Government Debt and Deficits Are Not the Problem - Private Debt Is 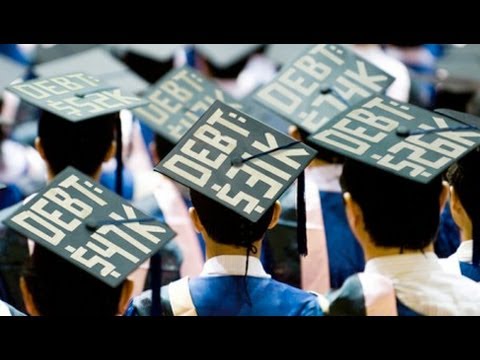 A recent New York Times editorial about the student debt says this:

“The Federal Reserve Bank of New York recently released a study showing just why many young people are being strangled by student loans. It found that 43 percent of 25-year-olds had student debt in 2012, an increase from 27 percent in 2004.”

Further on in the editorial, they say:

“According to the new study, student debt almost tripled between 2004 and 2012, and is approaching $1 trillion, while the percentage of borrowers who were more than 90 days delinquent had risen to 17 percent, from 10 percent in 2004. In addition, student loan debt was the only kind of household debt that continued to rise through the Great Recession, and it is now the second largest after mortgage debt.”

Now joining us to talk about the underlying causes of the student debt, possible solutions to it, is Michael Hudson. He was a Wall Street financial analyst and is now a distinguished research professor of economics at the University of Missouri–Kansas City. His recent books are The Bubble and Beyond and Finance Capitalism and Its Discontents.

Thanks for joining us, Michael.

JAY: So let’s get into the sort of underlying systemic reasons why there was so much student debt, and then let’s talk about what could be done about it.

HUDSON: Well, one reason there’s so much student debt is the whole educational system has been transformed completely in the last generation. When I went to school at the University of Chicago, it cost about $500 a semester for me to go there in the 1950s. Now it’s about $25,000 a semester.

JAY: Twenty-five thousand’s a deal compared to some schools.

HUDSON: To some schools. And what it means now is that people had thought that getting a higher education was going to be the way into the middle class. But now it’s become a larger burden on them than the mortgage debt, and especially now that the lower fifth of Americans can’t get mortgage debts. Student loans can absorb 25 or 30 percent of their income, as much as housing used to do.

So the problem is that education has been financialized. Just like roads are being turned into toll roads and sold off to Wall Street firms, you’ve had the school system basically become an appendage of the commercial banking system.

And it’s interesting that when The New York Times or The Wall Street Journal talk about student debt, they talk about it from two perspectives. One, how can we politicians save the banks from losing money on the debt? By tightening the screws on the debtors. We’ve got to make these deadbeats pay. And The Wall Street Journal today said, well, student loans are just another example of Obama’s socialism. Well, it’s not socialism when you don’t have the state running the education.

But when you have a privatized education department school running it and when you’ve had a phenomenon of last ten years of—first of all, you’ve had much less public support of education, less revenue sharing from the government, less state support. And at the same time, you’ve had an increasing financialization of the organization of the schools.

But basically now that they have raised the tuition so sharply that the results of the tuition have not gone to pay for higher professors. They have been replacing full-time tenured professors with part-time professors. The president of New York University last week said, we’re in business to make money, basically, and if we can save money by hiring part-time professors at one-tenth the rate of tenured professors, we’re going to do it. And let me tell you, nobody has job security at New York University. So you’re having the tuition go up.

And the question is: how are they going to make the students pay for it? Well, in 2005 they rewrote the bankruptcy law so that the government would guarantee student loans, so they would create this vast, $1 trillion market for the banks in making student loan, a market bigger than the banks’ credit card. And at the same time, the Republicans in Congress—or the Democrats got the Republicans to pressure them to say, well, if the public’s guaranteeing it, we have to make sure that the students who borrow cannot wipe out this loan by bankruptcy.

In America, normally in every country, if you go into debt, you’re allowed to wipe out your loan when you go bankrupt and you can’t pay. Well, students are graduating now with a $200,000, $300,000 worth of student loan debt. They are unable to get jobs. They’re living with their parents. They cannot afford to marry and form new households.

JAY: In fact, there was a recent study that the majority of new jobs won’t even require a high school diploma, never mind a university education.

JAY: Okay. So if you look at the New York Times editorial I was quoting, when it comes to solutions, it’s a public-private partnership for refinancing. It’s not about breaking the chains between students and banks.

HUDSON: That’s right. And the result is what they’ve done is raise the cost of living tremendously.

Basically, 100 years ago everybody thought of education as being a public service, much like roads and public utilities. And the idea was to keep down the price of public services so that you lower the cost of living. And that lowers the cost of business, because companies don’t have to pay new recruits, new labor, so much that they have to pay for these services. The idea was to make the economy more competitive.

When people are talking about de-industrialization of America and you realize what an engineer, a doctor, a dentist, a lawyer has to pay to get through school, you realize why American labor is being priced out of the market. So much of the income of—25 percent to 30 percent of the income goes to pay the student loan debt, 40 percent—43 percent now under government guarantees just for mortgage debt. Then already you’re dealing with about 70 percent of income before you begin to pay the other 15 percent in wage withholding for Social Security and Medicare. When people ask, why is the economy slowing down so much, why are people not buying the goods and services they produce, well, the reason is they’re paying the banks.

So what they’ve done by insisting on tight credit standards for the debtors, by not letting them wipe out the debt through bankruptcy, by not reducing the student loans to the real ability to repay, they’re contributing to the depression.

And the government is—if it were running schools like a public utility, like an electric company or a gas company, they wouldn’t let the upper management be taking more and more money. They wouldn’t let Mr. Lew, who was not even the president of NYU, make $1.2 million in salary, get paid $3 million when he left. They wouldn’t let this kind of siphoning off of wealth at the top, pressing down the professors, lowering the teaching standards, and just telling the students, we’re here not to give you education, we’re here to give you a union card to get into the middle class, and it’s going to cost you. And that’s what they’re selling. They’re selling the union card to get into—.

JAY: The demand that came out of the Quebec student strike last summer, which—hundreds of thousands of people in the streets, and it’s a demand you can see in student movements in different parts of the world, is that university, as all education, should be a right and there should actually be no tuition. Is that what it means when you’re saying education should be a public utility?

HUDSON: Yes, and that’s how it used to be 100 years ago. For instance, in New York City, it cost more money to get your child into kindergarten and grade school than it does to go to college in most universities throughout the whole country.

HUDSON: Private school. America was divided into squares all for the local education districts, and the whole American tax system, the American geography was shaped by public education. Here is a school district. It’s going to finance itself by local property taxes. Well, now what’s happened is there’s been a disconnect between property taxes and education. The property owners, especially the schools that are the largest ones, don’t have to pay property taxes. All of a sudden, instead of having the property owners pay for education, you freed property owners in this country from having to pay. The government is refusing to pay and is pushing all of the pressure for education on the students. And because students haven’t yet got a job, they’re lent the money.

So somehow they’ve turned the educational system into an adjunct of the banking system and the real estate system, just to make more money for—a vehicle for banks to make money that is guaranteed. They’re guaranteed at a markup. And then they say, our most profitable area of lending is student loans, and that’s our compensation for risk. And the risk, apparently, is that they can’t give enough money to the politicians to guarantee to pay all of the loans for the defaults that you mentioned at the beginning of this interview.

Of course there are defaults. If you graduate and the economy’s shrinking and there are no jobs, of course you’re not going to be able to pay. Of course you’re going to live with your parents unless your parents give you a trust fund. And you’re not going to be able to buy new apartments. And the educational—the student loan debt is part of the overall financial problem that’s depressing the economy right now.

JAY: Great. Thanks very much, Michael.