The IMF foretells of vulnerable banks in US and EU while enabling unsustainable debt-leveraging, says economist Michael Hudson

The IMF foretells of vulnerable banks in US and EU while enabling unsustainable debt-leveraging, says economist Michael Hudson 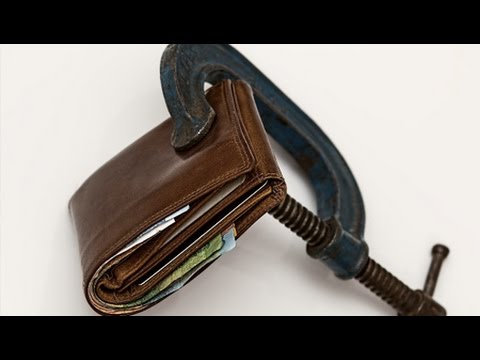 KIM BROWN, TRNN: Welcome to The Real News Network. I’m Kim Brown, in Baltimore. With the worst of the great recession, supposedly, behind us, economic analysts still see signs that we’re not yet completely out of the woods. A new report released Wednesday by the International Monetary Fund shows that some banks in the United States and Europe may not be strong enough to survive another downturn, even with States assistance.

Joining us from New York is Michael Hudson. Michael is a Distinguished Research Professor of Economics at the University of Missouri, Kansas City. His latest book is Killing the Host: How Financial Parasites and Debt Bondage Destroy the Global Economy. Michael, thanks again for joining us.

MICHAEL HUDSON: Its good to be here, but we can’t get out of the woods.

BROWN: Okay, let’s get into that. The IMF report on financial stability says, in spite of banks being stronger now than before the economic crisis of 2007-2008, about twenty-five percent of US banks and about a third of European banks are too weak to even benefit from a potential rise in interest rates and any recovery aid, should the global economy take a downward turn. But before we get into any specific questions about the health of banks, Michael, are we still in a recession or are we firmly in a recovery now?

HUDSON: We are not in a recovery and we’re not really in a traditional recession. People think of a business cycle and a boom as followed by a recession and then there are automatic stabilizers that revive the economy, but this time, we can’t revive. And the reason is that every recovery since 1945 has begun with a higher, and higher, and higher level of debt. And the debt is so high now that since 2008 we’ve been in what I call, “debt deflation.” There’s people that have to pay so much money to the banks that they don’t have enough money to buy the goods and services they produce. So there’s not new investment, there’s not new employment, markets are shrinking, and people are defaulting, and the companies can’t pay the banks.

The banks’ product is debt. They try to tell customers that debts are good for you but the customers can’t afford any more debt so there’s no way the banks can continue their current business plan. In fact, there’s no way that banks can be paid. That’s what the IMF doesn’t follow through its analysis in saying look, the banks are broke because the financial system is broke and the financial system is broke because the whole idea of trying to get rich by running into debt doesn’t work and it was all a false model. So really, at the end of long cycle that began in 1945, loading the economy with debt and we’re not going to be able to get out of it until you write down the debts. And that’s what the IMF thinks is unthinkable. It can’t say that because its supposed to represent the interest of the banks so all it can say is, “Gee, the banks won’t make money even if there is a recovery.” But there isn’t a recovery because people have to pay the banks and its all a vicious circle and, basically, they’re throwing up their hands and they don’t know what to do.

BROWN: Well, Michael, help us to figure out why has growth been so weak over these past eight to six years, or so.

We’re in a chronic debt-deflation. There’s no way we can recover unless you write down the debts. And that’s what the IMF basically is implying but its not spelling it out because that’s not what is said in polite company.

BROWN: Michael the headline from MarketWatch about this IMF report, it reads, “Forget too big to fail. The big concern is banks too weak to survive.” If big banks almost capsized the global financial system, are weaker banks actually better for consumers?

HUDSON: Banks that are very narrow and do what banks used to do, before President Clinton abolished Glass-Steagall in 1999. Small banks that lend to consumers are fine. Most banks, Deutsche Bank is at the top of the spectrum here, banks that have decided, well, we can’t make money lending to barbers anymore so we’re going to the second business plan, we’re going to lend money to casino capitalists. That is, we’re going to lend money to people who wanna gamble on derivatives. Now, a derivative is a bet whether a stock, or a bond, or a real estate is going to go up or down. There’s a winner and a loser, its like betting on a horserace. So the biggest bank lending for gambles, not for real production, not for investment, but just for gambles, was Deutsche Bank. So the borrowers borrowed from Deutsche Bank to gamble. What’s the best gamble in the world, right now? Its betting if Deutsche Bank stock is going to go down. All the short sellers borrowed money from their banks to place bets that Deutsche Bank stock is gonna go down. Now, its ringing its hands and saying, oh the speculators are killing us. But its Deutsche Bank and the other banks that are providing all the money to the speculators to bet on credit.

BROWN: Michael, the IMF report says that in the Eurozone, if the Eurozone governments could help banks dump bad loans, it would have a positive effect on bank capital. What would be the effect on consumers in the EU economy, at large, if banks were able to just dump these bad loans?

HUDSON: Its really very simple mathematics. You have to abolish pension plans. You have to abolish all social spending. You have to raise taxes. You have to have, at least, fifty percent of the European population emigrate, either to Russia or China. You would have to have mass starvation. Very simple. That’s the price that the Eurozone thinks is well worth paying. It’s the price that it thought Greece is worth paying. To save the banks, you would have to turn the entire Eurozone into Greece. You’ll have to have the governments sell off all of their public domains; sell off their railroads, sell off their public land. You’ll have to, essentially, introduce neo-feudalism. You’ll have to roll the clock of history back, a thousand years, and reduce the European population to debt slavery. Simple solution. It’s a solution that the Eurozone has imposed on Greece. And it’s a solution that the leaders and the banks are urging for responsible economists to promote for the population, at large.

BROWN: Let’s talk about the other little nugget of information released by the IMF about debt. Global debt has now reached about a hundred and fifty-two trillion dollars. This includes government debt, household debt, non-financial firms debt. What does all this debt mean for the global financial system and for everyday people here, Michael?

HUDSON: It means that the only way people can repay the debt is by cutting their living standards very drastically, but agreeing to shift their pension plans from defined benefit plans, when you know what you’re going to get, into just defined contribution plans, where you put money in like a roach motel and you don’t know what’s coming out. You’ll get rid of social security, for governments. It means you’ll, essentially, abolish government and turn it over to the banking system to run with an idea that the role of governments is to extract income from the economy to pay to the bondholders and the banks. When you say “paying the banks,” what they really mean is paying the bank bondholders. Which are, basically, the one percent. What you’re really seeing right now in the IMF report, in this growth of debt, is the one percent of the population owns maybe three-quarters of all this debt. This means that there’s a choice. Either you can save the economy, or you can save the one percent from losing a single penny. And every government, from the Obama administration, right through to Angela Merkel, the Eurozone and the IMF say, we’re gonna save the banks, not the economy. No price is too high to pay to try to make the system go a little bit longer, a little bit longer. But the fact is that ultimately it can’t be saved, because of the mathematics that are involved. Debts grow, and grow, and grow. And the more they grow, the more they shrink the economy and when you shrink the economy, you shrink the ability to pay the debts, so its all an illusion. The question is how long are people going to be willing to live in this illusion?

BROWN: That was my next question for you. Not only how long are people going to be able to live in this illusion but how much longer is this illusion actually sustainable before we see another collapse of economies around the world? Is this something that is impending, that we should just be expecting to come, we should be readying ourselves for this?

HUDSON: We’re still in the same collapse that began after 2008. There’s not a new collapse, there hasn’t been any recovery. Wages for the ninety-nine percent have gone down, steadily, since 2008. They’ve gone down, especially, for the bottom twenty-five percent of the population. They’ve gone down, especially, for Blacks and Hispanics and for blue collar workers. Their net worth has actually turned negative. And they don’t have enough money to get by. In fact, one of the big consulting firms just did a study of the millennials. Ernst and Young did a study and they found seventy-eight percent of millennials are worried about not having enough good paying job opportunity to pay off their student loans. Seventy-four percent can’t pay the health care if they get sick. Seventy-nine percent don’t have enough money to live when they retire. So, already, we’re having a whole generation that’s coming on, not only here but also in Europe, that isn’t able to get jobs and the only way it can live is if they have rich enough parents who have given them a trust fund.

BROWN: We’ve been speaking with Michael Hudson. Michael is a Distinguished Research Professor of Economics at the University of Missouri, Kansas City. His latest book is Killing the Host: How Financial Parasites and Debt Bondage Destroy the Global Economy. Michael, you said you had another book coming out, is that right?

HUDSON: Yes, later this month. It’ll be J is for Junk Economics. And it’s a review of why the economists promise that somehow we’ll recover. Why this is basically junk and why in order to be an economist these days, you have to participate in this fairytale that somehow we can recover and still make the banks rich. And it’s a fairytale. And J is for Junk Economics is about why it won’t work.

BROWN: Coming to a bookstore, near you, later this year. Michael, we appreciate you lending your time and expertise to us, as always. Thank you.

HUDSON: It was good to be here.