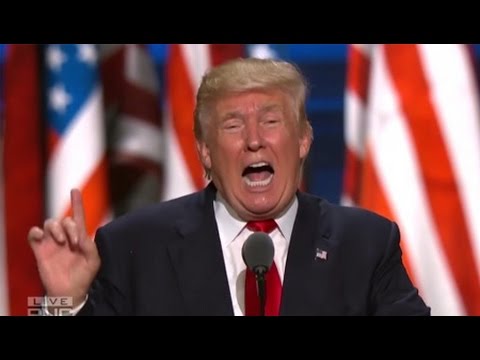 On Friday, just after the Republican National Congress wrapped up with its presidential candidate, Donald Trump, Paul Krugman of the New York Times penned an article titled “Donald Trump: The Siberian Candidate.” He said in it, if elected, would Donald Trump be Vladimir Putin’s man in the White House? Krugman himself is worried as ludicrous and outrageous as the question sounds, the Trump campaign’s recent behavior has quite a few foreign policy experts wondering, he says, just what kind of hold Mr. Putin has over the Republican nominee, and whether that influence will continue if he wins.

Well, let’s unravel that statement with Michael Hudson. He’s joining us from New York. Michael is a distinguished research professor of economics at the University of Missouri Kansas City. His latest book is Killing the Host: How Financial Parasites and Debt Bondage Destroyed the Global Economy. Thank you so much for joining us, Michael.

MICHAEL HUDSON: It’s good to be here, Sharmini. It’s been an exciting week.

PERIES: So let’s take a look at this article by Paul Krugman. Where is he going with this analysis about the Siberian candidate?

HUDSON: Well, Krugman has joined the ranks of the neocons, as well as the neoliberals, and they’re terrified that they’re losing control of the Republican Party. For the last half-century the Republican Party has been pro-Cold War, corporatist. And Trump has actually, is reversing that. Reversing the whole traditional platform. And that really worries the neocons.

Until his speech, the whole Republican Convention, every speaker had avoided dealing with economic policy issues. No one referred to the party platform, which isn’t very good. And it was mostly an attack on Hillary. Chants of “lock her up.” And Trump children, aimed to try to humanize him and make him look like a loving man.

But finally came Trump’s speech, and this was for the first time, policy was there. And he’s making a left run around Hillary. He appealed twice to Bernie Sanders supporters, and the two major policies that he outlined in the speech broke radically from the Republican traditional right-wing stance. And that is called destroying the party by the right wing, and Trump said he’s not destroying the party, he’s building it up and appealing to labor, and appealing to the rational interest that otherwise had been backing Bernie Sanders.

So in terms of national security, he wanted to roll back NATO spending. And he made it clear, roll back military spending. We can spend it on infrastructure, we can spend it on employing American labor. And in the speech, he said, look, we don’t need foreign military bases and foreign spending to defend our allies. We can defend them from the United States, because in today’s world, the only kind of war we’re going to have is atomic war. Nobody’s going to invade another country. We’re not going to send American troops to invade Russia, if it were to attack. So nobody’s even talking about that. So let’s be realistic.

Well, being realistic has driven other people crazy. Not only did Krugman say that Trump would, quote, actually follow a pro-Putin foreign policy at the expense of America’s allies, and he’s referring to the Ukraine, basically, and it’s at–he’s become a lobbyist for the military-industrial complex. But also, at the Washington Post you had Anne Applebaum call him explicitly the Manchurian candidate, referring to the 1962 movie, and rejecting the neocon craziness. This has just driven them nutty because they’re worried of losing the Republican Party under Trump.

In economic policy, Trump also opposes the Trans-Pacific Partnership and the TTIP trade and corporate power grab [inaud.] with Europe to block public regulation. And this was also a major plank of Bernie Sanders’ campaign against Hillary, which Trump knows. The corporatist wings of both the Republican and the Democratic Parties fear that Trump’s opposition to NAFTA and TPP will lead the Republicans not to push through in the lame duck session after November. The whole plan has been that once the election’s over, Obama will then get all the Republicans together and will pass the Republican platform that he’s been pushing for the last eight years. The Trans-Pacific Partnership trade agreement with Europe, and the other neoliberal policies.

And when he wrote this, quote, Trump is decimating the things Republicans stood for: NATO, entitlement reform, in other words winding back Social Security, and support of the corporatist Trans-Pacific Partnership. So it’s almost hilarious to see what happens. And Trump also has reversed the traditional Republican fiscal responsibility austerity policy, that not a word about balanced budgets anymore. And he said he was going to run at policy to employ American labor and put it back to work on infrastructure. Again, he’s made a left runaround Hillary. He says he wants to reinstate Glass-Steagall, whereas the Clintons were the people that got rid of it.

And this may be for show, simply to brand Hillary as Wall Street’s candidate. But it also seems to actually be an attack on Wall Street. And Trump’s genius was to turn around all the attacks on him as being a shady businessman. He said, look, nobody knows the system better than me, which is why I alone can fix it. Now, what that means, basically, as a businessman, he knows the fine print by which they’ve been screwing the people. So only someone like him knows how to fight against Wall Street. After all, he’s been screwing the Wall Street banks for years [inaud.]. And he can now fight for the population fighting against Wall Street, just as he’s been able to stiff the banks.

So it’s sort of hilarious. On the one hand, leading up to him you had Republicans saying throw Hillary in jail. And Hillary saying throw Trump in the [inaud.]. And so you have the whole election coming up with—.

PERIES: Maybe we should take the lead and lock them all up. Michael, what is becoming very clear is that there’s a great deal of inconsistencies on the part of the Republican Party. Various people are talking different things, like if you hear Mike Pence, the vice presidential candidate, speak, and then you heard Donald Trump, and then you heard Ivanka Trump speak yesterday, they’re all saying different things. It’s like different strokes for different folks. And I guess in marketing and marketeering, which Trump is the master of, that makes perfect sense. Just tap on everybody’s shoulder so they feel like they’re the ones being represented as spoken about, and they’re going to have their issues addressed in some way.

When it comes–he also in that sense appealed to, as you said, the Bernie Sanders people when he talked about the trade deals. You know, he’s been talking about NAFTA, TTIP, TTP, and these are areas that really is traditionally been the left of the left issues. And now there’s this, that he’s anti-these trade deals, and he’s going to bring jobs home. What does that mean?

HUDSON: Well, you’re right when you say there’s a policy confusion within the Republican Party. And I guess if this were marketing, it’s the idea that everybody hears what they want to hear. And if they can hear right-wing gay bashing from the Indiana governor, and they can hear Trump talking about hte LGBTQ, everybody will sort of be on the side.

But I listened to what Governor Pence said about defending Trump’s views on NATO. And he’s so smooth. So slick, that he translated what Trump said in a way that no Republican conservative could really disagree with it. I think he was a very good pick for vice president, because he can, obviously he’s agreed to follow what Trump’s saying, and he’s so smooth, being a lawyer, that he can make it all appear much more reasonable than it would.

I think that the most, the biggest contradiction, was you can look at how the convention began with Governor Christie. Accusing Hillary of being pro-Russian when she’s actually threatening war, and criticizing her for not helping the Ukrainians when it was she who brought Victorian Nuland in to push the coup d’etat with the neo-nazis, and gave them $5 billion. And Trump reversed the whole thing and said no, no, no. I’m not anti-Russian, I’m pro-Russian. I’m not going to defend Ukrainians. Just the opposite.

And it’s obvious that the Republicans have fallen into line behind them. And no wonder the Democrats want them to lose. All of that–you’ve had the Koch brothers say we’re not going to give money to Trump, the Republicans, now. We’re backing Hillary. You’ve got the Chamber of Commerce saying because Trump isn’t for the corporate takeover of foreign trade, we’re now supporting the Democrats, not the Reepublicans.

So this is really the class war. And it’s the class war of Wall Street and the corporate sector of the Democratic side against Trump on the populist side. And who knows whether he really means what he says when he says he’s for the workers and he wants to rebuild the cities, put labor back to work. And when he says he’s for the blacks and Hispanics have to get jobs just like white people, maybe he’s telling the truth, because that certainly is the way that the country can be rebuilt in a positive way.

And the interesting thing is that all he gets from the Democrats is denunciations. So I can’t wait to see how Bernie Sanders is going to handle all this at the Democratic Convention next week.

PERIES: All right, Michael. A lot to continue discussing there. I thank you so much for joining us today and look forward to a report next week.

HUDSON: Yes, good to be here at this exciting time.