Economist Michael Hudson argues that a vote for Europe is not a vote for socialism, but for a very right-wing, hard right, corporatist Europe where the laws will be made by bureaucrats acting on behalf of the large financial centers

Economist Michael Hudson argues that a vote for Europe is not a vote for socialism, but for a very right-wing, hard right, corporatist Europe where the laws will be made by bureaucrats acting on behalf of the large financial centers 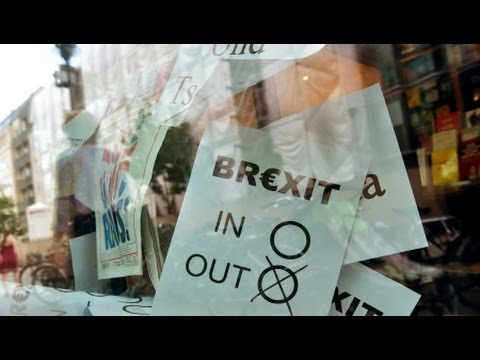 Britain’s referendum to leave the European Union, also known as Brexit, is still being agonized over by liberals as a vote of ignorance riddled with racism and anti-immigrant sentiments. But what is lesser known is an argument that the left used to oppose membership in the European Union due to its adaptation of neoliberalism and the surrendering of countries’ most important thing, which is macroeconomic policies, to the European Central Bank.

On top of that, many are concerned about the EU signing into place the Transatlantic Trade and Investment Partnership, also known as TTIP, which our next guest argues would eliminate government regulatory frameworks and place them in the hands of corporations.

Joining us now to discuss this is Michael Hudson. Micheal is a distinguished research professor of economics at the University of Missouri Kansas City. His latest book is “Killing the Host: How Financial Parasites and Debt Bondage Destroyed the Global Economy.”

Michael, thank you so much for joining us.

PERIES: So Michael, take us back. You’re referring to in some of your recent thoughts of a Maastricht and Lisbon treaties which stifled the ability of the ECB to engage in expansionary economic policies. What was stipulated in these treaties? Tell us more. And why is it being ignored now?

HUDSON: Well, what’s in the treaties is really exactly what has been ignored by the US press coverage since the Brexit vote last week. There’s been a treatment as if, look at these dumb British. They don’t know what’s good for them. It’s as if the vote against remaining in Europe in England is just like the supporters of Donald Trump here against Hillary. It’s as if, well, we’re dealing with a racist movement.

And what the, both voters against Europe, for Brexit in England, were voting for was the fact that they’re not having many job opportunities. They’re not having an ability to afford rents, to live near where they work if they’re anywhere near London. They realize that the economy is being stacked against them and the reason the economy’s being stacked against them in England is, and in Europe, is because of what you mentioned: the mass Maastricht and the Lisbon treaties.

And these treaties, along with the German constitution, force the actual policies, the text policy and the spending policy in European governments to be determined not by voters but by bureaucrats who are appointed by the banks. And the banks’ fiscal philosophy is, well, you want to support the banks. You want to support the creditors. If you want stability you have to have deflation. You have to have wages going down. You have to sacrifice the pension funds in favor of spending on bailing out the banks.

And on the second, the sort of compliment to the TTIP, the Transatlantic Trade and Investment Partnership, is NATO because NATO turns out to sort of being, dominating the whole bureaucracy there, and under NATO agreements two percent of gross domestic product of every European country has to be spent on buying arms from American manufacturers or a few French manufacturers. They have to be spent on military. And the way that this is maintained is pretending that Russia is about to invade Europe, and you have to protect Europe against the Russian invasion or an invasion of elephants from Iran by buying American military industrial complex products.

So, there’s a lot of discussion in England of, why do we have to support the American military industrial complex with the budget instead of supporting labor, instead of supporting public health? In the US press, the New York Times and the others, they say, well, the voters against Europe didn’t like the fact that they have to wait for long lines before national health service because there are immigrants there.

Well, the reason there are long kinds is because the budgets have all been cut back on health spending and on other social spending in order to support the financial city of London and other creditors and in order to support US-dictated military policies. So the problem isn’t that Europe is run by bureaucrats. It’s that the bureaucrats are right-wing and that there’s a lot of pressure, even in today’s paper, to push for the transatlantic agreement that essentially is Mussolini’s corporate state.

Also this week you have the Canadian pipeline from the tar sands suing the United States and the Obama administration for over $100 million because they said, well, your environmental regulations prevent us from polluting your environment, so you have to pay us tar sand producers and pipeline producers, the financiers, as much as we could have made if you would have let us pollute your environment. If you have anti-fracking laws we can sue you because you’re protecting the water and your protecting of your water costs us a lot of money.

Well, the way in which the Transatlantic Trade and Investment Partnership is done is, you have referees. Now, any of your listeners who have ever gone to a court with a credit card company or anyone else where they say you can’t have a jury trial, you have a referee, you know that the system’s fixed because the referees basically get their jobs by working for the plaintiffs.

HUDSON: And the plaintiffs in this case will be the companies. The company gets–They’re a three-man panel. The company gets to appoint one referee. The governments get to appoint the other, and if there’s a tie, and obviously in a conflict of interests there’s a tie, there’s a third referee. The third referee is the head of the World Bank that’s appointed automatically by the Americans, almost always from the defense department. from McNamara and John McCloy, [Sellick], everybody on. And obviously the World Bank is going to side with the American exporter and the American company or just with the transnational company in every case because that’s where their mindset is.

So, a vote for Europe really is a vote for not the kind of socialist Europe that people talked about 50 years ago, but for a very right-wing, hard right, corporatist, almost to say a fascist Europe where voters won’t count, where the laws will be made by bureaucrats acting on behalf of the large financial centers, on behalf of their clients, which are the large corporations, against the people.

And that’s why the British opposed, the theory on which they opposed it. It’s why Podemos in Spain urged people to vote itself into power this week. And despite the fact that the exit polls showed Podemos winning very heavily, somehow the machines reported that Podemos did not vote to reflect the exit polls but the Socialists won.

This is the other strange thing that’s happened in Europe, and it affects all of this. That the parties calling themselves socialist are the opposite of what socialism used to be.

PERIES: A lot of things to think about there in terms of building new political systems. I thank you so much for joining us today.

HUDSON: Happy to be here.