Quantitative Easing for Whom? (2/2)

Quantitative Easing for Whom? 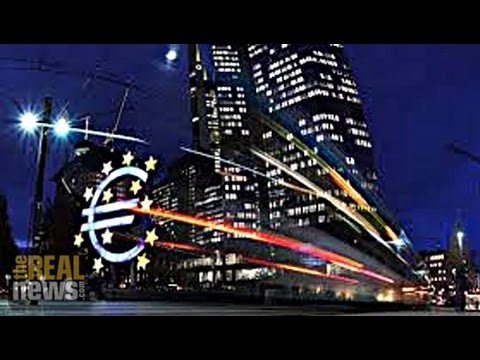 And let me reintroduce Michael. Michael is the distinguished research professor of economics at the University of Missouri-Kansas City. His two newest books are The Bubble and Beyond and Finance Capitalism at Its Discontents. His upcoming book is titled Killing the Host: How Financial Parasites and Debt Bondage Destroyed the Global Economy.

Michael, thank you again for joining us.

PERIES: So, Michael, what’s wrong with with the ECB has announced in terms of a trillion euros worth of quantitative easing for Europe?

HUDSON: They head of the European Central Bank, Mario Draghi, has said that he’ll do whatever it takes to keep banks afloat. He doesn’t say whatever it takes to help economic recovery or to help labor more; it’s to help banks make more money because he used to be vice chairman of Goldman Sachs during 2002 to 2005. And his view is that of Wall Street and of the financial sector. It’s not a vantage point of helping labor or helping economies grow. So it’s not surprising that the trillion euros of new money that the Central Bank of Europe is creating hasn’t gone to help Greece, for instance, survive, hasn’t gone to help Greece, Spain, Italy, or Portugal get out of depression by fueling government spending. It’s been given away to the banks to buy bonds and stocks, including buying American stocks and bonds. It’s all the idea that if you can make the financial sector richer, if you can make the one percent and the 10 percent richer, it’s all going to trickle down. This is the view of Paul Krugman, it’s the view of the advisers that Obama has had. It’s trickle-down economics. And instead of trickling down, what it does is drive a wedge in the economy by increasing the value of stocks and bonds and real estate and wealth against labor. So it’s quantitative easing that is largely behind the fact that the distribution of wealth has become worse rather than better since 2008.

PERIES: Now, Michael, one of the things that has happened in Europe that you wrote to me actually in an email was the disappearing central banks’ role in stimulating economies. Why is this an issue?

HUDSON: Well, because central banks originally were designed to monetize government deficits. Government were supposed to spend money into the economy. And the idea of spending money into the economy is that that helps economies grow. Well, in Europe, the Lisbon agreements say governments can’t run more than a 3 percent of national income as a deficit. And the role of the central banks is not to give a penny to governments. They say that if you give a penny to government, you’ll have hyperinflation like you had in Weimar. So the central bank can only give money to banks to invest in stocks and bonds, but not any government spending at all. So the result of this policy of not funding government deficits is that the economy, to grow, has to be entirely dependent on commercial banks for credit.

Now, we had this situation in the United States in the last few years of the Clinton administration when the United States actually ran a budget surplus instead of a deficit. Now, how could the United States grow when there’s–running a budget surplus that’s sucking money out of the economy? The answer is the banks have to supply the money. But, again, the banks only supplied money in the form of junk mortgages, in the form of an economic bubble, in the form of takeover loans, in the form of a stock market bubble. And the interest of the banks is not in helping the economies grow; it’s in extracting interest from the economy. It’s using the wealth that people have to lobby for privatization and for selloffs that–essentially, when you privatize a public utility, you give away a monopoly and you deregulate the economy and you let the monopoly essentially set up tollbooths over the economy, whether it’s for toll roads or from communications or for whatever is being privatized as Greece is told to privatize. So you have quantitative easing is a policy going hand-in-hand with the insistence on privatization such as Greece has. So you’re having not only debt deflation as a result of depending more and more on the banks for the money to grow rather than on government spending into the economy. You’re having the governments not being able to spend on infrastructure, letting it fall apart, as is happening in bridges and tunnels in the United States. And then the government says, I’m sorry, the central bank doesn’t have enough money to help us build new infrastructure; we’ve got to sell it off to private investors who do have the money. Well, then you have the whole economy ending up looking like Chicago, which sold off its roads and its sidewalks and its parking meters to Goldman Sachs and to Wall Street, and all of a sudden the prices of parking, of driving, of living in Chicago went way, way up, and instead of lowering the costs as privatization promised, you have exactly the same phenomenon happening here that you had under Margaret Thatcher in London: the costs go way up. Transportation costs go way up. Road costs go up. Communications, internet costs, telephone costs, everything that is privatized goes way, way up. And the result is we’re turning into a rent-extractive, almost a neo-feudal economy.

PERIES: Michael, this is exactly what’s happening in Greece right now. The SYRIZA government is somewhat forced to continue privatization as a part of the agreement of the loans that they have been given by European banks. What could they do in this situation?

HUDSON: Well, this is really a scandal, because most privatizations are corrupt. In Greece, they’re almost as corrupt as they are the United States–well, nothing could be that corrupt. But the SYRIZA Party coming in said, wait a minute, the privatizations that have been done are by a governmental people to their own cronies at a giveaway price. How can we balance the budget if we’re giving away the public utilities instead of getting a fair price for them? The European Central Bank said, no, no, you have to give away privatization to cronies at pennies on the dollar just like Russia did under Yeltsin, just like the United States did with the railroad giveaways of the 19th century.

And remember, the American privatization [incompr.] cronies created essentially the ruling class of the 20th century. It created the stock market. Well, the same thing’s happening in Greece. It’s told, create a new oligarchy, endow a new kind of a feudal lord–although in the case of some monopoly lord, by giving them away, these privatization giveaways–and if you don’t do that, we’re going to bankrupt the banking system. Well, Varoufakis went back to the party congress in Parliament and said, will you approve this? Well, so far, the left wing in Greece has said, no, we won’t approve the giveaways. This is crazy. The pretense is that privatization is to make money. But the European central bank is really saying, no, no, you can’t make money; you have to give it away to your cronies, who are our cronies, and it’s all one happy financial family. This is escalating financial warfare.

And so I can assure you that neither Varoufakis nor SYRIZA has any interest at all in this kind of privatization giveaway. It’s trying to figure out some way of perhaps prosecuting the cronies for bribery, for internal connections, or figuring out some way of legally stopping the rotten policies that they’re told to follow by the European Central Bank, which, again, isn’t giving a single euro to Greece to help it get over the debt problem. The euros are only given to the financial sector to help declare war on the Greek government, the Spanish government, the Italian government. It’s really financial warfare trying to achieve the same thing that military warfare did in the past. It’s trying to grab the land, to grab control of the public infrastructure, to grab control of governments. And it’s doing it financially rather than militarily.

PERIES: Right. Michael, the SYRIZA Party last week did agree to the conditions of privatization, that they would not roll back on the existing agreements that had been made by previous government. They agreed to not roll back on ones that are underway, and that there actually not even averse to privatization as a statement by Yanis Varoufakis. What does all this mean for Greece?

HUDSON: The financial gun was put to their head, and if they wouldn’t have said that, there would have been a total breakdown, and the European Central Bank would have tried to bankrupt the Greek banks. So he didn’t have a choice. Everything that Varoufakis has written and all of everything that the political leader of SYRIZA has said has been exactly the opposite. So they had to give lip service to what they were told to do, and any agreement that’s made actually has to be ratified by Parliament. And so, what they’ve said is, okay, we’re going to play good cop, bad cop. We’ll be the good cops with you and we’ll let Parliament and our left wing be the bad cops and say, we’re not going to stand for this.

PERIES: As always, Michael, thank you so much for joining us. It’s always fun to have you on. And it’s so sad that issues we’re dealing with are so tragic for the people.

HUDSON: It’s really good to be here. Thank you so much, Sharmini.