Has the IMF Annexed Ukraine? 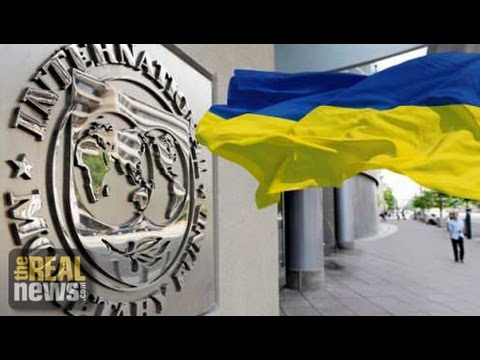 A ceasefire in Eastern Ukraine has been agreed to, following a marathon all-night, 17-hour negotiation between Russian President Vladimir Putin and Ukraine President Petro Poroshenko. They were flanked by other European leaders keeping vigil. Russia and Ukraine may have many differences, but what they have in common is a looming economic crisis, with oil prices taking a dive on the Russian side and a very expensive war they were not counting on on the Ukrainian side.

Joining us now to talk about all of this is Michael Hudson. He is a distinguished research professor of economics at the University of Missouri-Kansas City. His upcoming book is titled Killing the Host: How Financial Parasites and Debt Bondage Destroyed the Global Economy.

Michael, thank you, as always, for joining us.

PERIES: So, Michael, in a recent interview published in The National Interest magazine, you said that most media covers Russia as if it is the greatest threat to Ukraine. History suggests the IMF may be far more dangerous. What did you mean by that?

HUDSON: Well, the terms on which the IMF make loans, first of all, are based on austerity. The terms require more austerity and a withdrawal of all the public subsidies. Now you have Ukrainian population absolutely devastated. The only result of the IMF’s austerity a program that–the conditions that it’s laying down for making loans to Ukraine is you have to repay the debts. But you don’t have the ability to repay their debts. So there’s only one way to do it, and that’s the way that we’ve told Greece and other countries to do: you have to begin selling off whatever you have left of your public domain, or you have to have your meeting oligarchs take on partnerships with American or European investors, so that they can buy out into the monopolies in the Ukraine. So, essentially, the IMF has a two-stage one-two punch. The punch number one is: here’s the money; now you have to repay us after cutting back public spending and causing a depression. The two punch is: oh, you can’t pay us? I’m sorry that all of our projections are wrong. And the IMF has been wrong on Ukraine year after year, almost as much as it’s been wrong on Ireland and on Greece.

So now the real problem is: what is Ukraine going to have to sell off to pay the foreign debts that it gets for having waged the war that’s devastated the economy? Well, the main things that the foreign investors want are Ukrainian farmland. Monsanto has been buying into Ukraine. But Ukraine has a law against alienating its farmland and agricultural land to foreigners. And a matter of fact, its law is very much the same as what the Financial Times reports that Australia is wanting to do today, to block Chinese and American purchase of farmlands. The IMF’s position is you have to dismantle public regulations against foreign investment and you have to dismantle consumer production and environmental protection regulations. So, in other words, what is in store for Ukraine is a neoliberal policy that’s guaranteed to actually make it even worse. And in that sense, finance is war, finance is the new kind of warfare using finance and forced selloffs in the IMF is a new kind of battlefield. So I’m not sure how all of this is going to really help Ukraine, and it promises to lead to yet another crisis down the road very, very quickly.

PERIES: Michael, let’s unpack the debt of this crisis. Now, the war has led Ukraine into a deeper crisis. Talk about the devastation that has caused and what they have to manage in addition to what the IMF is trying to impose on it.

HUDSON: Well, when Kiev went to war against Eastern Ukraine, it fought primarily the coal mining region and the export region. Thirty-eight percent of Ukraine’s exports are to Russia. And yet this was the–the export capacity has been bombed out of existence. And, in fact, the electric companies that fuel the electricity to the coal mines been bombed out. So Ukraine can’t even supply itself with coal.

Now, that’s very–what is so striking about all this is that just a few weeks ago, on January 28, Christine Lagarde, the head of the IMF, said the IMF does not make loans to countries that are engaged in war. That would be funding one side or another. And yet Ukraine is involved in a civil war.

And also the IMF articles of agreement say that it cannot make loans to an insolvent country. So how on earth can the IMF be part of a loan bailout for the Ukraine if, number one, it’s at war, the war has to stop totally; number two, it’s insolvent? The only solution is that Ukraine will somehow scale back its debts to private investors. And that means a lot of contrary hedge funds investors.

So, again, the Financial Times today has an article showing that an American investor has $7 billion of Ukraine debts and wants to speculate in it. How is Ukraine going to treat the speculators? And then, finally, how is the IMF going to treat the fact that Russia’s sovereign fund lent 3 billion euros to the Ukraine on harsh terms through the London agreement terms that can’t be written down? Is the IMF going to insist that Russia take the same haircut that it’s imposing on the hedge funds? All of this is going to be the kind of conflict that’s going to take much more effort than even the solutions that we’ve seen over the last few days have taken on the military battlefront.

PERIES: And so how could Ukraine imagine getting out of this crisis?

HUDSON: It imagines it’ll get out of the crisis by the West giving it $50 billion and saying, here’s all the money you need, spend it as you want. That’s the extent of its imagination. This is fantasy. It’s living in a dream world, except that a few weeks ago, George Soros came out in The New York Review of Books and said, give Ukraine $50 billion and look at it as a down payment on military or with Russia. Well, immediately Kiev said, yes, we will only spend them on defensive arms. We will defend Ukraine all the way up to Siberia as we wipe out the Russians.

Today, yet another Financial Times article said, yes, give Ukraine the 50 billion that George Soros asked for. We’ve got to enable it to have enough money that it can fight America’s war against Russia. And the Europeans are saying, wait a minute, not only at the end of this, but there’ll be no more Ukrainians to fight, but the war is going to spread into Poland and into elsewhere, because if the money that’s given to Ukraine is really for what the Obama administration and Hillary and Soros are all pressing for to go to war with Russia, then Russia’s going to say, okay, if we’re being attacked by foreign troops, we’re going to have to not only bomb the troops, but the airports are coming in, the railway stations are coming in. We’re going to extended towards Europe. And apparently there are reports that Putin told Europe, look, you have two choices before you. The one choice: Europe, Germany, and Russia can be a very prosperous area. With Russia’s raw materials and European technology, we can be the most prosperous area in the world. Or you can go to war with us and you can be wiped out. Take your choice.

PERIES: Michael, complex and interesting times in Ukraine, as well as at the IMF. Thank you so much for joining us.