Speculation and Criminal Manipulation of Food and Commodities Prices

Michael Greenberger: Weak regulations on speculators swamping markets and lack of enforcement of existing laws on criminal intent, are driving up prices

Michael Greenberger: Weak regulations on speculators swamping markets and lack of enforcement of existing laws on criminal intent, are driving up prices

Speculation and Criminal Manipulation of Food and Commodities Prices 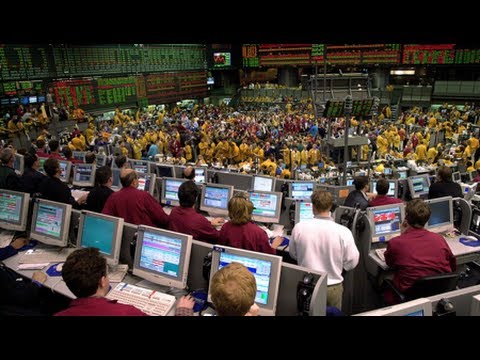 We’re continuing our discussion about the price of gas and the price of commodities, and we’re going to continue digging into this question of the commodity traders and their relationship to speculation and manipulation of the markets.

Now joining us again is Michael Greenberger. Michael is a professor at the University of Maryland School of Law, where he teaches homeland security and financial law. He’s a former division director at the U.S. Commodity Futures Trading Commission. He’s also a founder and director of the Center for Health and Homeland Security. Thanks for joining us again, Michael.

JAY: So we talked a bit about this in an earlier interview, but there are about a dozen major commodities companies we’veâ€”Glencore is one that’s come into the news recently ’cause it went public, I guess, a year and a half, two years ago and kind of opened up a window into this world of these major commodities traders. The Koch brothers are another group. Cargill we know of, are big commodity traders and players in agricultural products. But also JPMorgan, for example, apparently is the biggest commodities traders now, and Goldman is a big player, Barclays bank, all the big financial institutions, where they seem to have different departments playing different sides of this question. One department actually goes out and buys the physical commodity. Glencore, for example, owns mines all over the world. They own, apparently, 9 percent of the Russian wheat crop. They’re just about to buy a major French company that owns a major piece of Canadian wheat, actual land. Plus they hedge. Plus they’re accused of speculating, although Glencore denies they play derivatives. But they certainly hedge. The big financial institutions are playing all sides of this. So where doesâ€”first of all, I guess, from a regulatory, legal point of view, is these guys all claim what they’re doing is legal, even if it does wind up manipulating the market. So is it?

GREENBERGER: Well, I think you have toâ€”there’s two kinds of speculation going on here, both of which were intended by the passage of the Doddâ€“Frank law in July 2010 to be limited and constrained. The place that there is vulnerability here is in the futures market, where you actually hold a contract for future delivery rather than own the underlying commodity. Now, if that market gets overwhelmed by speculators, it will drive the price of the commodity up, and therefore not only will people benefit from having futures contracts that pay off big-time, but if they correspondingly hold the physicalâ€”the aluminum, the copper, the wheat, the oil, that price goes up as well. Doddâ€“Frank recognized that speculators in extreme can overwhelm these markets and asked the Commodity Futures Trading Commission to limit the participation of speculators so those markets adhered to supply-demand fundamentals. Unfortunately, in the implementation process, that rule was weakened to almost no effect, and then, once the rule was finalized, the weak rule, it was challenged by the banks in court. So the limits on speculation have essentially been wiped out despite Congress’s best efforts.

But there’s another problem here, and that is some of these participantsâ€”and I’m not saying who they are, but I’m sure there are enough there doing this that they are adversely affecting the priceâ€”are actually not just swamping the markets with investments, but they’re working with each other to drive the price up. That is a criminal problem. That is called criminal manipulation of the price. And that is why the president of the United States has now twice asked the Justice Department, once in April 2011 and once in March 2012, to please, please investigate these markets to see if there is criminal wrongdoing.

Now, those of us who watch these markets believe, despite the innocent flooding of these markets of speculators, which was supposed to be stopped by Doddâ€“Frank but has not, there are speculators out there who, with a criminal intent, are driving the price up. And my view and the view of many academic experts is if the Justice Department would just seriously investigate that kind of criminal manipulation, the price would come down dramatically, not just of oil, not just gasoline, not just of heating oil, but of agricultural products as well, ’cause the same things are happening in those markets.

We had one remedial process fail by Wall Street lobbying, and that is limiting speculation to a reasonable part of the market. And the second part is failing because of prosecutorial laxity, which is going after people who are criminally working with each other to drive the price up. And the quickest wayâ€”within a matter of weeks, if there were a serious investigation undertaken, if the FBI was called in, if records were subpoenaed, if market participants were interviewed and the Justice Department at least gave an indication, as they did when they went after the Enron conspirators in the early 2000s, that they were serious about this, just the appearance of a serious investigation would cause the criminal speculators to scatter like cockroaches scatter when lights are turned on.

GREENBERGER: The banks have already checkmated one of the principal limits in Doddâ€“Frank, which didn’t require showing criminal intent, just said that speculators’ participation in these markets should be drawn down from 80 percent of the markets to about 30 percent of markets, the historical average. The lobbyists on Wall Street, and because of the lack of attention of the public, have run roughshod over that.

Now, you cannot run roughshod over a prosecutor. And the thing that is now missing is that the Justice Department began a serious investigation here because there is doubtless criminal conduct here. I’m not going to name names, I’m not going to call anybody out, but I have every confidence that the appearance of a serious investigation would bring commodity staple prices down. That is not happening.

You say there’s a lot of profits here. If we didn’t investigate bank robbers, there would be a lot of profits made from going in and holding up banks. But we enforce burglary laws and theft laws in bank robberies. The same thing is happening in the commodity markets, and the prosecutors and de facto police have blindfolded themselves, stuffed their ears, and hold their noses, and appear to the public as if nothing is going on. If indictments were brought down, the public would be educated about this. It’s the total laxity here that is causing us not only to have a situation that will break the back of the recovery, but may walk the Republicans into the White House, control the Senate, and an increased representation in the House of Representatives. It is the only argument they have that gas prices are going up right now.

Michael Greenberger is a professor at theUniversity of Maryland School of Law, where he teaches a course entitled “Futures, Options and Derivatives.”Professor Greenberger serves as the Technical Advisor to the United Nations Commission of Experts of the President of the UN General Assembly on Reforms of the International Monetary and Financial System. He has recently…