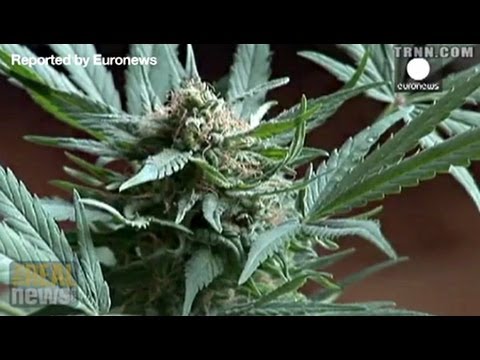 The Latin American country of Uruguay has become the first nation to fully legalize marijuana. Marijuana’s use was already permitted in Uruguay, but on Tuesday the country’s senate voted to also fully legalize its growth and sale. Starting next April, you can be able to buy pot at pharmacies for $1 a gram. The move was aimed at reducing the influence of drug cartels and increasing tax revenue.

Now joining us to discuss this is Morgan Fox. He’s the communications manager for the Marijuana Policy Project.

MORGAN FOX, COMMUNICATIONS MANAGER, MARIJUANA POLICY PROJECT: Thanks for having me.

NOOR: So talk about the significance of this move. It has been condemned by some opposition lawmakers in Uruguay, as well as the UN’s International Narcotics Control Board. And one of the main arguments is that–in opposing this, they say it will contribute to the earlier onset of addiction in users. What’s your response?

FOX: I think it’s very significant that Uruguay was the first country to fight back against the system of marijuana prohibition that was enforced upon the international community by the United States decades ago, and, you know, it’s very significant, considering that portions of the United States are starting to do the same. But now we are starting to see a larger contingent of Latin American countries–and, really, countries around the world–starting to question the system of prohibition that has been the norm for the last 40 years.

NOOR: And can you explain the UN’s position? Because, you know, around the world, and especially in places like Latin America, you see tremendous amounts of violence linked to illegal drugs. And so the argument goes: once you legalize marijuana’s distribution and its growth, you could help reduce some of this violence, reduce some of the influence of these drug cartels. What is the argument against this?

FOX: Well, one of the biggest reasons for any country to end marijuana prohibition and, you know, larger drug prohibition is because the illicit market being in control of this, you know, very, very popular and very profitable commodity automatically leads to violence, because these organizations can’t bring their business troubles and their disputes to courts. They have to settle them on the streets.

And, unfortunately, the United States for many decades has been using various political and economic pressures to force Latin American countries in particular to go along with exactly the type of prohibition that they want. And it’s resulted in massive amounts of violence in producer countries.

Now that’s starting to change, because Latin America is starting to see that these policies aren’t working at stemming the flow and the demand for drugs, and particularly marijuana. So by taking this commodity out of the hands of the illicit market and putting it into the hands of a regulated market, we can decrease a lot of the cash flow that’s going towards criminals, as well as make that market significantly safer.

With regards to earlier onset of addiction, as far as I understand, Uruguay is not going to allow this product to be sold to, you know, minors. So I don’t think that that’s really going to be an issue. If anything, it’s going to make it harder to get, because illicit dealers, who have no incentive to ID or to, you know, make sure that their business is well regulated and to keep their products out of the hands of minors, are basically going to go out of business.

NOOR: And can what’s happening in Uruguay be a model for other countries, like the United States? Some might argue that Uruguay is so small and maybe insignificant economically that this might not make as big of an impact as if a larger country had made this similar move.

But as the United States is the largest consumer of cannabis and all other illicit drugs, we’re really not going to see any serious effect until we allow the regulated, controlled sale of cannabis in this country.

NOOR: And, you know, our viewers will be familiar with the toll the war on drugs takes on the U.S. population, with extremely high incarceration rates in this country, the highest in the world, the highest prison population in the world in prison system that’s very racially biased against African American and Latinos. But can you just give us some of those numbers and those figures about the toll the war on drugs has taken?

FOX: Well, particularly as it relates to marijuana, the ACLU just released a very interesting report a few months ago showing that racial disparities exist in arrest rates nationwide, some as many as nine to one, whereas usage rates between blacks and whites are exactly the same. And whether or not this is motivated by some sort of endemic racism, the very fact of the matter is that the result is the same. People of color are being disproportionately targeted by the enforcement of drug laws. And that leads to all sorts of cycles of poverty and criminality that are really unnecessary. And these are nonviolent offenders that are most of the time being targeted. And it makes it difficult to get an education and to get employment. You know, these are just some of the things that we have to deal with with marijuana prohibition in this country.

Now, when you take that on a global level and you look at the fact that the United States, through, you know, foreign aid and through various, you know, like, arms packages, basically exports the war on drugs to other countries, and at great cost to them, then you really see a need to reevaluate this issue.

And I think that a lot of Latin American countries are sick and tired of their countries being the battlegrounds to try to prevent something that is not going away. The flow of these substances is not going to end anytime soon. And by using paramilitary tactics and the old style of war on drugs that we’ve been used to, to try and continue to do this is really just going to result in more failures.

NOOR: Morgan Fox, thank you so much for joining us.

FOX: Thanks for having me.

As communications manager, Morgan Fox handles the day-to-day media needs of MPP’s reform efforts on the state and federal levels. In addition to interviews and providing information to reporters, Morgan is a frequent contributor to the MPP blog and has authored articles that have been published in news outlets nationwide. A native of Cleveland, Ohio,…