A constitutional amendment in Brazil has passed a key committee in the legislature and, if passed, would criminalize all abortions, even in cases of rape and risk to the mother's life. Mike Fox reports from Brazil

A constitutional amendment in Brazil has passed a key committee in the legislature and, if passed, would criminalize all abortions, even in cases of rape and risk to the mother's life. Mike Fox reports from Brazil 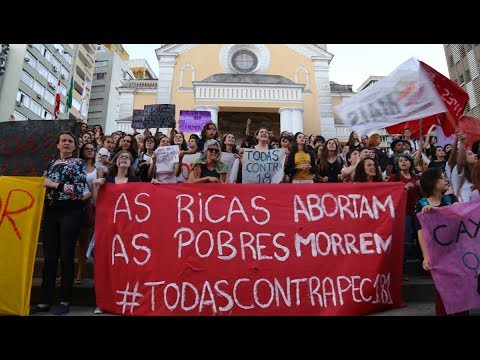 MIKE FOX: Thousands of women protested in major cities across Brazil, Monday, against a congressional push to criminalize abortion. In the capital of the Southern state of Santa Catarina, hundreds turned out. They beat drums, chanted and danced.

TATIANA ZIMMERMAN: “Our rights are being rolled back. What we are fighting for is women’s dignity, because this move puts our reproductive functions above our dignity and that is unacceptable. We’re protesting against this measure. It can’t go forward.”

MIKE FOX: Abortion is currently legal in cases of rape, high risk to the pregnant mother, or if the fetus suffers from anencephaly. But last Wednesday, a special congressional commission approved a proposed constitutional amendment that could — if passed by both Congress and Senate — criminalize abortion in Brazil. It does this by constitutionally changing the definition of “life.”

The amendment is known as PEC 181/2015. It actually extends maternity leave for mothers of premature babies. But lawmakers modified the text to redefine life from inception, instead of birth. The amendment was approved 18-1 by all of the men on the commission. The only woman voted against it.

The move has been applauded by the evangelical congressional caucus, which pushed for the change. But feminist and women’s organizations are calling it a Trojan horse to alter the definition of birth, and in turn criminalize abortion.

CROWD: [Translation] I won’t accept it. Abortion is my right.

MIKE FOX: Underlining the move is a culture war playing out across Brazil, which in many ways mirrors the United States. Right-wing movements have grown in recent years and become emboldened. Their protests recently forced the closure of an LGBT art installation in Porto Alegre and even rallied against U.S. gender theorist Judith Butler during her trip to Brazil. Afro-Brazilian religious communities have also been attacked.

Glaucia de Oliveria Assis is a member of the Santa Catarina State University’s Research Group on Gender and Family Relations. She believes the impeachment of president Dilma Rousseff opened the door for these movements to flourish.

GLAUCIA DE OLIVERIA ASSIS: [Translation] The debate over corruption and the political crisis brought with it a conservative agenda that had not existed in the country for a long time. That doesn’t mean it didn’t exist. It did, but it didn’t have legitimacy. When you question a democratically-elected government and oust this government in a coup, you allow other social forces to strengthen and acquire legitimacy.

MIKE FOX: PEC 181 is now headed to another commission and then to a pair of votes in the lower house. Speaker Rodrigo Maia has come out against the amendment. But in Brazilian politics anything is always up for grabs.

Meanwhile, thousands of women across the country are promising to keep the pressure on.

CROWD: [Translation] If you push, the amendment will fall.