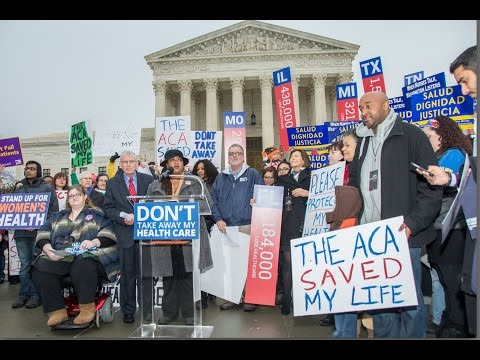 In a 6-3 vote, the U.S. Supreme Court rejected a challenge to Obamacare on Thursday. The justices said consumers qualify for a subsidy that lowers the cost of premiums whether they buy their coverage through federal or state exchanges. Chief Justice John Roberts wrote the majority opinion, stating: “Congress passed the Affordable Care Act to improve health insurance markets, not to destroy them. If at all possible, we must interpret the act in a way that is consistent with the former and avoids the latter.”

Now joining us to get into all of this is our guest Dr. Margaret Flowers. Margaret is a pediatrician in the Baltimore area and co-chair of the Maryland chapter of Physicians for a National Health Program.

Thanks for joining us, Margaret.

DR. MARGARET FLOWERS, PHYSICIANS FOR A NATIONAL HEALTH PROGRAM: Thank you for having me, Jessica.

DESVARIEUX: So Margaret, do you see this court decision as a real victory for working people?

FLOWERS: I see it as a victory for those more than 6 million people in 34 states who would have lost the subsidies to their coverage and would have seen their premiums rise by 300 to more than 600 percent without it, that the fact that they won’t lose their healthcare is a [plus.]

DESVARIEUX: But Margaret, I know that you and your organization, you are in favor of a single-payer system and your major critiques is that there are skyrocketing costs for everyday folks in terms of premiums, deductibles, co-pays. Can you just explain how the system that Obamacare has set up has accelerated those expenditures for everyday working folks?

FLOWERS: Thank you. Well, it continues to be a market-based, private insurance-driven system, and private insurers in the United States really have profit as their bottom line. So they do whatever they can in order to enhance that profit. Raising premiums, co-pays, deductibles, restricting access to health professionals or to medications.

The competition that was hoped would emerge from the Affordable Care Act has not happened. And in fact in the federal health exchanges almost 60 percent of them only have a choice of one or two health insurers. So when they can dominate the market like that they’re able to charge higher prices.

DESVARIEUX: But of course you know President Obama came out defending Obamacare once again, and he pointed out to some specific examples of how the program is working. Let’s take a look.

PRESIDENT BARACK OBAMA: If you’re a parent, you can keep your kids on your plan till they turn 26, something that has covered millions of young people so far. That’s because of this law. If you’re a senior or an American with a disability, this law gives you discounts on your prescriptions, something that has saved 9 million Americans an average of $1600 so far. If you’re a woman, you can’t be charged more than anybody else. Even if you’ve had cancer, or your husband had heart disease, or just because you’re a woman.

DESVARIEUX: So Margaret, we just heard the President lay out his examples of how Obamacare is really working for working families. Isn’t there something to be said about those achievements?

When it comes to pre-existing conditions, while insurance companies are not able to exclude patients or policy holders on the basis of pre-existing conditions, what they’ve done on the flip side is to restrict access to providers by creating narrow and ultra-narrow networks that don’t cover many of the major health centers or the specialty types of doctors that patients would need when they actually have a serious health problem. That drives patients to have to go outside of their network, where they bear 100 percent of the cost of their care.

So we continue to see these healthcare barriers. And of course it’s great that women, that we reduce the disparity between healthcare costs for men and women. But we could do that as well under a single-payer system, and under single-payer we wouldn’t be leaving 35 million people in America completely out of the system, and another 30 or 40 million people who continue to face financial barriers to care.

So the reason that we oppose the Affordable Care Act, while we don’t support taking anything away from people, is because it just is not a solution that will ever be universal or affordable for everyone.

DESVARIEUX: Let’s talk about another group that is opposing the Affordable Care Act. That’s Republicans, of course. And they were not happy with the court’s decision. Sen. Lindsey Graham, he took the Senate floor today saying that healthcare would be the number one issue in the elections in 2016.

Margaret, do you see that we need to reform the system that we currently have under Obamacare, or do we need to completely overturn it like Republicans want? And would your organization be in support of sort of working together with conservatives to get this repealed?

FLOWERS: When it comes to the Republican approach to healthcare we just completely differ. They don’t have a real, viable solution other than just completely opening it up to the market, which is where we’re headed. And we ought to remind ourselves that the basis of the Affordable Care Act came out of a conservative think tank and was first passed by a Republican governor in Massachusetts. So what we’re seeing is politicking instead of really talking about the policy issues.

What we want to see, and the fastest way we can do this, is just to completely expand Medicare to the entire population. A publicly financed Medicare for all, and then work to improve that system so it has more comprehensive benefits. That’s the fastest way to solve this problem. We’ll cover everybody and we’ll control healthcare costs, and people won’t face out-of-pocket financial barriers to getting the care that they need.

DESVARIEUX: But Margaret, could there be a way that we can sort of work with this idea that private health insurance companies, they’re not going anywhere in America. They’re sort of a staple, a huge Goliath in our world right now. Is there a way that we could work with a different type of model? Let’s take for example Switzerland. 99.5 percent of all Swiss citizens are covered. The government subsidizes healthcare for poor people on sort of a graduated basis with the goal being that individuals would not spend more than 10 percent of their income. And according to them they only spent about 2.7 percent of their GDP on healthcare, and here in the United States we’re spending about 7.4 percent of GDP. So this could eventually save us money. Would you be in favor of eventually moving towards a system like that?

FLOWERS: Yeah, I would not be in favor of that. I think that what we’re talking about between the United States and Switzerland are completely different situations. Switzerland, private health insurance is actually designed and has been for a long time to provide coverage for actual healthcare. The citizens of Switzerland have a much higher income, they have much better social support for their citizens. So it’s completely different than here in the United States, where our private health insurers have as their bottom line profit, and they don’t in fact care about the health of their policy holders. And so we’ve tried for decades now to regulate this industry, and what we see is every time we try they do an [en rund] around it, and healthcare costs continue to go up, and people continue to go without the healthcare that they need.

So again, the fastest way we can do this is to join the many other industrialized nations in the world who have gone to some form of a publicly financed, universal, single-payer type of healthcare system.

DESVARIEUX: All right. Dr. Margaret Flowers, always a pleasure having you on.

FLOWERS: Thank you for having me, Jessica.

Dr. Margaret Flowers is a pediatrician in the Baltimore area and a co-chair of the Maryland chapter of Physicians for a National Health Program (PNHP). She is also a Co-Director of PopularResistance.org and It’s Our Economy. Flowers is currently running as a Green Party candidate for US Senate in the state of Maryland.