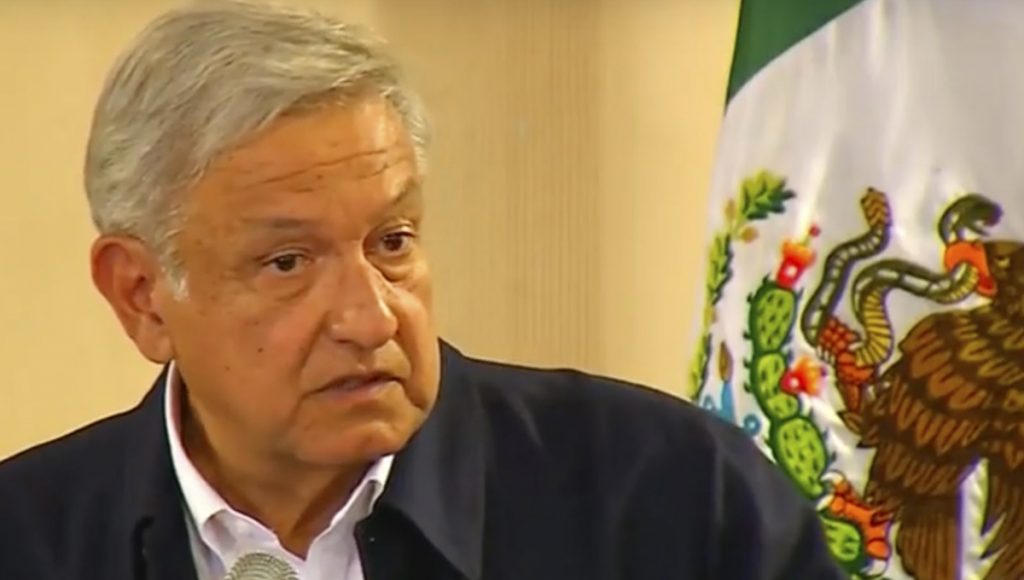 Mexico’s presidential campaign is in full gear at the moment, with the elections scheduled for July 1. Leftist candidate Andres Manuel Lopez Obrador, also known by his initials, AMLO, remains the frontrunner, with a 20-point lead in many opinion polls. However, as Election Day approaches, Mexico’s business class and the financial sector seem to be showing signs of nervousness. Two weeks ago, the business press was full of headlines warning that Mexico’s currency, the peso, is devaluing because of the prospect that AMLO might win the election. Meanwhile, crime and murders of local political candidates are also making headlines. Over 90 local candidates for office have been killed thus far AMLO addressed the issue during a forum on Tuesday. Here’s what he said.

SHARMINI PERIES: Joining me now to discuss Mexico’s presidential campaign is John Ackerman. John is a professor at National Autonomous University of Mexico, and editor in chief of the Mexican Law Review, and a columnist for the publication La Jornada and Proceso. Good to have you back with us, John.

JOHN ACKERMAN: Thank you, Sharmini. A pleasure, as always.

SHARMINI PERIES: All right, John. Let’s start with AMLO’s plan to address violence in Mexico. He said he would invite the Pope. Very good political move. And that he would invite other experts and have conversations with the families that are affected by all of this violence. That sounds like a good beginning, but certainly not a plan to address the magnitude of the problem in Mexico. Apparently 2017 was the most violent year thus far now, with 30000 murders in one year. Now, according to Bloomberg, who has looked into this issue, they say that the rise in homicides can be blamed partly on the arrest of Joaquin El Chapo Guzman, the head of the powerful Sinaloa cartel, who was extradited to the U.S., and now that has spurred a number, or I guess more than a number, if, you know, some 23000 people have been killed in turf wars. So tell us about the magnitude of the problem we are dealing with in Mexico, and what the main candidates are saying about how to address the problem.

JOHN ACKERMAN: 2017 broke all the records. Over 30000 homicides last year, as you mentioned. With every new decapitation, they call it, the strategy of grabbing the narco leaders, or in this case extradited to the United States, the increase in violence is seen as somehow an indication of success. So something needs to change structurally. It’s not just a question of grabbing the leaders. We need to have a bottom-up strategy, not just a top-down strategy, and that’s what Lopez Obrador is talking about.

But the first step is for society to trust and to work with its government. And in order for that to happen, government needs to reach out to the people and work with them, and break with this very authoritarian, top-down, militarized, Washington-directed strategy which has failed the last 10 years. That’s what’s on the table, that’s what Lopez Obrador is trying to put on the table. And I think, you know, very humbly, opening things up for the experts to come in. Realizing that he’s not an expert on this particular topic, but that he does have a very good sense of what the Mexican people need and want.

SHARMINI PERIES: All right, John. Now, this is, as we’ve all identified, a huge problem. What are the other candidates saying about how to address violence in Mexico?

JOHN ACKERMAN: Well, so for instance you’ve got Jose Antonio Meade. He’s the PRI candidacy, the ruling, the sitting government of Pena Nieto has been covering the airwaves with his, you know, 30 second spots, which say Lopez Obrador wants to cut deals with the criminals. We want to put them into jail. That’s his central message, that somehow this is being soft on crime, Lopez Obrador’s strategies. We need to get tougher on crime and throw them into jail. Mexicans kind of laugh at these announcements, or many Mexicans, because, you know, of course, Mead himself is very much tied up with these networks of, you know, criminal governments. Because you have to understand that these criminal networks, these narco networks, don’t operate alone. That’s why they are killing politicians, because they need protection from local government, but also state-level and federal government. And Mead is very much caught up in this network of complicity.

And so it’s not really believable, this strategy. Yeah, of course you need to use the police. I would say not the military, this militarized strategy has been very much mistaken the last ten years. You know, the state has a role in [coercion], to bring people to jail. But in general that’s what’s on the table, the distinction between trying to transit towards a different system, or continuing with the same punitive system. Anaya himself, the right-wing Christian Democratic candidate is, you know, barking up the same tree. Saying that, you know, Lopez Obrador is somehow soft, we need to be tough, and that’s how we’ll resolve the crime issue.

SHARMINI PERIES: All right, John, let’s get to the issue of violence and how it’s impacting the elections. Now, on Wednesday, 80 candidates in the state of Chihuahua announced that they would actually withdraw their candidacies in protest against the slew of murders and attacks against local candidates. Now, over 90 local candidates for office have been killed thus far. So tell us how the government is addressing this problem, and how it’s affecting the democratic values in this election.

JOHN ACKERMAN: Right. Well, there’s two sides to it. One is the fact that we have this incredible crisis of violence, of homicides throughout the country. And so politicians and candidates are playing on this violent playing field, and are getting caught up in it itself. But the other side is that, you know, the regime the sitting regime of the PRI, allied with the PAN, is afraid. They’re afraid that Lopez Obrador might win. They’re afraid that there might be a new system put into place against corruption in the rule of law, and that they might be judged or investigated due to this new system. And so many of this, particularly electoral violence, the suspicion is that it’s directly provoked, in fact, by other politicians who are afraid of losing power.

And so this is definitely dangerous. In recent days even Lopez Obrador himself has been getting death threats. Even a national journalist, Ricardo Aleman suggested on Twitter that Lopez Obrador, his own followers should knock him out, just like John Lennon, just as happened to John Lennon, he said. And so he was immediately fired, actually, from two or three different media where he works. But due to the incredible social network reaction to that insinuation of assassination of Lopez Obrador. But in general, yes, that’s on one side you have the violence. On the other side you have a strategy of fear. They’re trying to put fear into the Mexican people so that they don’t come out and vote on July 1.

SHARMINI PERIES: All right. Let’s turn now to the issue of AMLO’s relationship with the business class. As I said off the top, the business sector is rather nervous about a left-wing candidate leading in the polls. So tell us about his economic platform, and how the business class is responding to AMLO. And also, Mexico has had a nationalized oil industry since the 1930s under state-owned companies like Pemex. Now, how do you think AMLO is going to approach this whole issue of managing the oil industry as well?

JOHN ACKERMAN: OK. There’s a big question. There has, there’s been a recent attack on Lopez Obrador from, some people say that business class, but it’s actually not the business class. It’s a very specific sector of, I would call them, oligarchs. So the last 20-30 years of neoliberal policies we’ve had a redistribution of wealth toward the top, and you know, 16 families who are owners of, you know, half of Mexico’s wealth. These guys, who have, who are the sons and daughters of privilege, government support for their businesses are not defending, you know, freedom of, the free market. They’re defending their state protections and privileges, and they have gone directly attacking Lopez Obrador, based on the issue of the airport, he wants to cancel a project, an enormous airport outside of Mexico City. Or not cancel it, but change it to a more cheaper, efficient option. He’s talked about looking at reviewing the petroleum contracts to see if they were given through corrupt deals.

So they’re starting to get nervous, and they are attacking him directly. But actually, once again, just as happened with this journalist case, that attack of a small group has created actually an upswell of support for Lopez Obrador. There has been a lot of support from, for instance, from small and medium-sized businesses have been publishing public communiques in favor of Lopez Obrador. And even plenty of big businessman from Monterrey, from the north, have also come out and said, you know, these guys, these oligarchs don’t represent us. We want an honest and fair government. And that’s how we’re actually going to promote free competition and economic development.

And so that’s where we are right now. Of course, the problem is that the media, the local media, is very close to these oligarchs, and not so much to the other parts of the business class. And so they’ve been presenting the issue to the Mexican people and to the international press as if there was more fundamental conflict between Lopez Obrador and all corporations, or the entire business class of Mexico.

SHARMINI PERIES: All right. John, I thank you so much for joining us today. We look forward to you next week.

JOHN ACKERMAN: Wonderful to talk to you, as always, Sharmini. We’ll keep in touch.