Deported workers, families and activists rally outside US embassy demanding amnesty and reunification of broken families

Deported workers, families and activists rally outside US embassy demanding amnesty and reunification of broken families 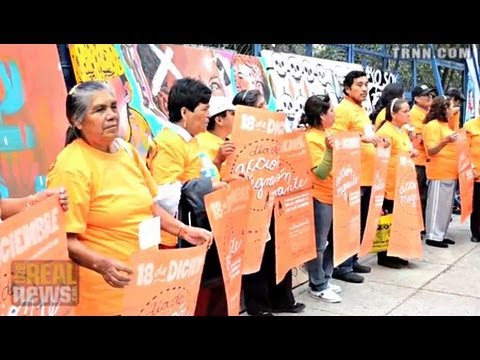 ANDALUSIA KNOLL, PRODUCER, TRNN: On his first visit to Latin America since he started his second term, President Obama met with new Mexican President Enrique Peña Nieto to discuss the economy, trade relations, and security. Speaking at the National Anthropology Museum, he stated that the U.S. is a nation of immigrants and needs to pursue reform.

BARACK OBAMA, U.S. PRESIDENT: The immigration system we have in the United States right now doesn’t reflect our values. It separates families when we should be reuniting them. It’s led millions of people to live in the shadows. It deprives us of the talents of so many young people, even though we know that immigrants have always been the engine of our economy, starting some of our greatest companies and pioneering new industries.

KNOLL: While Obama spoke about his desire for reform, hundreds of family members of Mexican immigrants, deportees, and activists gathered in front of the U.S. embassy, demanding an end to deportations and advocating for immigration reform with the human rights framework. Margarita Torres, who was recently deported from the United States and spoke at the march:

MARGARITA TORRES, ACCIÓN MIGRANTE (SUBTITLED TRANSL.): I was in the United States for 20 years working in the fields, in the fields so I could sustain my family. But one day, immigration arrived at my house to deceive me. They told me that they were the police. When we came home from work, they arrested me and my son. They sent me back to my country, Mexico. And it’s unfair, because my family stayed there. I had to bring my 10-year-old daughter with me.

I am sending this letter so that Barack Obama will see how he destroys our families, how he destroyed my family, not just my family, but thousands upon thousands of families from all over the world–it’s not fair–just because we look for something better for our children.

KNOLL: Torres was not alone in sharing her story of being separated from her family. Veronica Solis was an undocumented immigrant for over a decade in San Francisco and recently returned to Mexico to try to adjust her migration status. Addressing the crowd, she stated that Obama’s immigration policies were even worse than Bush’s.

VERONICA SOLIS, COMMUNITY ACTIVIST: We–actually, I felt that the Latino community was really fooled by his campaign, pretending that he understands our situation. And he seems to me–in fact, I believe that–he seems to me that he got all the information on the needs that we have there. And then he started. And the whole first term, nothing happened regarding immigration.

Well, we see that after a while, then the Secure Communities comes. They [incompr.] for an ICE. And even in San Francisco, that it is being said that it’s the century for immigrants, we feel the fear and we hear from firsthand people that were arrested.

KNOLL: [incompr.] facing deportation, many immigrants have options for relief if they have citizen children, are married, or have lived in the U.S. for more than ten years. However, in order to fight their cases, they have to do so from within immigrant detention centers, and many opt instead to take voluntary departure so that they won’t be incarcerated. Jose Velasquez took this option after receiving a deportation order for driving without a license in California.

JOSE VELASQUEZ, ACCIÓN MIGRANTE: And it was kind of hard for me that day, because I just barely signed the paper, and I was in Tijuana two hours later. I was being separate on my family. My family–I didn’t even have time to say bye to my family, to my friends, to my town, to my neighborhood. It was something really hard.

KNOLL: Over the past decade, immigration has skyrocketed among Central American populations. An estimated 500,000 people pass through Mexico on their way to the U.S. every year, traveling on freight trains. And it is estimated that 10,000 of them are kidnapped yearly by organized crime.

The protest honored these migrants who are killed during the journey and drew silhouettes representing a group of 72 Central and South American migrants who were killed by the criminal group the Zetas while traveling to the U.S.

Pedro is from Honduras and lived in New York for over seven years, until he was deported. While trying to return to the U.S., he was threatened by organized crime groups who murdered two of his travel mates. He is now under protection orders and participates with Acción Migrante.

PEDRO, DEPORTED HONDURAN IMMIGRANT (SUBTITLED TRANSL.): Lost children, children over there with parents over here, and basically broken families. I am one of them. My family is there. They stayed. I have not seen my son in seven years. By chance one day I saw my son using the internet, and he asked, [English] “Yo, Daddy, when are you going to get back?” I say, “I’m sorry, Son. I can’t right now.” [subtitled transl.] Why? Because I can’t. Why not? I have no response for him.

KNOLL: The current immigration reform legislation being debated by the Senate right now focuses on increasing border security between Mexico and the U.S.

Rodolfo Cordova is an investigator with the nongovernmental organization FUNDAR and says the government’s logic is backwards.

MARCO CASTILLO, MIGRANT FAMILIES POPULAR ASSEMBLY: And today he has a chance to embrace human mobility and the right to have a dream and look for a better life by passing an immediate administrative order to stop all deportations, to support the efforts for a very progressive immigration reform that would include an absolute immediate amnesty for all the more than 10 million families that are being separated throughout the world because they’re currently living and working in the United States.

KNOLL: As U.S. politicians gear up to pass comprehensive immigration reform legislation, Mexican citizens say they will continue to fight for family reunification and human rights for all.