"Alive They Took Them, Alive We Want Them" Mexico rally demand calls for end to forced disappearances

"Alive They Took Them, Alive We Want Them" Mexico rally demand calls for end to forced disappearances 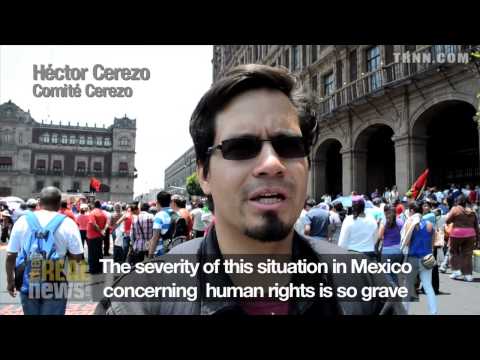 ANDALUSIA KNOLL, TRNN PRODUCER: The last week of May 2013 marked the sixth anniversary of the disappearance of Edmundo Reyes Amaya and Gabriel Alberto Cruz Sánchez in the Mexican state of Oaxaca. These two men were alleged to be members of the guerilla group EPR, which stands for the Popular Revolutionary Army, and were last seen detained by military forces. Civil associations and activist organizations united to organize a week of action to demand clarity around this case and thousands of others, similar situations, where people are disappeared for both political and nonpolitical reasons.

On May 30, several thousand people marched from the Mexican offices of interior affairs to the central plaza of Mexico City.

Nadín Reyes Maldonado is the daughter of Edmundo Reyes and is a founding member of the group Until We Find Them. She spoke out at a protest in in the plaza about the history of forced disappearances that started with the dirty war that the Mexican Government launched against leftist student and guerrilla movements in the 1960s and 70s.

NADÍN REYES MALDONADO, UNTIL WE FIND THEM (SUBTITLED TRANSL.): These are only some of the thousands of the faces of the disappeared that exist in our country. We say as a people that we can’t be indifferent. Wee see that there is a necessity to continue to take to the streets to protest and show the names and faces of our family members. It is these faces and names that the Mexican government wants to delete. Many of them don’t appear in the “official” statistics.

KNOLL: Héctor Cerezo is a member of the Comité Cerezo and former political prisoner. The Comité Cerezo helped organize a people’s permanent tribunal the last week of May 2013 to document cases of forced disappearances and extrajudicial executions in Mexico.

HÉCTOR CEREZO, COMITÉ CEREZO (SUBTITLED TRANSL.): The severity of this situation in Mexico concerning human rights is so grave that international judges one year ago in the pre-audience for the Permanent Peoples’ Tribunal in Ciudad Juarez, when they listened to the testimonies of the victims, they suggested that the term “state terrorism” be used, that the level of forced disappearances and extrajudicial killings is showing that there exists a systematic planned state policy to generate terror in the population for different reasons.

KNOLL: The Mexican government states that they are working diligently on this issue and just created a new investigative unit to search for missing persons. Mexican Attorney General Jesús Murillo Karam said family members of the disapeared have had to confront too much government bureaucracy on top of their suffering.

KNOLL: Human Rights defenders say that this is a step in the right direction and that it will also be bolstered by the recent passage of a victim’s law allowing federal authorities more power in investigating cases.

Isabel Rosales travelled with a delegation from Guerrero to present cases of disappearances from their state at the People’s Permanent Tribunal.

KNOLL: The majority of disappearances occur outside Mexico City, but recently there have been more cases within the capital. Teodulfo Torres has been missing for two months. He is a longtime activist aligned with the Zapatista movement and was a witness to a police launched projectile that severely injured protestor Francisco Kuykendall during the recent presidential inaugaration. Adrian, who didn’t want to give his last name for security reasons, said they presented this case at the Tribunal.

ADRIAN, NAT. CAMPAIGN AGAINST DISAPPEARANCES (SUBTITLED TRANSL.): Why do we say it could be a forced disappearance? Forced disappearances have certain characteristics, which are that they are carried out by the authorities or with the complicity of the authorities. In this case, the case of Teodulfo, the reason: he is the principal witness to the violence against Kuykendall. The only entity who would be interested in his disappearance would be the state.

KNOLL: As activists and family members prepared to launch the week of action, a horrific event occurred at an after-hour club right in a central tourist zone in Mexico City. Twelve young people were abducted, allegedly by armed men, in broad daylight. The mothers of these disappeared youth participated in the protest, including Leticia Ponce.

LETICIA PONCE, MOTHER OF JERZY ESLI ORTÍZ PONCE (SUBTITLED TRANSL.): I am here because there was a kidnapping–I don’t really know–or an abduction of 12 people who were taken from a nightclub in the Zona Rosa that is called Heaven, and one of thsoe people who were taken is my son. He is sixteen years old. That is why I’m here.

KNOLL: In the coming months, human rights defenders and family members of the disappeared will see how this new unit for missing people and the victim’s law function in helping them understand what has happened to their missing loved ones.

Andalusia Knoll is a multimedia journalist and educator hailing from NYC, residing in Mexico City where she reports about immigration and Mexican social movements. She is a frequent contributor to Free Speech Radio News, Toward Freedom, and her work has been featured on Democracy Now! teleSUR truthout and various independent media outlets.

January 8, 2020
Sign Up for Our Newsletter
Help Us Make Real News!