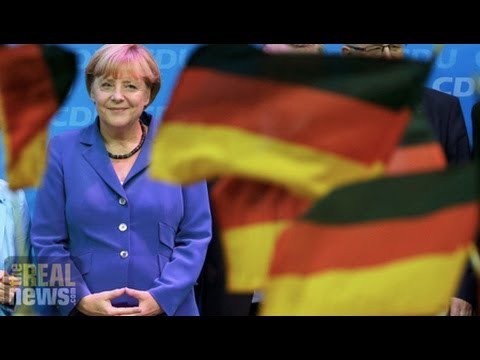 FREDERIK BLAUWHOF, TRNN CORRESPONDENT: The triumphant, the Merkel republic, Angela Merkel triumphs in German election to secure historic third term–the headlines all agree: Angela Merkel’s Christian Democrats are the clear winners of the German elections of Sunday, September 22. With a result of 41.6 percent, the best result since the fall of the Berlin Wall, the CDU/CSU even came close to an absolute majority in parliament.

Backed by relatively good economic figures for the German Republic, Merkel has capitalized on the widespread impression that Merkel has led Germany through the crisis and defends German interests abroad.

ANGELA MERKEL, GERMAN CHANCELLOR: As your cheers show, we can all be happy. This is a superb result. We have proven the Union (CDU/CSU) are catch-all parties. We will do everything to make sure that the next four years will be good for Germany.

BLAUWHOF: At the same time, however, Merkel’s coalition partner, the right-wing liberal FDP, suffered its biggest defeat since 1945. Falling from 14.6 percent to 4.8 percent, the liberals have been voted out of parliament entirely for the first time. So even with the huge show of support for Angela Merkel as chancellor and her Christian Democratic Party, Merkel will have to find a new coalition partner to stay in office.

The opposition, consisting of the social democratic SPD, the socialist Left Party, and the Green Party, now have a slight majority in parliament of 319 to 311 seats for the CDU/CSU. The Social Democrats have done marginally better compared to the last election, rising from 23 percent to 25.7 percent.

The campaign of the SPD, however, has not succeeded in presenting a clear political alternative to the Merkel government. On the one hand, the SPD did make some left-wing election promises, like introducing an EUR 8.50 minimum wage and limiting rent increases. But on the other hand, they continue to support the neoliberal welfare and labor reforms introduced by the red-green government under Gerhard Schröder. In addition, both the Greens and the SPD have consistently supported Merkel’s austerity politics in Europe, giving the impression that there has been no real opposition in Parliament at all. Finally, as the SPD’s preferred coalition with the Greens was widely understood not to achieve a majority, most voters expected the SPD to form a government with Merkel all along. After all, the current chancellor candidate for the SPD, Peer Steinbrück, has already been a finance minister under Merkel from 2005 to 2009. As such, Steinbrück could not convincingly lead a left-leaning election campaign.

All this has had the effect of suggesting that there is no real alternative to Merkel, no matter what party one votes for. So despite a left-of-center parliamentary majority, hardly anyone in Germany believes that there is a chance that the Social Democrats, the Greens, and the socialists would form a joint government. Both the Social Democratic candidate, Steinbrück, as well as the Green Party chairs Trittin and Göring-Eckardt have ruled out a coalition government with the Left Party on the grounds that the Left are no serious coalition partner. The main objections concerned the Left’s opposition to NATO membership and military interventions, as well as so-called unrealistic social demands like universal state pension of EUR 1,050 a month and a EUR 10 minimum wage. The Left remain available for negotiations, depending on the political content, but expect the Social Democrats to form a grand coalition with the Christian Democrats.

Based on the SPD’s tame opposition in the current parliament, a new grand coalition will most likely carry out more or less the same politics as the current government. On paper, there are some programmatic differences between the SPD and CDU, for example in terms of domestic social and energy policy. But in practice, the realpolitik of both parties has been very much compatible. One can therefore expect a new German government to continue the politics of austerity and bank bailouts on the European level while keeping the status quo at home.

This is Frederick Blauwhof reporting from Berlin for The Real News Network.