Over 50 Killed in Egypt As Country Braces for More Violence 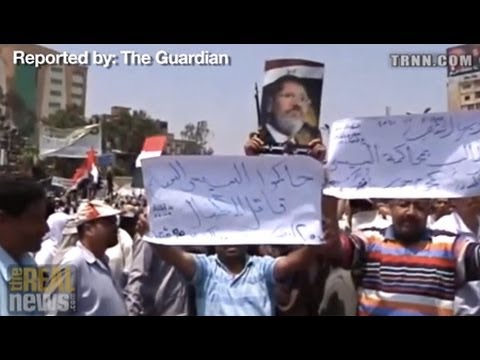 Over 50 are dead in clashes in Egypt that left hundreds injured. Meanwhile, earlier reports that Mohamed ElBaradei had been named interim prime minister have proved to be false.

Now joining us to give us the latest on these developments is Mohamed ElMeshad. He’s an independent journalist based in Cairo, Egypt. He worked for two years for Egypt Independent. And he joins us now from Cairo.

NOOR: So what can you tell us about this latest round of violence that took place earlier today in Cairo?

ELMESHAD: Well, the latest round of violence in Cairo has some very, very worrying signs attached to it. Basically, after morning prayer, which is about 3 a.m., 3:15 a.m., [incompr.] people living around the area where there were protests, pro-Morsi protests, there were clashes between military and protesters. And the–well, it included military–the eyewitnesses I heard at the time said that they saw soldiers shooting at civilians.

Of course, in the hours that followed it became a lot more–the stories increased and there was a lot more of a conflicted situation, where you had the soldiers claiming that there were protesters who tried to climb the walls of the Presidential Guard Club and that they shot back at them in self-defense. The Interior Ministry and police were also involved and implicated. Reports came out that some of the protesters were armed.

So it’s turned into a big, divisive issue. The media’s going crazy trying to report, trying to get to the bottom of it. However, there are a lot of anti-Morsi stations claiming that this is just a manifestation of the violence and crime pro-Morsi Islamist camp, whereas a lot of the other–a lot of the protesters are saying that this is in fact a symptom of the military fascism or military dictatorship that they say will come, and will come at their expense.

NOOR: So in response, the Muslim Brotherhood has called for an uprising, intifada against the military rule. Can you tell us about–can you talk about what the mood is on the ground? Are people afraid of more violence, of this continuing to possibly spiral out of control?

ELMESHAD: I mean, from the protesters’ camp, I spent the last two days, actually, scoping out the pro-Morsi camp, and I’ll be honest. From my end, it seemed like a very peaceful–I mean, the outward manifestations of it was very peaceful. There was some violent rhetoric, and, of course, they consider the military situation, what happened to be a coup and nothing but a coup and a completely illegitimate one. So now that they, according to them, have been attacked for no reason during their prayers, they believe that what they feared, which was a recurrence of the Nasser era [incompr.] of the Nasser era 1954 sort of inquisition of the Islamist statement, they see this as sort of round two or a recurrence of that.

As for the anti-Morsi camps, many of them–while many of them actually are sympathizing, given that there are more than 50 dead, and a lot of them understand that the military do–you know, have been involved in the past in unwise clashes with the people, they’re afraid that this could escalate. And there are others who disbelieve that this will be a call to arms for Islamist groups who do espouse a jihadist rhetoric around the country.

NOOR: Now, did this massacre earlier today, do you feel that might change the opinions or the views of some of the anti-Morsi protesters? We saw reports of massive crowds coming out in support of the military, with the military jets flying overhead dropping flags on protesters. Could this massacre, as it’s being described in some media outlets, could this kind of possibly change this game right now?

ELMESHAD: Even many who believe that the protests were–that the clashes were incited by some violent pro-Morsi protesters, the response was completely disproportionate in their opinion. And there is a history of violence, like I was saying, from the police especially against protesters, and now the military.

The Ministry of Defense, along with the Ministry of Interior, just released a press conference, the Ministry of the Interior basically claiming that they are now absolved from any accusations that they were involved in killing protesters, which is completely ludicrous, that anyone who was on the ground during the 25 January revolution and saw what police were doing.

So a lot of protesters are now being reminded very potently that what we’re dealing with is a police apparatus that has not changed. Their methods haven’t changed, obviously, a military that maybe has not wisened up to how it should deal with protesters on the streets.

On the other hand, in Egypt you always have a reluctancy to distrust the military, because it is by almost all accounts and what many people believe is that it’s a army of the people. So, many of the protesters who were engaged in specifically anti-military rule rhetoric during the Supreme Council of the Armed Forces tenure ruling the country, they are reminded of that time, and they are starting to revive some of that rhetoric.

On the other hand, many are actually scared enough of what they see as Islamist violence, and Islamist violent tendencies that they are ready to sort of succomb to the fear and acknowledging the need for the military to rule with an iron fist.

NOOR: And, Mohamed, this weekend there was also speculation and reports that Mohamed ElBaradei, opposition figure in Egypt, he had been named prime minister. Those reports turned out to be premature. Can you give us the latest on what we know about if Baradei will become the next prime minister or not?

ELMESHAD: Sure. Well, one of the parties or one of the political groups that were involved in the declaration, the minister of defense’s declaration of Morsi’s ousting and the formation of what’s supposed to be a consensus government was the Salafist Nour Party. Now, they play a very important function as the main political Islamist party that was involved in forming this new–the roadmap forward. Now, the appointment or the attempt to appoint Baradei as the prime minister was not to their liking, and they came out and opposed it. And so if government, if the current government lets that go, if the current powers that be doesn’t listen to them, then they lose this main faction in this new roadmap forward.

So there were a few other names proposed. One of them, Ziad Bahaa-Eldin, he used to be a member of the Investment Authority. I think he was one of the executives of it. He’s–however, he is a staunch liberal. The Nour party opposed that as well. There are a few other names, including former prime minister Hegazi who were put forth. But so far, I mean, Hegazi refused the appointment, according to him. And we do not know who will be called the new prime minister. There are still so many speculations. You have to remember that whatever Baradei’s actual history is, there is a stigma attached to him that many–that no matter what the reality of his history and the reality of his political stances are cannot be shook.

NOOR: So as far as the revolutionary protesters on the ground in Egypt right now, what kind of actions, what kind of planning are they doing? Are they trying to plan any actions or further protests? Talk about the mood and what people feel like might be the next steps.

ELMESHAD: That’s very premature to say, because many of the–for example, Tamarod, the steering group, the group that was the spark plug for this, the 30 June revolution, they’re calling for more street presence and they’re calling for continuous just occupation of public spaces. On the other hand, a lot of other groups are trying to reshuffle their cards, seeing exactly where they stand vis-à-vis the military and vis-à-vis the Interior Ministry, vis-à-vis this roadmap forward. People are starting to realize that the pro-Morsi camps are not–perhaps they’re not ready to step down and perhaps if a sense of reconciliation and true consensus that involves them isn’t put forward, then it’ll just vote for a violent next few months, perhaps longer.

So it’s a day, it’s a few hours of really finding out, reshuffling and trying to figure out what’s the best path forward. And no one has put forth a new kind of roadmap–I don’t want to say roadmap again–but in light of yesterday’s clashes.

NOOR: Thank you so much for joining us, Mohamed.