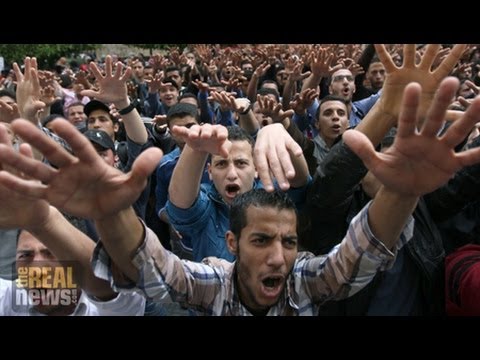 Five hundred and twenty-nine Muslim Brotherhood members were sentenced to death for the murder of a police officer and attacking a police station in Egypt. The event took place a month after the military overthrew former Egyptian president Morsi, who, by the way, still remains on trial.

Amnesty International has called the ruling “grotesque”, and the decision is seen as an attempt to suppress opposition to military rule, as well as clear the way for an expected presidential bid by army chief el-Sisi.

Now joining us to discuss the latest developments is our guest, Mohamed Elmeshad. He’s an independent journalist who wrote for Egypt Independent for two years. And he joins us now from London.

Thank you for being with us, Mohamed.

DESVARIEUX: So, Mohamed, tell us about the court ruling and how you think it will affect the political climate in Egypt.

ELMESHAD: Well, the court ruling is–I mean, simply it’s the largest sort of mass ruling of, you know, mass conviction for murder, which entails execution, in the modern history of Egypt. I mean, it happened over–apparently, it happened over just two court sessions, where the first one was very short. The second one is where they gave the ruling. Of course, for 528 or 545 total people on trial, I mean, it’s impossible for them to have [incompr.] gone through complete due process.

What we know so far is that these people, they may or may not have been involved in some altercations with police at Matay Police Station in Minya, where one officer was killed. And because of that, they were all convicted of murder, and 528 of them were given death sentences.

Now, we must note that only 154 of them were actually there, and the rest were absentee. So, according to Egyptian law, if the ones who were absent show up in court, then this ruling is nul for them. But fact remains: 528 people were sentenced in just two sessions to death for one death, while police were acquitted just a couple of weeks ago over 37 murders under their hands in a police van. Only one person was given any sort of conviction, and it was ten years. So this raises many questions. It’s a lot of people across the political divide in Egypt are very upset. They have no clue how this happened, how such a trial could happen so quickly, while we still have tens and tens of police officers on trial for the deaths of over 1,000 people over the three-year period during the revolution.

DESVARIEUX: Yes. And the U.S. State Department is also questioning the validity of the process. I just want to point to a quotation that came out of an AFP report that said, quoted one of the State Department officials saying, while appeals are possible, it simply does not seem possible that a fair review of evidence and testimony consistent with international standards could be accomplished with over 529 defendants after a two-day trial. So we also know that John Kerry has come out saying that he essentially wants to resume a relationship economically with Egypt in terms of aid. So where do you think this is going to affect the relationship between the U.S. and Egypt? How will it likely weaken it, if it will at all?

ELMESHAD: I mean, if any U.S. senator or congressman wants to bring up up this subject and ask for the U.S. to stop funding or to giving any sort of aid to Egypt, this is now their prime–this could be their prime evidence of a lack of basic human rights in Egypt. The U.S. State Department, Amnesty, Egyptian political parties, all said exactly–all said things consistent with the quote that you mentioned, that it’s impossible that any due process could have happened.

And the fact that it happened so quickly and is being broadcast and is–right now, I mean, when a death sentence is given–or when a conviction for murder is given, the grand mufti of Egypt then has to actually hand the death sentence, which would be April 28. There will be appeals, of course.

But, I mean, it’s not inconceivable that the U.S. would stop giving aid or would have a hard time justifying aid to the U.S. Congress after such a ruling.

DESVARIEUX: We’ve also seen a diplomatic fight between Qatar and Saudi Arabia at the beginning of March over Qatar’s support for the Muslim Brotherhood. Do you think that this court ruling is a political move by the Egyptian military to forge closer ties with Saudis?

ELMESHAD: This court ruling, I mean, if you want to read into it politically, it could go in any different direction. And I spoke to academics and lawyers, actually, today, and, I mean, the just general theorization of what’s happening or what this is, given that it’s so unusual and so harsh and so, I mean, unreasonable by all accounts is that perhaps it’s paving–perhaps it’s a show of force. Of course, an officer did that when he arrested over 1,200 Muslim Brotherhood members, some say more, and the only mass execution that happened after such a ruling included six Muslim Brotherhood leaders. This one includes many leaders. Some people thought falsely that it included the actual supreme guide of the Muslim Brotherhood, who’s from that same governorate, but it didn’t. Some say that perhaps this will pave the way for Sisi’s first presidential pardon, but that’s sort of on the outskirts of the potential analysis.

The actual ruling, it can’t be taken in an international context, I don’t think, because what does Saudi Arabia or Qatar have to gain from a ruling that affects the low-ranking members from the Muslim Brotherhood, and it could potentially have great, like, public opinion backlashes. It doesn’t take a genius to think that this might not be in the favor of anyone who’s anti-Brotherhood but wants to portray an image of being with basic human rights.

The Qatar and Saudi issue, it’s much larger than this. This court ruling will have extreme–I mean–. [clears throat] I’m sorry. This court ruling will resonate deeply within Egypt before it even reaches the international level. I doubt Qatar–or I doubt Saudi Arabia would try and defend such a ruling. So I doubt they’ll use this as–I doubt they’ll take any sort of encouragement from this, that the current government’s trying to pander to them.

This will not help Sisi in any way in the time when–if he will run for presidency, he does need a certain amount of public support. It’s not a given that he’ll have 100 percent of the support. And this is something that is dividing opinion in Egypt. So all of these analyses don’t hold water when you’re thinking of the basic reality of that. This isn’t something that will be universally seen, even by the supporters of the current government, as a strong move against the Muslim Brotherhood.

DESVARIEUX: Alright. Mohamed Elmeshad, we’ll certainly be keeping a close eye on Egypt, especially ahead of the presidential election on April 1. Thank you so much for joining us.