"There will be other wars" 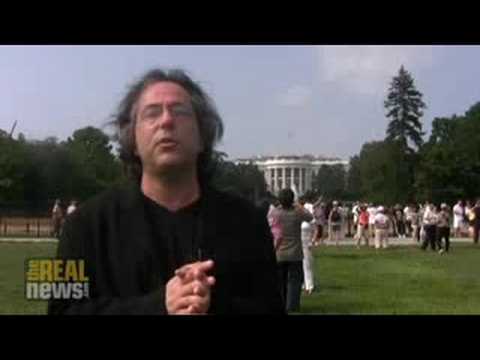 SEN. JOHN MCCAIN, US PRESIDENTIAL CANDIDATE (R): People like you who believe like you do said the surge would

MCCAIN: The strategy in Iraq, called the surge never succeed. It is succeeding, and I’ve been there, and I’ve seen it with my very own eyes., has succeeded.

MCCAIN: The surge has succeeded.

PEPE ESCOBAR, SENIOR ANALYST: This is John McCain’s "mission accomplished." "The surge has succeeded" is John McCain’s whole presidential campaign strategy. McCain now says the surge has succeeded, just like he said that the Iraq War had succeeded. Problem is the McCain campaign claims that McCain has always been a critic of Bush’s war in Iraq. Was he? Here’s McCain before the invasion.

MCCAIN: I believe that the success will be fairly easy.

MCCAIN: I believe that we can win an overwhelming victory in a very short period of time.

ESCOBAR: Way back in March 18, 2003, Fox News’ Bill O’Reilly asked McCain, would he have done anything different during the run-up to the war in Iraq if he had been president? McCain said no, nothing. "The president has handled this," he said, "skillfully." And this is McCain in June 2003.

MCCAIN: Well, then, why was there a banner that said "Mission Accomplished" on the aircraft carrier? Conflict, the major conflict, is over.

ESCOBAR: McCain started to hedge his bets against Bush in August 2003, when he went to Iraq and saw that the conflict was far from over. For the next three and a half years, his message was there were enough US troops on the ground. But he still supported Bush. A February 20, 2007, story in Salon.com finally showed what McCain was doing: he was hedging his position on Iraq, and then the surge, to maximize any political gain in case anything went wrong.

MCCAIN: I’m very nervous about this new strategy. I’m not sure, in fact I’m very doubtful, we have enough troops.

ESCOBAR: And that explains his support for a strategic objective—stay the course—and criticism of tactics—we need more troops. Talking at the very conservative American Enterprise Institute, McCain complained that Bush was sending the minimum number of surge troops to Baghdad. But, anyway, he was convinced that the plan would work, and this when polls at the time showed that most Americans were against the surge. By the end of 2007, the surge had become the central front of McCain’s campaign. McCain himself stressed it: the presidential election was all about the surge.

MCCAIN: So, my friends, I just want to say I know how to defeat our enemy. I know how to stay on offense. I know what it requires to win this titanic, transcendent struggle against radical Islamic extremists. I know what we need to do, and I know how to do it. And I know that we’ve got to continue the strategy and not set a date for defeat as the Democrats continue to try to do. I’m the only one that did that. Ask them. And that’s what this election is all about.

ESCOBAR: All this allowed McCain to brand himself as the real agent of change we can believe in.

MCCAIN: I have been an agent of change. I’m proud to have been one of those who played a key role in bringing about one of the most important changes in recent years, and that was the change in strategy from a failing strategy in Iraq pursued by Secretary Rumsfeld.

ESCOBAR: So how does the McCain campaign package this important change, the surge? According to the McCain campaign narrative, the surge has succeeded because of less American deaths and less Iraqi deaths compared to the horrifying second half of 2006 and the first half of 2007, after the bombing of the Askariya Shrine in Samarra in February 2006. And that was the catalyst for what became a de facto Sunni-Shiite civil war in Iraq. The McCain campaign seems to forget that today the daily carnage in Iraq remains at the level of 2005, and this was the year that most Americans turned against the war. The surge was based on British and French colonialist tactics and practices: you launch your military power against a guerrilla in a very small area and you try to win local support. The surge brought the US troop level to what it was in late 2005. Iraq has a population of roughly 27 million—only 30,000 actual US troops doesn’t make a lot of difference. Then there’s the Anbar Awakening, when Sunni Arab tribes in Anbar province, in Diyala, roughly 200 sheiks, they postponed guerrilla warfare for the immediate objective of expelling al-Qaeda from the region, alongside US. This started to happen by September 2006, way before the surge. The McCain narrative forgets the crucial role of Saudi Arabia in Iraq. Saudi Arabia used cultural, linguistic, tribal ties and a lot of money to persuade the ["doo-my-YEEN"] tribe to fight al-Qaeda. After all, al-Qaeda wants to bring down the House of Saud in Saudi Arabia. General Petraeus’ counterinsurgency plan for Iraq also included a very clever gambit of paying protection money to Sunni tribal leaders. Even The Sunday Times, controlled by Rupert Murdoch, was forced to acknowledge it. In a September 9, 2007, story, the newspaper mentions one sheik in a town south of Baghdad that was given $38,000 and promised a further $189,000 over three months to drive al-Qaeda fighters from a nearby camp. Once again, this began months before the surge. Iran, meanwhile, had been training and advising Shiite militias for years, especially the Badr Organization, the armed wing of the Supreme Islamic Council of Iraq, which is part of the Baghdad government. The Iranian Revolutionary Guard Corps, the IRGC, which Washington brands as a terrorist organization, they brokered ceasefires, not only between Shiite militias, [but] between the Sadrists and new Iraqi army, which is mostly Shiite. Thus both Saudi Arabia and Iran were crucial in bringing down the violence in Iraq. The surge has nothing to do with Anbar province as the McCain campaign claims. It began as a US offensive against the Sunni Arabs in Baghdad, Sunni guerrillas. Shiite militias saw the writing on the wall, and then they accelerated the ethnic cleansing of whole neighborhoods in Baghdad. This is what I saw in Baghdad myself, in the Red Zone, unembedded, in the spring of 2007, right in the middle of the surge. So what the surge did was to facilitate the expulsion of hundreds of thousands of Sunni Arabs out of Baghdad. The violence obviously had to diminish once mixed neighborhoods in Baghdad were slowly ethnically cleansed. And then they became monochromatic, protected by local militias fighting among themselves. Baghdad was segregated, divided by walls erected by Americans. It used to be a 65 percent Sunni city; now it’s 75 percent Shiite. Obviously, under these circumstances the Sunni Arab anti-occupation guerrillas, they were forced to rethink their strategy. The lull in the violence is also explained by the Shiite Mahdi Army of Muqtada al-Sadr striking a ceasefire with US and Iraqi troops in September 2007. After all, Baghdad by that time had been turned into a Shiite city. General Petraeus apparently tracked all this with his elaborate "Ethno-Sectarian Violence" maps. But other Pentagon maps, they told the real story. In the Petraeus map, which he’s shown to the Senate, Baghdad’s neighborhood is static. Their composition doesn’t change. This Pentagon map shows that in July 2006 most of Baghdad was light brown mixed neighborhoods. By July 2007, however, most of Baghdad was large swathes of dark green, 75-percent-plus Shiite, and blue, 75-percent-plus Sunni. As Professor Juan Cole wrote in his influential blog Informed Comment, "The Shi’itization of Baghdad was thus a significant cause of falling casualty rate." On August 24, 2007, The New York Times quoted statistics by the Iraqi Red Crescent organization indicating that the total number of internally displaced Iraqis had reached 1.1 million from 499,000 since the beginning of the surge. So that’s the true legacy of the surge—the ethnic, sectarian cleansing of Baghdad. This has nothing to do with claims by Petraeus, the Bush administration, and the McCain campaign that the surge caused the alleged drop in violence in Baghdad. And the tragedy in Iraq goes on. The day after AP sent a dispatch all over the world saying the surge is working, four female suicide bombers opened the gates of hell again, killing or wounding no less than 350 people in Iraq.