Maurice Carney: 3,000 member force intervention will further militarize Congo; US has power to sanction rebel-backers Rwanda and Uganda, but will not because they are allies in American AFRICOM strategy

Maurice Carney: 3,000 member force intervention will further militarize Congo; US has power to sanction rebel-backers Rwanda and Uganda, but will not because they are allies in American AFRICOM strategy 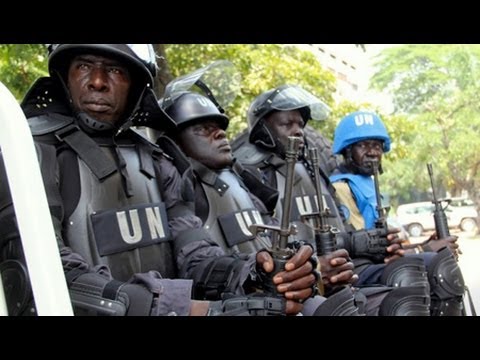 PAUL JAY, SENIOR EDITOR, TRNN: Welcome to The Real News Network. I’m Paul Jay in Baltimore. And welcome to our regular report on the Congo.

Now joining us again from Washington, D.C., is Maurice Carney. He’s the executive director and cofounder of Friends of the Congo.

Thanks for joining us, Maurice.

MAURICE CARNEY, EXEC. DIR. AND COFOUNDER, FRIENDS OF THE CONGO: It is a pleasure being with you again, Paul.

JAY: So what are you following this week?

CARNEY: We’re focused on the intervention, the UN intervention brigade for the Congo. And to explain to you, to the viewers, the United Nations passed a resolution at the end of March, 2098, calling for approximately 3,000-strong force in the east of the Congo, ostensibly to go after rebel militia that have been destabilizing the region, and also be under the command of the existing MONUSCO troops that are there, numbering close to 19,000.

So what’s important for people to understand: the origin of this intervention brigade, which is going to draw troops from South Africa, Tanzania, and a number of other African countries, it’s the product of an existing arrangement that came out of the regional conference in 2012. They call it the International Conference on the Great Lakes Region, that one of the propositions was to have a neutral force. And that neutral force idea was taken up by the United Nations as part of its peace framework that it established this year.

But it’s critical to understand that this is–it’s not the optimum way for the UN to actually deal with this issue. We know that Rwanda and Uganda have been destabilizing the region. However, instead of sanctioning those governments or holding officials accountable, what the UN has opted for is an intervention brigade, a military solution, which raises a number of questions, especially considering that ultimately what’s going to lead to stability in the region are political solutions.

JAY: So where is Rwanda and Uganda on this intervention force? I mean, did they oppose it? I mean, in theory, this force is going to be fighting some of their proxies in the Congo.

CARNEY: True, they’re going to be fighting some of their proxies. But this was part of an agreement that was signed by 11 African nations and regional bodies. So they signed on to it. So they have no choice but to be in agreement with it, whether or not they like it or not.

The M23 rebels have come out vociferously against it. Jeune Afrique had published some reports within the last couple of weeks or so saying that Paul Kagame himself had tried to prevent the United Nations from actually going forward with the intervention brigade.

As you–your viewers know by now that Rwanda is a member of the UN Security Council, will be so for the next two years. So they have–in spite of that, they’ve already signed on to the peace framework accord that was established in February. And this brigade is a part of that effort. So they can hardly, you know, fight against it or do anything to block it or prevent it.

JAY: So where is U.S. policy on this? I mean, we know Rwanda and Uganda are essentially American allies, and they’ve been the one backing many of the rebel forces in the Congo. And then you have the whole AFRICOM strategy of the United States in Africa, which is, you know, the militarization of various parts of Africa and beefing up American presence there. So how does that all fit together?

CARNEY: Well, that’s a really key question, because when it comes to the Congo and the Great Lakes region that include Rwanda and Uganda–I’ve shared with you in the past that the U.S. has had a policy dating from the 1990s, from the Clinton administration, that protects its allies in the region, you know, and present Kagame, present Musaveni as the new African leaders, the renaissance leaders, in spite of the heinous crimes that they’ve committed in the region.

So what happens is that whatever policies that come out of the U.S. or come out of the UN, they usually come in a way that give Rwanda and Uganda a pass. As I said, the policy that should have been taken or pushed aggressively or assertively would be to sanction Rwanda, ’cause Rwanda had violated UN sanctions embargo by providing arms to rebel groups inside of the Congo.

JAY: What kind of sanctions would be effective? I mean, what I know is most sanctions don’t actually become very meaningful.

CARNEY: Well, in the case of Rwanda, it is quite meaningful, because Rwanda trades a lot on its image of a good neighbor, a country that handles development dollars well and is the darling of the West. So anything that would affect the image of Rwanda can be significant. The sanctions of individuals, for example, placing high-level Rwandan individuals that have been named in the UN reports on the sanctions list, you know, freezing their assets, preventing them from traveling to the U.S., those kinds of steps will send a strong signal to Rwanda that the United States is finally willing to hold its ally accountable.

But at the UN, as I’ve shared in past interviews, the U.S. ambassador to the United Nations, Susan Rice, has run interference and blocked any kind of sanctions and basically watered down any kind of accountability that would actually bite the Rwandan regime.

JAY: And we’ve talked about this before. I guess we should remind people, ’cause not everybody sees every story we do on the Congo, that President Obama, when he was Senator Obama, actually sponsored legislation that was supposed to censor outside, external countries interfering in the Congo, and everybody thought that meant Uganda and Rwanda. But since he’s been president we haven’t heard much about that bill.

CARNEY: No, no. Public Law 109-456, Section 5 of that law states that secretary of state is authorized to withhold aid from neighboring countries that destabilize the Congo. And the United States has been reluctant to withhold aid. It wasn’t until last summer, 2012, that they withheld a measly $200,000 in military training that may–was symbolic and made a difference in a sense that other European nations followed suit. But more action like that is needed.

And, in fact, at this moment that is what’s most critical is for the United States, to continue to put pressure on its ally. It’s funny saying that, actually, ’cause the U.S. can do that. You know, Rwanda, up to 40 percent of its budget comes from donors in the West. So the U.S. and other European nations can easily put pressure on Rwanda. But they refuse to do so because Rwanda is an ally.

JAY: And can you remind us again the scale of the destruction that’s taken place in the Congo over the last few years?

CARNEY: Well, since last year, nearly 1 million people have been displaced. Since 1996, Rwanda and Uganda has invaded the Congo twice, support proxy militia inside of the Congo. They fought each other on Congolese soil, where millions of people have lost their lives. Hundreds of thousands of women have been systematically raped.

So what has happened is that the U.S. and the U.K. have not followed suit and have also blocked further action at the UN. So we’ve seen international bodies, the International Court of Justice, the Spanish courts all trying to hold Rwanda and Uganda accountable for the heinous crimes they’ve committed in the Congo. But because they have friends, powerful friends, like the United States and the United Kingdom, Rwanda and Uganda have been able to get away literally with murder in the region.

JAY: Alright. Thanks for joining us, Maurice.

CARNEY: Thank you. Thank you, Paul.

If you would like to see more coverage of the Congo and Africa and other types of international news we do here, we need your support. We have a spring fundraising campaign on. If you haven’t seen, you just take a look up here. Probably you’ll see the thermometer. We have a matching grant of $50,000. Every dollar you give will get matched until we hit the $100,000 mark. We’re just in the last few days of the campaign. So if you’ve been thinking about donating, now’s the time to push Donate, because if we don’t match this in the next few days, before May 2, we ain’t going to get the rest of the match.

Thanks for joining us on The Real News Network.