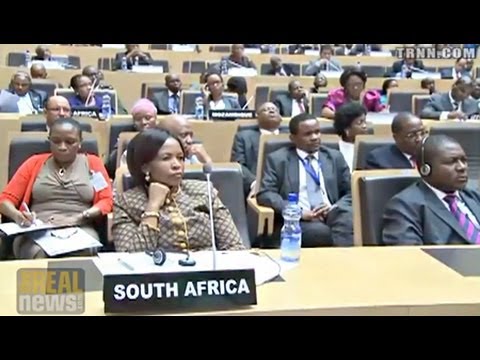 Since 1996, more than 6 million people have been killed in civil war in the Congo. In February of this year, a groundbreaking agreement was signed called Peace, Security, and Cooperation Framework for the Democratic Republic of the Congo and the Region. The agreement was signed in February by 11 African countries, including Angola, Burundi, Central African Republic, Republic of Congo, the Democratic Republic of Congo, Rwanda, South Africa, South Sudan, Uganda, Tanzania, and Zambia.

On Wednesday, May 22, World Bank Group president Dr. Jim Yong Kim and United Nations Secretary-General Ban Ki-moon will make a visit to the African Great Lakes region to show their support for this peace agreement and to push for economic development.

Now joining us to talk about the peace agreement and the trip is Maurice Carney. He’s the executive director and cofounder of Friends of the Congo. And he joins us now from Washington, D.C.

Thanks for joining us again, Maurice.

MAURICE CARNEY, EXEC. DIR. AND COFOUNDER, FRIENDS OF THE CONGO: It is good to be with you again, Paul.

JAY: So, first of all, why the trip now, and what do you make of the agreement?

CARNEY: What I’d like to share with you, Paul, and for the viewing audience to understand: that the peace agreement, the peace framework, and the subsequent trip to the region on the part of the UN head and the World Bank head is really an alternative to what can be done directly. That is to say, a major obstacle for the Western nations and the Western institutions is that at the core of the instability in the Congo are Western allies Rwanda and Uganda. So instead of the United States pursuing policies that will hold its allies accountable, they’ve developed alternatives that would wind up not actually getting to the core of the matter, alternatives that would let Rwanda and Uganda off the hook. And this peace framework that was developed by the United Nations represents this alternative, which is not the optimum way to bring about peace, stability in the region. So I wanted to make that clear.

JAY: Hold on for a sec. I mean, wouldn’t some people argue–perhaps the Obama administration might argue this–that this is better to have a regional framework? Why should the Americans be telling countries what to do or what not to do in Africa? Why shouldn’t it be the region that sorts this out?

JAY: Paul Kagame, the president of Rwanda, he denies that Rwanda’s playing this role in Congo, and he says that this is Congolese can’t sort out their own affairs so they’re blaming us.

CARNEY: Listen, the evidence is overwhelming. Whether we talk about the 1997 Garreton Report, you know, or the 2001 to 2003 series of four UN reports that said Rwanda and Uganda, Paul Kagame and Yoweri Museveni are the godfathers of the looting of the Congo, or we look at the 2010 UN mapping report that says Rwanda may have committed genocide in the Congo if tried in front of a competent court, it could be determined that Rwanda committed genocide in the Congo, or we look at the 2008 report by the United Nations Group of Experts that documented how Rwanda was supporting then rebel leader in the Congo Laurent Nkunda, that Rwanda subsequently put under house arrest in Rwanda, and then the 2012 report, there’s just an abundance of evidence. There’s little to no dispute about the role that Rwanda and Uganda have played. I mean, they’ve invaded the Congo twice, in 1996 and in 1998. When they invaded Congo in 1998, the Southern African Development Community nations, led by Zimbabwe and Namibia and Angola, they fought Rwanda and Uganda inside of the Congo to kick them out of the Congo, in an attempt to kick them out of the Congo. So you had African nations that have confronted these U.S.-backed invasions militarily. So that’s the history. So there’s very little dispute about whether or not Rwanda is sponsoring militia in the Congo.

JAY: So what’s the substance of this framework agreement, then? You know, the two countries that seem key here is Rwanda and Uganda. What have they agreed to in this framework?

So we see here that these proposals on the peace framework and whatever the International Conference on the Great Lakes Region have developed in the past have skirted the issue of holding Rwanda accountable and delivering justice for the Congolese people. So we’ve seen this pattern, whether it’s on the regional level or on the international level, the reluctance on the part of world leaders to hold Rwanda accountable, for a whole host of reasons, many of which I’ve shared with you already.

JAY: So why do you think the World Bank and the UN head are going now? I mean, why are they getting so involved in what you’re saying is sort of a fig leaf process?

There’s greater media attention. Human rights groups are speaking up more. Whatever is happening in the region now, like, you’re covering it on your broadcast outlet, Al Jazeera’s covering it, others are covering it. So there’s greater attention being shone on the region. And as a result of that, we see the role that the United States in particular and United Kingdom are playing in perpetuating the conflict through their support of their allies Rwanda and Uganda.

And one of the reasons why the–another reason why the World Bank in particular is getting engaged is because Rwanda itself–Rwanda is the darling of the West. It really represents–the country represents the beachhead of neoliberalism in the heart of Africa. So they want to preserve this neoliberal model. And that’s why you see the World Bank coming in and talking about economic development. And the economic development they’re talking about is firmly ensconced in this neoliberal approach, where assets are privatized, where mining companies are given sweetheart deals, where the local population do not exercise any resource sovereignty over the enormous wealth that is there. So it is these policies that are being pushed by the UN and by the World Bank. And Rwanda is held up to the world as the model for the future of the region and, as Bill Clinton would probably say, the future of the African continent, where we see neoliberalism on full display and Rwanda and Paul Kagame being at the forefront of this effort.

JAY: So that doesn’t go very well with holding Rwanda accountable for what’s going on in the Congo, its support of rebel groups in the Congo.

JAY: I think we should add that when you say these things, you’re not really including the Congolese government. You don’t leave them off the hook, do you?

CARNEY: Well, the Congolese government, as we’ve shared before on this program, doesn’t have the legitimacy and the support of the people. They appropriated the 2011 elections with the backing of the international community.

And as I’ve shared in the past, there are two fundamental challenges that the Congolese people face. One is the intervention on the part of its neighbors Rwanda and Uganda. And the second is an illegitimate regime in the form of Joseph Kabila’s government that doesn’t represent the interests of the Congolese people.

JAY: Alright. Thanks for joining us, Maurice.