While the accusations against Cuba sound like 'something out of a bad sci-fi film,' the consequences of reducing diplomatic staff in Havana and Washington DC have serious consequences for relations between the two countries, explains Prof. Michael Bustamante

While the accusations against Cuba sound like 'something out of a bad sci-fi film,' the consequences of reducing diplomatic staff in Havana and Washington DC have serious consequences for relations between the two countries, explains Prof. Michael Bustamante 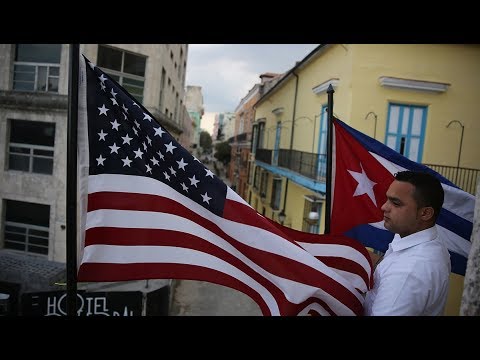 GREG WILPERT: Welcome to The Real News Network. I’m Gregory Wilpert joining you from Quito, Ecuador. The US government required Cuba to withdraw 60% of its embassy staff in Washington DC last week. The move appears to signal a gradual unraveling of the reestablishment of diplomatic relations between Cuba and the US that President Obama reintroduced in late 2014. The Trump administration’s reason for removing 15 of Cuba’s diplomatic personnel is that it says the US Embassy in Havana has been the target of mysterious sonic attacks and that about 21 of its staff has experienced headaches, hearing loss and mild brain injury. The Cuban government vehemently denies any involvement of such allegations and such alleged attacks, and says that it is cooperating fully with the US to investigate the matter.

Joining us to analyze this latest twist in US-Cuba relations is Professor Michael Bustamante. He is the assistant professor of History at Florida International University where he specializes on modern Latin America and the Caribbean.

Thanks for joining us, Professor Bustamante.

GREG WILPERT: Before we get into what might be behind this latest crisis in US-Cuba relations, what would you say has been the most immediate effect of the pairing down of embassy staff in Havana and in Washington DC of the respective countries?

M. BUSTAMANTE: Sure. For me and I think for most Cubans, the most important and immediate effect has been the impact on consular operations on both sides of the Florida Straits so to speak. So, the US has taken out of Cuba most of its diplomatic staff at the embassy, which means that the consulate at the US Embassy in Havana is effectively closed, meaning that all issuing of US visas is on hold. This has left a lot of Cubans that were sort of entrain, applying for visas of different kinds in limbo. It’s meant that folks have had sometimes waited months or years to get family reunification visas, to move to the US are now not sure when that’s going to happen. The United States has said that that program will continue, but it’s unclear how it can if they don’t have a full consular staff.

Conversely, with Cuba having left with only one consular representative at its embassy in Washington, this is going to mean a serious backlog for the processing of Cuban passport applications and renewals that are necessary for Cubans and the diaspora who travel back to the island to visit family.

GREG WILPERT: It is kind of interesting though that the State Department refers to this as an attack even though as far as we know, it hasn’t presented any evidence. And it is speculating not only that but it is a sonic weapon of some sort. However, the New York Times recently investigated this possibility and discussed this with scientists and health specialists. The consensus seems to be that such a thing is practically impossible. It would seem that the sonic attack accusation sounds rather flimsy and there might be something else motivating such a confrontational approach to the problem. What do you think is behind all of this?

M. BUSTAMANTE: I wish I had an answer. I’m not a scientist. I’m a historian so I can’t vouch for the scientific feasibility of some of these things. I’ve certainly read those articles in which reputable scientists have questioned whether this kind of device is even feasible, and whether the sonic weapons that do exist or known to exist can produce some of the reported effects in such narrow spaces as apparently has been the case as reported by some US diplomats. I’m not willing to go so far to say that their allegations are completely false but it’s very difficult to ascertain the viability or the believability of what’s going on in the absence of more public information. We’ve just had a release from the Associated Press this afternoon of an apparent recording of one of the sounds that an affected diplomat heard, but again, so far, most of the sources and testimonies that we’ve heard had been anonymously, and so it’s really difficult to figure out what’s behind this if there’s any ulterior motive.

But what I can say with certainty, whether or not these accusations are true or Trumped up, is that their effects are very real and that those that have always opposed in the normalization of US-Cuban relations are, I think, seeking to mobilize to take advantage of this moment to push the Trump administration to go even further than it proposed in June to unwind the Obama administration’s approach.

GREG WILPERT: Yeah, I want to get to that in a minute. But first, I want to raise another issue that seems kind of curious about all of this, which is that the Associated Press reported recently that some of the first victims of this so-called attack, according to inside sources, were CIA agents in Havana. What would you make of that? Doesn’t it strike you as a little bit strange? Or what’s your reaction to that?

M. BUSTAMANTE: I mean it certainly does. The whole thing strikes me strange, whether it was CIA agents or not. We’re talking about sonic weapons. This sounds like something out of a bad science fiction movie. But that report did pique my attention too. I’m not quite sure what to make out of it. I mean, if it is true that US Intelligence officials under diplomatic cover in Havana as we know exists as other countries have intelligence officials undercover in the United States, if those folks were the first ones targeted, that suggests perhaps there’s more of a targeted approach, some kind of beef between intelligence services maybe. But I really don’t know what to make of it. I think just as strange as the fact that some of the intelligence officials are potentially some of the first targets is the reports that Canadian diplomats have also suffered the effects of this to a lesser degree, but there are some reports.

We know that Cuban-Canada have excellent relations as they have had for a long, long time. So for the life of me, it’s really hard to think of a motivation as to why they would be attacked, not even thinking about the US factor here.

GREG WILPERT: Let’s get into the issue that you raised earlier about the possibility of exploiting this crisis. Trump has repeatedly said that he opposes Obama’s opening towards Cuba just as he opposes pretty much all other openings to countries that Obama initiated. Trump also seems to be heavily influenced by a Florida senator, Marco Rubio, who’s been calling basically for a new cold war with Cuba. Do you foresee a further deterioration of US-Cuba relations under the influence of the Cuban exile lobby in Florida? Do you think that perhaps the business interests, which are quite strong and in favor of maintaining an opening that these might be able to prevail?

M. BUSTAMANTE: The problem with counting on business interests to sort of put a break on the unraveling of the normalization that did take place is that not enough business interest from the US really set root in Cuba to provide an effective counter weight. There were some US business interests that were able to forge space in the Cuban market, but not enough. And frankly, that’s because of both the rules that continue to hinder that on the US side during the Obama administration, but also the slowness with which Cuban officials at times were willing to sign deals. I think there’s probably folks on both sides that are a little bit kicking themselves that those relationships didn’t go further. I think those business constituencies to the extent that they exist will push against any further rollback.

I would say that one important milestone to watch is the release, we’re not sure when, but of the regulations that implement the Trump administration’s policy announcement back in June. Back in June, Trump rhetorically announced what sounded like a complete break with the Obama administration’s approach, but the actual measures that he proposed were not productive in my view, but also not anything close to a full rollback. I’m wondering if the writing of those regulations, which is ongoing, is now going to be affected by the kind of environment created in the wake of this other crisis, and that they could be harsher than they would have been otherwise.

I do see a potential for this to keep spiraling. I hope that wiser voices prevail on both sides and stop it from doing so.

GREG WILPERT: Another curious detail that I saw in one of the reports was that the people that the Trump administration expelled from the Cuban Embassy in Washington DC were people from the business sector really, that is the ones who manage their business relations. I’m wondering if this might be just another attempt to basically thwart the strengthening of business ties between the US and Cuba. What do you think?

M. BUSTAMANTE: Yeah, I think that’s quite possible. I think even if you buy the premise that it was appropriate for the United States to expel Cuban diplomats as some sort of active complementarity, which I don’t necessarily buy, but even if you do, it seems clear that the choice of which diplomats to expel seems to have been targeted in a couple of ways. The entirety of the business section was expelled. My sense is that we’re talking about three or four people. But also almost all of the consular section as I mentioned. Those two choices I don’t think are coincidences.

Certainly, the kind of growth of business ties between the United States and Cuba is something that those against normalization or do not favor, and increasingly, those from Florida and outside of Florida that don’t support normalization were also very weary of just how interconnected Cuba and its diaspora had become through travel, through remittances, or even sort of under the table investment. Those things are made possible through consular operations, the approval of visas, the renewal of passports, etc. So, by getting rid of most of Cuba’s consular staff, you’re really putting a break potentially on that transnational flow of people and goods and resources, and that’s something that certainly hardliners in Miami would favor. I do see the potential for the hand of the influence of those against normalization in the decision of who to expel from the Cuban Embassy.

GREG WILPERT: Okay. We’ll definitely keep an eye on this as it develops and we’ll probably want to come back to you to talk more about it. I was speaking to Professor Michael Bustamante of Florida International University. Thanks Michael for having joined us today.

M. BUSTAMANTE: My pleasure. Thanks.

GREG WILPERT: And thank you for watching The Real News Network.