Lindsey Graham, a key spokesman for neocons and the military-industrial-complex, has said it's time for MBS to go – From a live recording on October 16th, 2018 with Paul Jay and Ben Norton

Lindsey Graham, a key spokesman for neocons and the military-industrial-complex, has said it's time for MBS to go – From a live recording on October 16th, 2018 with Paul Jay and Ben Norton 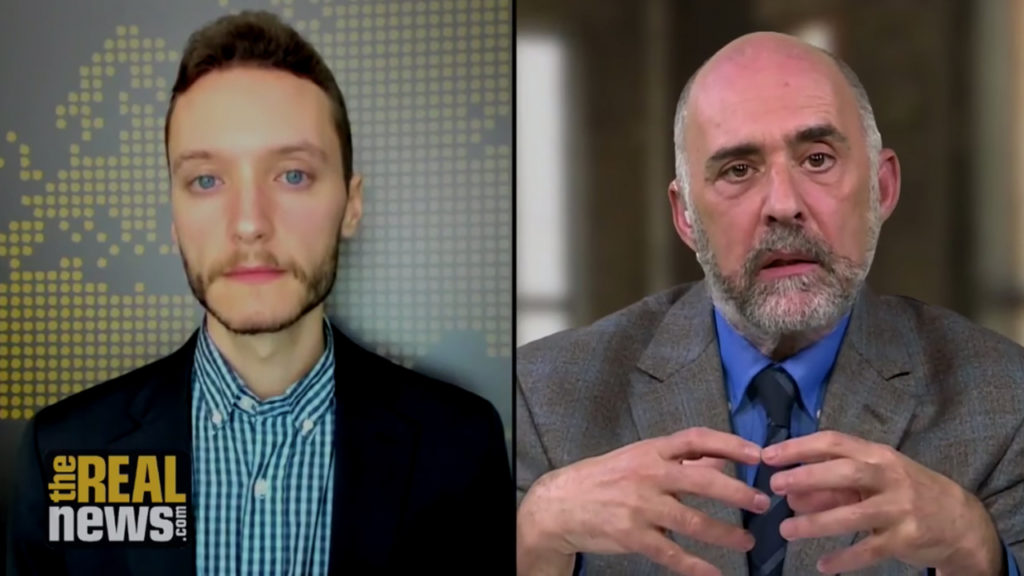 BEN NORTON: Now Mohammed bin Salman has moved toward pretty openly allying with Israel. And of course, Saudi Arabia wants to destroy Iran. Saudi Arabia, Israel, and the U.S. all mutually see Iran as a common enemy. How do you think that plays into this relationship, as well?

PAUL JAY: Well, there’s so many fracture lines, and a complicated situation here. And I’m not an expert, but I talk to a lot of experts, so I can tell you what I’ve gleaned from all this.

When I said earlier that to be the global hegemon you must be the hegemon in every region, one of the fundamental concepts or principles of U.S foreign policy is you can’t allow a rival, even at the level of a region. So they don’t like the fact that Russia has become a rival in the region. They don’t like the fact that China can say no, even though there’s a lot of integration in the economy. In the final analysis, China has become a very powerful player that can defend Chinese national interests. And they don’t want that competitor in Asia. When I say ‘they,’ this is a very bipartisan ‘they,’ because whether it’s a Republican leadership or a Democratic Party leadership- you remember Obama’s Asia pivot- the idea of containing China has always been part of the American fundamental thesis that you cannot allow regional competitors.

And this is because it’s kind of obvious from the 20th century, whether it’s the First World War or the Second World War, that over time big capitalist powers, they rise, and they want their share of the global plundering pie. It’s not that China- no one is as aggressive as the United States. But one can imagine that there’s a point where China, certainly in the American elite’s eyes, is going to want a more dominant role; certainly in Asia, and is even competing in Africa and Latin America. So the American solution for this, American elite solution, is you just dominate everywhere you possibly can. You have regime change any time a country stands up to you, if you can. Of course, in China they can’t. They would like to do it, I think, in Russia, but they can’t.

But Iran is- they think they can. And this is a region that goes right back to this deal between Roosevelt and Ibn Saud. And of course the emergence of Israel, which became like a land-based battleship for the United States, armed to the teeth with the most sophisticated weaponry for controlling the region. So the Iranian revolution that overthrows the Shah upended what was a plan, the plan, for the region. You were not supposed to have some big country like Iran escape the American umbrella, and they did. And so whatever you make of the Iranian theocracy- and I’m sure a lot of Iranians would like to be done with the Iranian theocracy, although it obviously also has support, or it wouldn’t still be there- most Iranians appreciate and want to defend the sovereignty of Iran, the independence of Iran.

But the Saudis want to be the player. This idea that the Saudis represent Islam in the region, the Saudis are going to be the leaders of the region, this is very important to them. They don’t want any competition. Not just from Iran. They don’t want competition from Turkey. They certainly don’t want competition from Qatar. And the Saudi royal family wants regional hegemony. They wanted to get rid of Assad so they could impose a pro-Saudi government in Syria. They’re very influential in the politics of Pakistan. They see themselves as a regional mini-superpower, if you will.

But I think what’s happening here with the Khashoggi thing is they’re getting- MBS, the crown prince, is getting maybe a little too big for his britches, in the American eyes. You know, what Trump said is an important quote, of all these last few days. Where Trump says to the Crown Prince, you know, you’re in power because we let you be in power, because we support you. You know, you wouldn’t last for two weeks without us, says Trump.

Well, I don’t know if it’s two weeks, but it’s a very important point, that he’s reminding MBS who’s the boss. You know, you’ve got your riches, you’ve got this crazy, fabulous wealth, because you pay tribute to the empire. And that’s been the deal with the Saudis for decades. They pay tribute through arms purchases. They return to the United States an important portion of this fabulous wealth through buying arms. And the United States doesn’t like that over the last years- it didn’t start with MBS, but the Saudis have been increasingly playing footsie with buying arms from the French. They’re buying and talking to the Russians, the Chinese. This isn’t what the- why the Americans have, according to Bush- not Bush, Trump- have spent billions keeping the Saudis in power.

So you’ve got this- MBS, the Crown Prince, seems to have gotten so big for his boots that one, he’s playing games with the U.S. that the Americans don’t like. And I think part of the Khashoggi thing is that he didn’t ask permission to get rid of this guy. Like, you’re going to- in Turkey, you’re going to take a guy who’s an American legal resident, who works for the Washington Post, and you’re going to supposedly interrogate him, and then by mistake kill him- whatever the story is. You’re doing that without asking? Uh-uh. Trump is saying, you work for us. Lindsey Graham, who apparently is saying MBS should even step down, is saying no, no, no, you’ve got to remember what the pecking order is, here. It’s not like they care about the rights of this journalist, because if they cared anything about rights, they would care about the atrocity after atrocity the Saudis have committed, not only in Saudi Arabia but in Yemen, and what they did to instigate this horrible catastrophe in Syria. They don’t care about any of that.

So why making such a big issue out of this journalist? Well, because I think it reached the point where MBS crossed the line. And he crossed the line internally, too. I think it’s very important, as I understand it- again, through getting a chance to talk to people that understand the Saudis, the Saudis was really a bunch of feudal, like, fiefdoms. Very powerful princes that the king kind of mediated. But this is- wasn’t a one-king dictatorship. This was a dictatorship of maybe 10, 15 very, very powerful princes. And what MBS seems to be doing in the name of reform is turning this, really, into a one-man autocracy. And he’s infuriated other princes, who had tremendous power.

And it looks like- we did a story, I guess, just the other day about Khashoggi picked the wrong prince. His alliances seem to have been in sections of the monarchy that don’t like what MBS is doing. And there also- just to add one thing- there also seems to be serious divisions with MBS’ pursuit of the war in Yemen. And maybe the U.S. is tiring of all of this. U.S. being the Trump clique, the Lindsey Graham and industrial-military complex clique. Because to get back to your first question, it’s starting to get in the way of what they really want, which is attacking Iran. They want regime change in Iran. They want to weaken this regional player that can say no to the United States. And maybe MBS is getting off the agenda here, and so maybe it’s time they want MBS gone.