2500+ Killed by Drones in Pakistan, Names of Victims Now Available 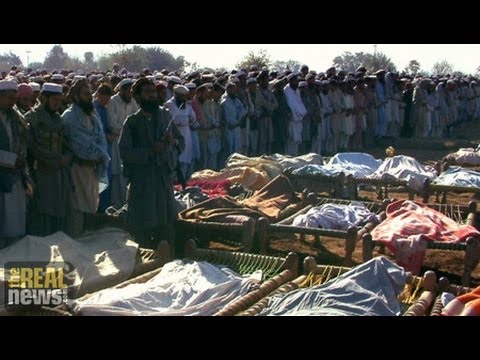 It’s believed more than 2,500 people have been killed by U.S. drone strikes in Pakistan alone. A new website has been launched to identify the victims and challenge U.S. claims that all of those killed are militants. It’s called NamingTheDead.org and is being launched by the Bureau of Investigative Journalism.

Now joining us to discuss this is Medea Benjamin. She’s the cofounder of the group Code Pink.

Thank you so much for joining us, Medea.

MEDEA BENJAMIN, COFOUNDER, CODEPINK: Thanks for having me on.

NOOR: So, Medea, the U.S. government has been escalating drone strikes from Pakistan to Yemen. As I mentioned, more than 2,500 people have been killed by drone strikes in Pakistan alone. Who are these victims? And what are you hoping comes out of this project to identify who the victims are?

BENJAMIN: It’s very important that the Bureau of Investigative Journalism carry out this project about Naming the Dead. But it is quite strange that it’s a U.K. media group rather than the U.S. government that is giving us this information. We should have the right to know who is being killed in our name. And according to the Naming the Dead project, they have already identified about 600 people of the 2,500-plus who have been killed. About half of those so far they’ve identified are civilians, and about 100 of them are children.

Now, if you ask the U.S. government, they would say almost no civilians have been killed, and then they certainly would not acknowledge that children have been killed. So we are looking forward to this project giving us a detailed information about who has been killed, profiles on a number of these people. And we hope to educate the Americans that the drone warfare that our government tells us is so precise is not precise.

NOOR: So, Medea, on the issue of compensation for the victims, has there been any progress on that?

BENJAMIN: There is no progress on compensation for the victims. It’s very strange, because if your family member was killed in a drone strike in Afghanistan by the U.S. military, you would be entitled to an apology and compensation. Yet if in neighboring Pakistan or in Yemen you had a family member killed, the U.S. government–that means the CIA or the military–would not acknowledge the death, would certainly not apologize, and would offer no compensation.

So we are pushing for our government to do that kind of apology, acknowledgment, and compensation, but so far have achieved nothing. In fact, we haven’t even achieved the simplest demand, which is to get our government to tell us who has been killed.

NOOR: And talking about kind of domestic pressure against drone strikes, you’ll be taking part in a conference in D.C. in November to address this issue. And in two years, the U.S. will open its airspace for drones to fly in the United States. Can you talk about the disputed legality over this issue internationally and domestically?

BENJAMIN: We’re very excited about our upcoming Drone Summit November 16 and 17 in Washington, D.C. People can get more information on the CodePink.org website. It will be the first time we’re bringing people together from Afghanistan, Yemen, Pakistan, from Europe, from people who have been drone operators who decided they can’t do this anymore, international law experts, all kinds of people, to set up a global network to push for the regulation of killer drones and the regulation of spy drones.

In terms of the spy drones, when the U.S. airspace is opened up to drones in September 2015, if we don’t do something about it, there will be upwards of 10,000, 20,000 drones flying overhead. And if American people think they are already overwatched by our government, wait till these drones are overhead and we become a 24/7 surveillance society. So we are working with communities all over the country on the local, the state, and the national level to try to get regulations in place that would say the drones being used by law enforcement agencies in the United States would have to get a court order before spying on somebody here, and that drones in the United States cannot be weaponized. So these are some very important issues that we along with other groups are working on.

NOOR: Medea Benjamin, thank you so much for joining us.

BENJAMIN: Thanks for having me on.