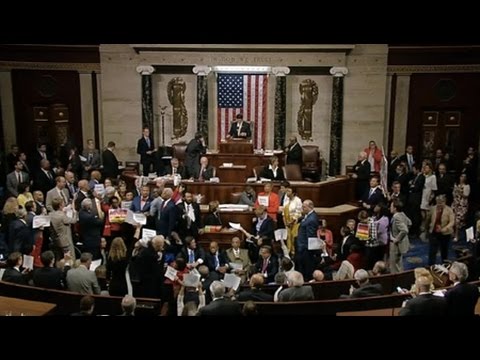 Congressional Democrats began a sit-in on Wednesday in the House of Representatives to push for a vote on gun control legislation. One of the bills in question, No Fly, No Buy, would ban gun sales to people on federal government watch lists such as the no-fly list. In an article in Gawker, “The Democrats Are Boldly Fighting for a Bad, Stupid Bill”, Alex Pareene writes that the bill will only add to the surveillance apparatus and will disproportionately target Arab- and Muslim-American communities.

Joining us to talk about this is Medea Benjamin. Medea is the cofounder of the peace group CODEPINK and the human rights organization Global Exchange.

Thanks so much for joining us today.

MEDEA BENJAMIN, COFOUNDER, CODEPINK: Thanks so much for having me on.

KANJI: So, Medea, on the surface it seems like this is a fight between a few brave Democrats who want to reduce gun violence in America and Republicans who want the attention shifted to radical Islam. Republican Congressman Louie Gohmert even came on to the floor, started yelling that point to the group of Democrats. Is that narrative accurate, or is there a bit more nuance to the situation right now in Washington?

BENJAMIN: Well, it’s a partisan fight, unfortunately. Were it a nice, pure fight to stop gun violence, that would be terrific, but it’s not. It’s a partisan fight. The Democrats are much better on this issue than the Republicans, but they’re doing it for political reasons. If they weren’t, they would take on the real issues, like banning assault weapons. Instead, they took on a fake one like the no-fly list, because how could you say that people who are on a terrorist watch list should get access to weapons? So they picked the, quote, easiest target, which is wrapped up in Islamophobia, but they did it in a great way. So it’s very contradictory.

I think we should celebrate, on the one hand, the political theater because we see it so rarely in the United States, where our representatives get up without a script and just start extemporaneously talking. And it’s nice to hear and get to know them a little better. But recognize this is part of party politics in an election season.

KANJI: Right. I mean, these lists are known to be unreliable and error-prone, these government watch lists, and they do affect a disproportionate number of Arab and Muslim Americans. How would this bill specifically put innocent people at risk of losing civil liberties and encountering abuse?

BENJAMIN: Well, let’s recognize how contradictory it is, because I, like a peace person, I don’t want anybody to have guns. I mean, sure, you can have your hunting rifles, whatever, but really I would like to have none of us have guns. So am I going to fight so that people who are on a no-fly list have access to guns? Not really. But on the other hand, it is not fair that a list that is so arbitrary, where hundreds of thousands of people are put on there without any evidence of having any links to terrorism, it just does feed into the Islamophobia.

KANJI: In Obama’s first two years of office, actually, he could have maybe taken a stand on gun control with a Democratic majority in the Senate and the House, but he didn’t. How complicit are the Democrats in not properly regulating guns?

BENJAMIN: Well, the Democrats are totally complicit. They could have done it, as you said, when they controlled both the House and the Senate. They could have made a huge stink of this after any number of the massacres that occurred in the past. They’re doing it now because they’re in the heat of a presidential election season.

I think it’s good, though, to build up on this issue, because it’s high time we had some mass involvement in trying to get some gun legislation. So while on the one hand I think we could condemn the target they put and recognize that it is political theater, on the other hand let’s use it to our advantage. Let’s show up at their rallies calling for assault weapons ban for the more substantive kind of gun control measures, like closing all of the background-check loopholes, and let’s build on the momentum of people getting involved. Let’s go to the doorstep, as we have at CODEPINK, of the NRA, which is so responsible for the proliferation of guns in our society.

So I think there’s ways we could take advantage of the momentum that’s out there and turn it away from the No Fly, No Buy into things that have more substance to them.

KANJI: And that’s right: on Monday, CODEPINK held a rally at NRA. Can you tell us a bit about that?

We stayed up and watched a film by Brave New Films called Making a Killing about the NRA. And then we did a ceremony at 2 a.m. to commemorate the people from Orlando who were killed, starting at 2 a.m., in that Pulse nightclub. And then, in the morning, we blocked the roadway to the entrance into the NRA. Eighteen people were arrested.

And we felt that it was important to go directly to the NRA. And we’d like to continue doing that. The NRA has a lobby arm right next to Capitol Hill in Washington, D.C. And we’d like to start a weekly sit-in, die-in, lie-in, whatever you want to do, in front of the lobby arm of the National Rifle Association.

KANJI: So you’ve been directly involved in all of this activism around gun control. Can you tell me what you think effective gun control legislation could look like?

But I did want to make one other connection that I think is important to make, which is, while people are focusing on the issue of gun violence in the United States and we have all these Democrats pledging to try to stop gun violence, it would be nice to also bring into the discussion the gun violence that we not only advocate but profit from in U.S. weapons sales of guns overseas. So Code Pink as a peace group wants to bring that issue into the conversation, since Democrats and Republicans have been selling record numbers of weapons to repressive regimes from Saudi Arabia to Israel, to Egypt.

KANJI: Alright, Medea, thank you so much for joining us.

KANJI: And thank you for joining us on The Real News Network.