Why America Needs to Give Guantanamo Back to Cuba

CODEPINK Co-Founder Medea Benjamin says the dispute between Castro and Obama is a question of Cuban sovereignty vs. American imperial ambition

CODEPINK Co-Founder Medea Benjamin says the dispute between Castro and Obama is a question of Cuban sovereignty vs. American imperial ambition 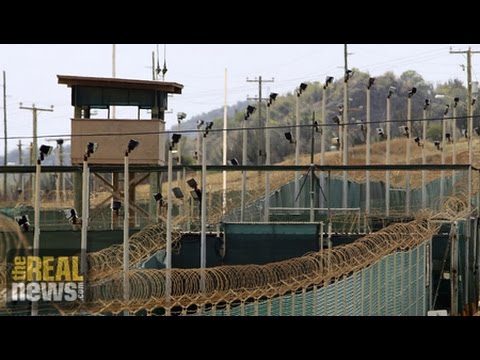 After the relations between the U.S. and Cuba started thawing, they might be approaching a cold front. Cuban President Raúl Castro wants the U.S. to return the U.S. Guantanamo naval base to Cuba. This base holds the Guantanamo prison, which Obama has promised to close since his first year in office. But the White House says that the base will remain in American control despite Castro’s call for its return back to Cuba.

Now joining us to discuss this latest back-and-forth is our guest, Medea Benjamin. Medea is the cofounder of the antiwar group Code Pink.

Thanks for joining us, Medea.

MEDEA BENJAMIN, COFOUNDER, CODEPINK: Hey. Thanks for having me on, Jessica.

DESVARIEUX: So, Medea, let’s first give our viewers some background here. How did the Americans even acquire a naval base in Cuba in the first place?

BENJAMIN: Well, this goes back to the Spanish-American War in 1898. And there was a group of about 600 Marines that landed on the area that’s in Guantanamo. And when the U.S. won that war, they signed a lease with the Cuban government at that time, in 1903, to keep that piece of property.

Now, the idea was that it would be leased for a year-by-year basis. But it turned into a perpetual lease. And, of course, when the Cuban government had changed radically in 1959, the U.S. government said, sorry, we have a perpetual lease on Guantanamo. Fidel Castro said, I don’t know what we can do about this; we don’t agree with it, but we don’t have the ability to kick the United States out. And what they did instead was refuse to take the money from the Americans. It amounts to a very large sum of $4,000 per year for this very, very coveted piece of land. And the Cubans just never cashed that check.

DESVARIEUX: Okay. And this piece of land has really become a major hurdle before the U.S. and Cuba in order for them to normalize diplomatic ties. What’s so significant about Guantanamo for Obama and Castro?

BENJAMIN: Well, first I should say that since the time of 1903, the U.S. kept expanding and expanding the base and it became its own city in Cuba, at one time with thousands of Cubans who would cross every day to work inside the base. And I think from the U.S. point of view it’s part of that imperial hubris that says, we have this base and it’s ours and you’re not strong enough to get us out, even though it’s in your own land, and so tough luck. From the point of view of the Cubans, it’s always been a tremendous bone of contention, because the Cubans, since the revolution, have wanted a sovereign nation. And imagine having this, what amounts to your enemies’ territory, on your own land. So over the years they have always been asking the United States to relinquish its control of the base, and the United States keeps saying no.

DESVARIEUX: Alright. Medea, let’s talk about Guantanamo prison, because some would argue that they agree with your group’s stance that we should close the prison, but they’re fine with the base because it’s sort of part of America’s role as the policemen of the world. What would be your response to that argument?

BENJAMIN: Well, first let us remember that there’s over 800 bases that the United States has sprinkled all over the world, many times in countries where the people don’t want us there, Jessica. And one example of that is in Guantanamo. I think no matter what your political leanings in Cuba, whether you support the Castro government or not, most people in Cuba have a deep sense of nationalism and don’t want a foreign base on their soil. So, I think as we move towards this normalization of relations, it’s very important to look at this issue of Guantanamo.

Now, we can’t talk about it without adding the fact that Guantanamo base has become synonymous with Guantanamo prison. We were in Cuba in 2007. We took a group of people, including family members of prisoners and ex-prisoners from the U.S. base in Guantanamo to go circle the base and do a protest there. And we met with many Cubans who said, we are so disgusted that our beautiful town of Guantanamo has become synonymous with Gitmo prison, a U.S. prison where people are kept in indefinite detention in very horrible conditions. So it’s a real stain on the feelings of the Cuban people and something that has to be brought up again and again with these negotiations.

DESVARIEUX: And we should point out that it’s not that black-and-white that this base would just become a Cuban naval base, for example. There are other proposals on the table, aren’t there, Medea?

BENJAMIN: Well, it’s very exciting. In fact, over the years, there’s been talk from all different kinds of groups saying, why don’t we turn the Guantanamo naval base into some kind of a venue where the U.S. and Cuba and the international community could work together on something positive. And the proposals that have been put forth range from turning it into an alternative green energy center, where lots of experiments would be going on with new technologies and solar and wind and other kinds of sustainable energy. Others have said, why don’t we turn it into a giant institute for peace, where people from around the world would be able to come to learn the skills of conflict resolution? So there are some exciting proposals that the Cuban government has been all for. But first they say they have to have sovereignty over the base before they could turn it into something like that.

DESVARIEUX: Alright. Medea Benjamin, thank you so much for joining us.