May Day Protests Around the World Pt.1

Workers take to the streets on International Workers' Day in Asia, Africa, the Middle East and Europe

Workers take to the streets on International Workers' Day in Asia, Africa, the Middle East and Europe 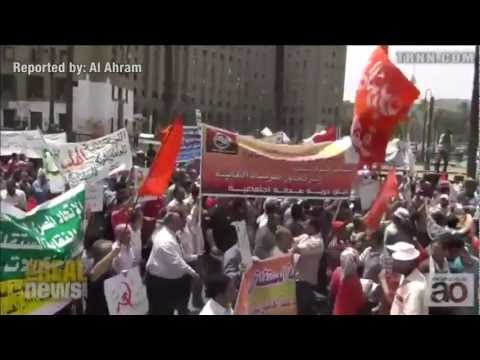 NOAH GIMBEL: Today, the first of May, marks International Workersâ€™ Day. Over 80 countries around the world have declared national holidays to mark the occasion, and workers everywhere are taking to the streets to show their unity and voice their demands.

In Southeast Asia, where workers face some of the harshest conditions with little, if any government protection, the turnouts were massive.

In The Philippines, workers protested for job security protections and higher wages, both for the countryâ€™s citizens working within its borders, and the 11% of the Filipino population that works abroad.

In Indonesia, workers rallied in the capital Jakarta, and in Bandung to protest their low wages and harsh conditions as well.

And with food and oil prices on the rise once again, garment workers in Cambodia struggle to survive on their meager salaries of $70 per month, so they took to the streets of Phnom Penh to demand change.

Elsewhere in Asia, protests were sponsored by political parties, like this one organized by the Communist party in Kyoto, Japan.

In Bahrain, where the democratic uprisings that have been going on for more than a year have been met with a harsh backlash by the ruling al-Kalifa family, protestors demanded the reinstatement of workers fired as part of the government crackdown.

In Egypt, union organizers marched from the Parliament to Tahrir Square demanding that the right to organize independent of government interference be guaranteed in the new Egyptian constitution, currently being drafted.

And elsewhere on the African continent, in Cote Dâ€™Ivoire and Burkina Faso, workers attended rallies that highlighted the alliances between governments and trade unionists, even as conditions and compensation for many African workers, such as those in Africaâ€™s most populous country, Nigeria, continue to deteriorate.

In Turkey, the political left organized a major march in Istanbul against neoliberalism, and a coalition of Muslim anti-capitalists held a rally in front of the iconic Blue Mosque.

And in Europe, where the financial crisis has resulted in wave after wave of government austerity, protestors took to the streets against what they perceive to be anti-worker measures, pursued by national governments.

In Greece, public sector workers face massive layoffs and pension cuts, and the working population as a whole faces an increase in the retirement age, cuts to social security, healthcare and public education.

In Spain, the rallies organized by the countryâ€™s major trade unions had largely the same message as workers there face similar austerity measures.

And in Germany, leftist parties organized events in solidarity with the European workers suffering the fiscal policies imposed by the Franco-German dominated European Central Bank.

Elsewhere, events were staged by political campaigns and government elites.

In Russia, President Dimitri Medvedev and president-elect Vladimir Putin marched in a rally staged by the government, while leftist groups held their own march elsewhere in Moscow. The major Russian opposition parties are planning to hold a million-person march on May 6th, prior to Putinâ€™s inauguration in protest of electoral fraud.

In France, the right-wing Nationalist Front held a rally featuring presidential candidate Marine Le Pen, and president Nicolas Sarkozy spoke of workersâ€™ rights before a gathering of his own supporters. But the largest protest was that of the French left. Representing a broad spectrum of interests, unions and political parties united to oppose the Sarkozy government and the path of fiscal austerity down which it has begun to move the country.

Finally, in London, where May Day is not a national holiday, workers went on strike and filled the streets, demanding an end to the conservative governmentâ€™s erosion of the National Health Service, public schooling and the rights of the public-sector workforce.

For the Real news, Iâ€™m Noah Gimbel in Washington.

Protesters Rail Against Police, Poverty in Baltimore May Day March

May Day Celebrations in Cuba