Bradley Manning Supporters Say Exposing Criminals is not a Crime

Outside Ft. Meade where Bradley Manning's trial will take place, hundreds rallied to say that Obama Admin. attacks on whistle-blowers is an attack on democracy (Note: estimates of crowd size varied from 500 to over one thousand).

Outside Ft. Meade where Bradley Manning's trial will take place, hundreds rallied to say that Obama Admin. attacks on whistle-blowers is an attack on democracy (Note: estimates of crowd size varied from 500 to over one thousand). 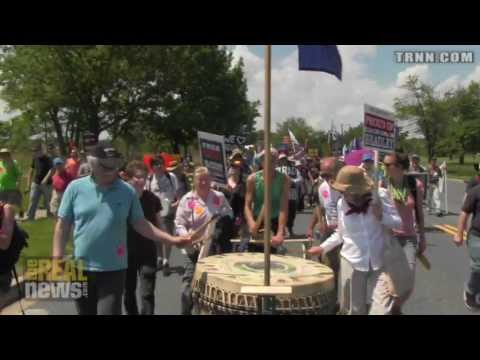 YUSUF MISDAQ, TRNN: A mass rally was held in Maryland’s Fort Meade military base on Saturday, 1 June, just days before the start of court martial proceedings against U.S. Army whistleblower Bradley Manning. Between 400 and 500 people marched, expressing solidarity and demanding justice for the incarcerated Manning, who is being court martialed in part over his decision to leak shocking footage of a deadly U.S. military air strike carried out against Iraqi civilians, including children and two Reuters cameramen.

BOB MEOLA, BRADLEY MANNING SUPPORT NETWORK: Bradley Manning’s duty was to report what he reported. That was his duty. He tried to do his duty as a soldier. Bradley Manning should never have been in Iraq to see what he saw. And that was our collective failure to not control the politicians and the war criminals. And it’s our job to see that those war criminals go to jail and take Bradley’s place.

MISDAQ: The Obama administration has clamped down heavily on whistleblowers and journalists. Twice as many people have been prosecuted under the 1917 Espionage Act than in all previous administrations combined.

ALLI MCCRACKEN, CODE PINK: I’m here as a part of the group Code Pink. We’re here to pay homage to Bradley Manning, the truthteller/whistleblower who has been in prison for the last three years for simply exposing American war crimes.

Bradley Manning is a guy who’s about the same age as me. And I think that what he did was really brave. And he essentially gave up his entire life so that the world would know about the things that the U.S. is doing and the different collaborations that the U.S. has been creating with different countries around the world, for example Yemen, to carry out really egregious policies, like drone strikes, for example.

And so I’m here with hundreds of people in solidarity with Bradley Manning to tell him that we support him and we have his back throughout his trial.

MISDAQ: Manning’s trial, which is expected to run for at least a month and possibly throughout the summer, will be accompanied by daily vigils led by the group Veterans for Peace, who will be camping right here outside Fort Meade’s front gates.

GERRY CONDON, VETERANS FOR PEACE: And many of us are veterans, members of Veterans for Peace, Iraq Veterans Against the War, Vietnam Veterans Against the War. People are really upbeat. Very strong feelings for Bradley Manning. There’s a sense of determination. We know that the government wants to keep Bradley Manning behind bars for the rest of his life. We are determined not to abandon Bradley, and we’re going to keep on fighting until he’s free, and hopefully that’ll be soon.

MISDAQ: Activist and author David Swanson believes the number of people who will recognize Manning’s patriotism and self-sacrifice in releasing this video will only increase as time goes on, a sentiment shared by many of the veterans I spoke to.

DAVID SWANSON, ACTIVIST AND AUTHOR: Manning, among other whistleblowers, has exposed it dramatically. Our voices are paid attention to to a much greater degree than we like to imagine and we tend to imagine. And it’s important to continually remind ourselves of that and to bear in mind that the government has a strong interest in pretending that it’s ignoring us. When it admits the impact we’re having, it strengthens our movement. When it pretends to be ignoring us, people get discouraged and go home. So we should remember that we are having an enormous impact, that we’ve already had an enormous impact, and that Bradley Manning’s courageous act of whistleblowing sets an example for potential whistleblowers yet to come. And so in supporting him, don’t imagine that others within the government aren’t watching and don’t want to see what support there might be for them should they choose to do likewise.

MISDAQ: For the time being, this remains very much a grassroots movement, albeit with international support. Parallel mass rallies were held at the same time in Seattle, Washington, as well as London, directly outside the U.S. embassy. Retired colonel Anne Wright, fresh from an international speaking tour, also addressed the crowd.

COL. ANNE WRIGHT (RET.), PEACE ACTIVIST: I’ve just come back from speaking in China, speaking in the Netherlands, speaking in Belgium, and speaking in Ireland. I just got back last night. And let me tell you what: with the exception of Bradley Manning, the face of America and all the countries of the world is pretty pitiful, because our faces as warmongers, our faces, killers across the world, that the bright light is in every one of those countries and virtually every country of the world there’s a Bradley Manning support group. So what we’re doing here in the United States to stand with our fellow citizen is being reflected all over the world.

Well, the “Collateral Murder” video, it’s a tragedy that U.S. military decided that they felt it was necessary to murder a man who was crawling on the ground, was no threat to anyone, who they’d already wounded–and they’d already killed other people–and then blow up a van of people–they didn’t know who it was–to include two kids in the front seat. It was murder. It was murder. And it should not have happened. And those helicopter pilots and the analysts that said, yes, go ahead and shoot them should be in jail, not Bradley Manning.

MISDAQ: Manning’s court martial will begin behind these gates on Monday, June 3. For The Real News, this is Yusuf Misdaq in Fort Meade, Maryland.

The Impeachment: Will This Be Trump’s Unraveling?