What The Changing Workplace Has to Do With Mass Shootings

Journalist Mark Ames explains how the pro-privatization and anti-labor measures of the Reagan years and beyond have bred a more hostile work environment, triggering more mass shootings in workplaces and schools

Journalist Mark Ames explains how the pro-privatization and anti-labor measures of the Reagan years and beyond have bred a more hostile work environment, triggering more mass shootings in workplaces and schools 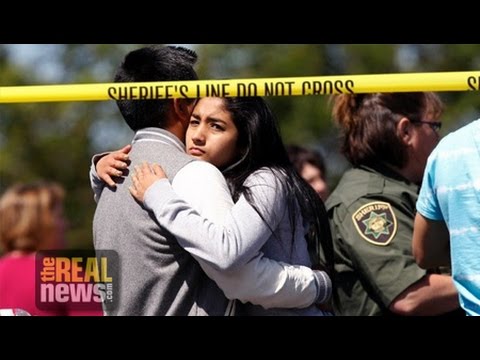 America is no stranger to mass killings. Last week at Umpqua Community College in Oregon eight students and a teacher were shot and killed. Who can forget the mass shooting at a Charleston, South Carolina black church, which killed nine members. The movie theater in Aurora, Colorado. And the tragic killing of elementary school children and teachers in Newtown, Connecticut. But how do all these mass shootings compare to the frequency of mass shootings in the rest of the world? Researchers at the University of New York in Oswego and Texas State University collected and analyzed mass shooting incidents in 11 developed countries, including the United States, from 2000-2014. Over the decade and a half studied the researchers found 23 incidents of mass shootings in the other ten countries, while in the United States over the same period there were 133.

Our guest today says social inequality and a lack of workers’ protections is part of the reason for America’s high numbers. Mark Ames is the senior editor at Pando Daily and the author of the book Going Postal: Rage, Murder, and Rebellion from Reagan’s Workplaces to Clinton’s Columbine. Thank you so much for joining us, Mark.

MARK AMES: Thanks for having me on.

DESVARIEUX: So Mark, connect the dots for us. How do we go from people coming from a harsh corporate culture and lack of worker protections to mass shootings at workplaces? There are plenty of people in America working two and sometimes three jobs. But they’re not shooting up workplaces. How can you correlate social inequality and mass shootings?

AMES: Well first of all, very few people ever kill in any situation. I remember at the start of the insurgency and during the insurgency in Iraq, one of the arguments that the administration tried to use was almost everybody in Iraq is not participating in the insurgency, therefore it’s extremely, it’s not really based on anything. It’s just a few dead-enders. So I think the fact that there are shootings, that there are people doing this and that it is something new is what is so significant.

And now, the thing that I–so I wrote this book, and one of the things that I separated out were the new kinds of mass shootings. And that is to say, mass shootings in workplaces, where colleagues come into their workplace, time after time after time. It happens all over the country since the late ’80s. And shoot up their workplace, oftentimes themselves, colleagues, usually they try to target supervisors or people who they believe ruin their lives, or whatever. And then this sort of migrated over to middle-class schools by the mid-late 1990s. And so you have to look at what changed, what happened.

Now, we’ve always had serial killers in this country. For example. We’ve had serial killers certainly throughout the 20th century. And what the FBI was able to do was create psychological profiles of serial killers. But the same FBI and Secret Service and so on, they’ve tried to do profiling for potential rage murders, that is, colleagues in the workplace who might shoot up their workplaces, or people in middle-class schools who might shoot up their schools. And they’ve never been able to come up with a profile, or the profile is so large–and the profile would include something like, has never made a threat before. You know, that’s actually in the profile list. So it’s so broad it actually doesn’t work.

So what I did in my book is I went back and I tried to profile workplaces and what changed in the workplaces that saw the rise of these massacres. Now, starting to run on here. But I want to make a distinction, though, again between those kind of killings, which are new that start in post offices and workplaces and so on, and then the kind of killings, some of the ones you mentioned, like in Oregon. That was not a student shooting up a school, writing about how he felt bullied and so on at his school. It’s the same at Sandy Hook, that was not a student at that school. That’s something different. And the same with Charleston.

DESVARIEUX: Yeah. I understand. So how has your thesis transformed since the great recession? How are you making the connection?

AMES: Well, since the great recession, as you know, inequality has actually gotten, worsened a lot under the alleged socialist Obama. It’s worsened a lot and there are a lot more shootings in schools and in workplaces. And there seem to be more shootings by sick people, as well. People looking to be famous for no particular coherent reason, or racist, or whatever.

So I would say what has changed in my thinking was initially I thought gun control or blaming it on guns seemed a little bit fatuous to me, because we’ve always had a lot of guns. There’s always been a huge gun nut culture, and there are other countries that have an enormous amount of guns, like Michael Moore talked about this in Bowling for Columbine. That Canada has close to the same number of guns that we have per capita, and they don’t have anything like the shootings we have. So I thought that’s a bit fatuous. But as I got into this more, you know, you see the reactions. I do believe that changing gun politics culture, that is, to have a culture that doesn’t always find this somehow acceptable and excuse guns, you know, that’s sort of a reflection of a larger, just crueler right-wing culture. And if you can actually politicize this more and create a politics that is both one of gun control and more social democracy and social justice, together, then you have something.

But as I wrote about after Sandy Hook, Obama at that time and the Democrats put two big things on the table. This was after his victory in 2012. One was gun control because of Sandy Hook, and the other was the beginnings of privatizing Social Security. And they were even talking about privatizing Medicare. So you have austerity plus gun control, definitely does not work and probably makes it worse.

DESVARIEUX: Okay. Let’s take your theory and look at other mass shootings that have happened in countries that have strong safety nets. For example in Norway back in 2011, a gunman, he killed 80 people, bombing a government building, going on a shooting rampage. Back in 2009 in Germany a teenage gunman opened fire in three classrooms in a local secondary school killing 15 children and teachers. So Mark, these are European countries that pay paternal leave, pay vacation. Very pro-worker policies, and they still have mass shootings. How do you reconcile that?

AMES: Yes, but they’re also extremely rare. In these European countries they’re extremely rare. And as I’ve said, there has always been, and in this country as well, the odd once in a rare while massacre in a school. There was one by a drifter in California in the ’80s at some point. There was a guy in Bath, Michigan in 1927 who actually put sticks of dynamite under a school and killed dozens of children. So you’ve always had these sort of isolated loony people.

But what you’ve had in schools, let’s say since the late ’90s with Columbine people and so on are people specifically saying that they can’t handle the culture of bullying anymore. So you know, my, the way I looked at everything by profiling schools and profiling changes in the workplace, workplaces also have become crueler and harsher. The people don’t have the same protections, the inequality is not just an inequality of wealth, although it’s obviously a huge part of it. It’s inequality of power. And people who are workers are, have far less power than they used to have.

And I should add that, you know, we’ve seen mental illnesses really skyrocket in the last 20, 30 years. And we know from studies that inequality also creates mental illnesses and exacerbates them, certainly.

DESVARIEUX: Mark, I want to push back there. Because, I mean, someone could argue, let’s go back to the early, I don’t know, 19th century. Let’s go back to the times where, in the Gilded Age. I mean, there were–work in factories was pretty harsh, too, and you didn’t have these mass shootings. So how do you respond to that?

Our culture now is vastly different from that. And what is really so different is you had certain expectations that became a kind of major premise of life in the post-war period, especially. The ’40s, ’50s, ’60s, ’70s. And then suddenly you have a very radical, revolutionary change in the political economy. You have a sudden massive concentration of wealth and power and pleasure and leisure right at the very top. And really, no outlet for it. You have sort of a mass culture saying that all this is wonderful and great. And so if you’re not participating in it, you’re alienated that much more.

And at the same time, yes. [We’ve done] politics, you do have more guns. Not just more guns in the system, but more propaganda giving people the sense that guns and violence are a kind of political response to one’s political problems. So you know, I think there are a lot of different things between then and now. And I think it’s, we could get into a separate sort of historical debate about the Gilded Age. But it was a far more violent period.

DESVARIEUX: All right. Mark Ames, joining us from Brooklyn, New York. Thank you so much for being with us.

AMES: Thanks for having me on.