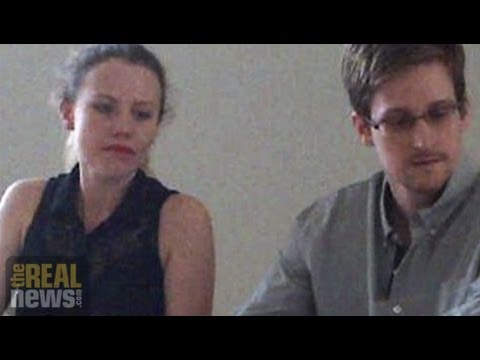 JESSICA DESVARIEUX, TRNN PRODUCER: Welcome to The Real News Network. I’m Jessica Desvarieux in Baltimore. And welcome to this edition of The Wilkerson Report.

Now joining us is Larry Wilkerson. He was the former chief of staff for U.S. Secretary of State Colin Powell, and he’s currently an adjunct professor of government at the College of William & Mary. And of course he’s a regular contributor to The Real News Network.

Thanks for joining us, Larry.

LAWRENCE WILKERSON, FMR. CHIEF OF STAFF TO COLIN POWELL: Thanks for having me on, Jessica.

DESVARIEUX: Larry, you recently wrote an op-ed called “Snowden: symptom or disease?” What’s behind that headline?

WILKERSON: I paid a lot of attention, as I’m sure you did and other Americans who are interested in these matters, to the so-called fourth estate–visual media, Fox News, MSNBC, all the usuals, and also the papers and the magazines and so forth. And, frankly, I couldn’t understand why no one’s asking the fundamental question: why so many whistleblowers? Why the Tom Drakes? Why the Edward Snowdens and others? And why the persecution, unprecedented persecution by the administration?

The answer to those questions is a huge answer. And the answer is the national security state which we’ve become and the interminable war that we wage as that state.

So Snowden is not the disease. We don’t have traitors or whistleblowers blooming all over because they are some sort of malady. The disease is war. We’ve been at war now and with no end in sight for over a dozen years, the longest in our history.

This is a symptom of the state of our country, which is a country in the arms of a media that is completely complacent, is owned indeed by the corporate-ocracy that runs this country and of a government that can’t get out of the hands of the military-industrial-intelligence-congressional–you name it; it is so comprehensive and so widespread today that one can’t even get away with calling it what Eisenhower called it in 1961. It’s a product of what we’ve become, which is a state that lives for war.

And if that’s not scary enough, if that’s not frightening enough, look at the Congress right now, supposedly a check on the executive branch’s overweening power. It is not a check at all. In fact, the Congress is paving the way right now for a couple more wars, ending up in Iran, probably going through Syria. So we have a legislative branch that is aiding and abetting the process of the executive branch becoming more and more tyrannical, more and more authoritarian. Surveillance state is just a product of that.

And if we’re looking at the judiciary branch as another constitutional check on the executive branch’s overweening power, or for that matter on the legislative branch, it simply isn’t. Whether we look at the Supreme Court and its decisions of late or we look at the FISA court as a supposedly oversight of the surveillance system, for example, it’s a joke. The FISA court is a rubber stamp. They’ve rarely ever, if ever, turned anything the government asked down. And the government asks at such a volume now and so many requests, thousands of them since 9/11, that the FISA court just–it really is a rubber stamp, so that that is an oversight of the government is sheer nonsense.

So here you’ve got the checks and balances designed by the Constitution that are supposed to offset one another when one particular part of the government becomes too powerful all in league with one another to become too powerful. And we sit back and wonder why. There isn’t any wonderment in my mind about why. And the warfare state that I just enumerated, the fact that we are a national security state whose raison d’être now is to fight wars–forever, it looks like–that just adds to the process. I mean, as Madison said, there is no more state, there’s no more state of a nation more conducive to tyranny than war. George Washington was even worried at the time about the length of the so-called Revolutionary War when it got to its sixth and seventh year, because they knew, these people who had started this effort in this country knew that war was the condition most apt to produce tyranny. It’s not any rocket science to figure that out. And here we are a dozen years or more at war, longer than any period in our history, and we’ve got all these things happening that are the trappings of war, and we sit around and ponder and wonder why. I don’t wonder why. I know exactly why.

DESVARIEUX: So, Larry, what about those people that say that the government becoming more draconian is going to equal fewer whistleblowers because people will just be afraid to come out?

One of the most ridiculous claims in the corporate media was that he’s a narcissist. My god, those people need to go get a dictionary. They’re narcissists. Edward Snowden is anything but that. In fact, I wonder every day how he could come up with the courage, muster the courage to sacrifice everything just so he could do, as he said in rather eloquent speech initially, alert the American people to what was going on. Call him a traitor, call him whatever you want to. The fact is he is a symptom of the disease, and the disease is constant war and the national security state. That is what we’ve become. That is our raison d’être in the world today, to wage war. Listen to Lindsey Graham. Listen to John McCain. Listen to anybody of any political persuasion other than the few, the few in the Congress who are objecting–and they are a few–and you hear it. You hear the words of tyranny being spoken in all three branches of government. Very frightening, and ultimately the end of this empire.

DESVARIEUX: Alright. Thank you so much for joining us, Larry.

WILKERSON: Thanks for having me, Jessica.

DESVARIEUX: And thank you for joining U.S. on The Real News Network.