US Skipping Russia Summit Demonstrates A Failure In International Relations 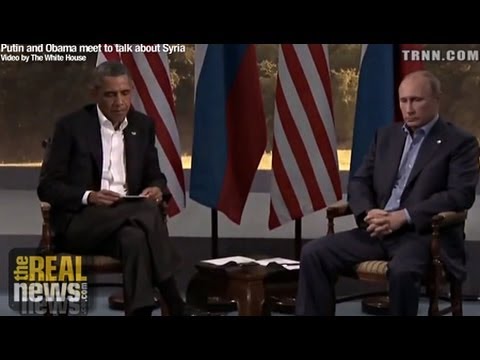 JAISAL NOOR, TRNN PRODUCER: Welcome to The Real News Network, and welcome to this latest edition of The Wilkerson Report. I’m Jaisal Noor in Baltimore.

President Obama has canceled a summit with Russian President Vladimir Putin, the immediate cause being Russia granting NSA leaker Edward Snowden temporary asylum. But the two sides will be meeting soon enough at the G20 summit next month in St. Petersburg.

BARACK OBAMA, U.S. PRESIDENT: We’re going to assess where the relationship can advance U.S. interests and increase peace and stability and prosperity around the world. Where it can, we’re going to keep on working with them.

NOOR: Here to discuss the latest in U.S.-Russia relations is Larry Wilkerson. He is the former chief of staff for U.S. Secretary of State Colin Powell, currently an adjunct professor of government at the College of William & Mary, and a regular contributor to The Real News Network.

Thank you so much for joining us, Larry.

LAWRENCE WILKERSON, FMR. CHIEF OF STAFF TO COLIN POWELL: Thanks for having me. And I hope your fundraising is going well.

NOOR: It is. We actually just met our goal. And thanks for asking.

So, Larry, what do you think accounts for these rising tensions between the U.S. and Russia?

WILKERSON: [snip] I think one of the dominant factors right now, though, is Putin in politics, and to a certain extent Obama in politics. On the Russian side, you’ve got President Putin, whose poll ratings, as I checked them yesterday, were still in the 60s, making those poll ratings that high principally by poking his fingers in Washington’s eyes. Nationalism is on the rise in Russia. It’s the force that keeps Putin in power. And anything he can do to beard the lion, so to speak, Washington, is a plus for him. So that’s his politics.

On the other side of the ocean, in Washington, Obama’s got the left wing of his party up in arms over LBGT procedures in and policies in Moscow and Russia at large, treatment of gays and lesbians and so forth, and also the sort of picture-book child now we have with Alexei Navalny and his running for the mayorship of Moscow, and his challenge to the Putin hierarchy, if you will, even now accused of foreign fundraising, a standard Putin technique straight from his days in the KGB.

That said, the more substantive issues, like North Korea, Iran, Afghanistan, arms control, what’s happening in Syria, which pits Russia and the United States to a certain extent [snip] these are serious issues. And so not talking about them and not meeting to talk about them is a problem. I’ll hasten to add, though, that I don’t think talking about these problems at the top level, the so-called summit level, is really the end-all and be-all that it’s touted to be.

NOOR: So, Larry, I want to ask you more about how Syria fits into this picture. We know that Russia has maintained close ties with Syrian President Bashar al-Assad throughout the conflict. The U.S. has been funding the opposition. Is Syria essentially turning into another battleground for Cold War politics to play out?

WILKERSON: I wouldn’t call it Cold War politics. I’d call it realpolitik, the politics of today. Yes, Syria is a battleground if we’re to believe the reports. We have Israel striking Russian arms shipments in port. We have Israel doing other things in Syria, I’m sure, clandestinely and otherwise. We have Russia trying to keep Assad in power, along with Iran. And we have the United States having said that Assad staying in power is not tenable, and yet it looks like Assad is staying in power quite well, thank you. So this is a battleground where you can see Turkey, you can see China, you can see Russia, you can see the United States, Iran, a whole host of regional and even global characters. So this is a very dangerous situation in Syria.

NOOR: Talk about the role of trade in this ongoing power struggle, especially in light of the Obama administration’s Asia pivot.

What have we done in the pivot, really? We haven’t done anything to beef up assets in the Pacific theater. If anything, those assets are probably slightly less than they were several years ago. What we’ve done is said that we’re going to do things differently in the Pacific and we’re going to focus on the Pacific rather than Western Asia, rather the Middle East. Whether that actually comes about or not is anybody’s guess.

But you can see things developing, like the U.S.’s alliance, especially Maritime alliance with India, like the U.S. opening to Burma, recent opening to Burma. These are all things seen as Beijing as instrumentalities of the American hedging strategy. That is to say, if China turns out to be a typical great power and wants to fight everybody, then we’re lining up our people to make sure we win that fight.

It’s a strange situation in the world right now. That’s the only way I can describe it, because you’ve got things like Syria, things like Iraq falling apart even as I speak, things like Afghanistan that are anything but a success and will turn right back into a mess again, turmoil all across the so-called Arab Spring countries. Egypt seems to be falling apart right now. And then you’ve got the great powers [incompr.] around with each other in everything from commerce to arms control, G8, G20, and so forth, a lot of that just happening on the surface of the real events that are happening in the world.

We have some massive power shifts that are going on. And one of those shifts is taking place in light of the demise of and, really, the relinquishing of a lot of power by the United States and the resumption of or assumption of that power, however incohately, by lots of different people in the world, China, of course, most prominently, but the BRIC nations too. And this is commercial power, economic power, financial power, as well as what we call hard power. It’s going to be an interesting time to live in.

NOOR: Finally, the G20 Summit happens early next month. What effect will the rise in tensions have on this summit and its potential outcomes?

WILKERSON: I don’t think very much. I think we’ll probably see Obama and Putin in some kind of private bilateral meeting, perhaps, at the G20 in St. Petersburg. I think it’s 5 and 6 September. Or perhaps not.

The G20 has become, as the G8 has become, sort of an ineffectual organization. They meet, they talk, they say they’re going to do this, they say they’re going to do that, they put development, sustainability, and so forth on the agenda, they put all kinds of global challenges on the agenda that clearly are serious challenges, and then they don’t do anything about them. So I’m not sure these summits are anything to be watched with great relish anymore in terms of expecting great results. They just don’t seem to produce much.

Now, better to jaw-jaw than to war-war, as Churchill said. So I’m not saying they shouldn’t go on. I’m just saying that we probably need to find some other mechanisms. Principally they’re going to be bilateral mechanisms, probably, to get some of these challenges met, because we’ve got some serious challenges, everything from water depletion to Arctic ice melt, to acidification of the oceans, to disappearing fish stocks, all these things that are going to affect all of us and going to affect us sooner rather than later.

NOOR: Larry Wilkerson, thank you so much for joining us.