Military Court Finds Manning Not Guilty of “Aiding the Enemy”

Larry Wilkerson: Military culture dissuades whistleblowing, verdict is a symptom of the disease of endless war

Larry Wilkerson: Military culture dissuades whistleblowing, verdict is a symptom of the disease of endless war 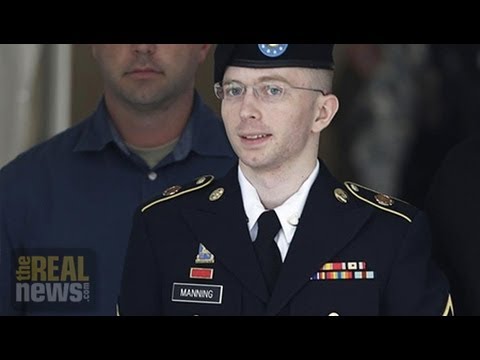 The verdict is in for Army Private Bradley Manning. Today a judge found Manning to be not guilty of aiding the enemy, but guilty on five counts of espionage and five counts of theft. Manning, as we all know, was an intelligence analyst who leaked 700,000 documents to WikiLeaks in 2008. He could have faced life in prison or death if he was convicted of aiding the enemy.

Now joining us to unpack all of this is Larry Wilkerson. Larry was the former chief of staff for U.S. Secretary of State Colin Powell. He’s currently an adjunct professor of government at the College of William and Mary, and he’s a regular contributor to The Real News.

Thanks for joining us, Larry.

So we have here Manning is not guilty of aiding the enemy, but we have five counts of espionage and five counts of theft, some people saying that this could even add up to a life sentence. So do you think justice was served here today?

DESVARIEUX: Okay. What was so significant about this not-guilty verdict when it comes to aiding the enemy? Can you explain that for our viewers?

WILKERSON: I think if you look at it from a strictly legal point of view and [incompr.] here–I’m not a lawyer, of course–you are looking at the possibility of–I guess it’s still applicable–being hung by the neck until dead at Fort Leavenworth, Kansas, if you are found guilty of the more heinous charge, that is, aiding the enemy. I don’t think the Army, the military would have done that, but I do think they would have in some cases gleefully administered a life sentence, maybe even a life sentence without parole, and maybe even a portion of which at hard labor, which is really hard labor, breaking rocks or whatever at Fort Leavenworth.

So in that sense what seemed to be a very strange decision on behalf of the legal team, and Bradley Manning, I assume, himself, too, to sit before only a judge rather than a jury of your peers makes some sense, because I think they were thinking that they would [incompr.] get a purely legal opinion from a judge based on all the factors of the case than they would from people who might be governed somewhat by their emotions in terms of a jury of his peers. So in that sense they did avoid the more draconian sentence.

But as you pointed out, if sentencing occurs in accordance with the maximum jail time for each of these five on the one hand and five on the other hand, ten total counts, it could amount to a life sentence.

DESVARIEUX: Okay. And also, with this not-guilty charge of aiding the enemy, it seems like a victory for whistleblowers everywhere. We know we have Edward Snowden’s case. He hasn’t been charged of anything formally, but we do know that this could certainly serve as a precedent. But with Manning’s case, considering he was in the military, let’s just talk about whistleblowing in the military for a moment. You mentioned you are a colonel. You served in the military for 30-plus years. Larry, can you just explain for our viewers what is the actual procedure once you are in the military to blow the whistle?

WILKERSON: The military’s a very different institution from most walks of life, even in America. The military has a system that’s very regimented and very oriented towards good order and discipline, as you might imagine, particularly in combat, where it’s a necessity. So you have different avenues of official complaint. You have inspectors general, you have your chain of command, both informal and formal, and you have everything from chaplains on the one hand to mental health authorities who can help you on the other hand. So you’re supposed to go through these official or semi-unofficial channels before you ever speak out about anything.

So it’s difficult to even think of whistleblowing in the military. It’s more speaking out about the malfeasance or even the corruption or what you think is the wrongness of a particular order or directive or regulation or whatever within the chain of command or outside the chain of command. I don’t think, frankly, in 31 years I ever heard the term inside the military whistleblowing. It’s just not looked at with that kind of connotation. It’s looked at more with a sort of that guy’s a radical, he’s speaking outside the chain of command, or that woman is wrong because she’s not gone through official channels, and so forth. It’s a different environment entirely than the civil environment.

DESVARIEUX: Okay. And now that Manning has been convicted, what is the procedure in a military court for appeals?

WILKERSON: This could go on for years. It could conceivably go on for a decade. The first thing that has to happen is it goes–Judge Lind, Denise Lind’s verdict and sentence goes to the convening authority, in this case the commander of the Military District of Washington, as I understand it. And he can amend, he can dismiss entirely, or he can confirm her findings. I would suspect there’ll probably be a confirmation of her findings just to prohibit any brouhaha that might develop around that particular occurrence.

But then it can go to the Army Court of Appeals. It can go outside to the civilian court of appeals. It can go above the Army Court of Appeals to the Court of Appeals for the Armed Forces. And then, of course, ultimately, should they want to and should the Supreme Court decide to accept it, it can go to the Supreme Court. So as we all know about America’s legal system, it can be a long time in the appellate process. So I wouldn’t see–if Bradley Manning is willing and if his lawyers are game, I wouldn’t see this being decided anytime soon.

DESVARIEUX: Okay. Well, thanks so much for joining us, Larry.

WILKERSON: Let me just say one other thing, Jessica.

WILKERSON: This is a case that is symptomatic of a disease in this country right now. And the disease is constant war. Bradley Manning, Edward Snowden, Tom Drake at the NSA, for example, these people are not a problem that America needs to deal with. They are symptoms of the disease that America needs to deal with. And that disease is a constant state of war.

We’ve been at war now longer than any time in our history, and we’re manifesting all the things that, for example, our founders told us would be manifested in an interminable state of war. We’re doing things to our people we shouldn’t be doing, like this massive surveillance program. We’re using drones in an indiscriminate way around the world. We’re building up the military-industrial-congressional complex to the point where it is actually competing with the corporatocracy that’s running this country, with the plutocracy that leads this country. We’re doing all sorts of things that are tyrannical, all sorts of things that are very dangerous for this country.

DESVARIEUX: Okay. Well thanks again for joining us, Larry.

WILKERSON: Thanks for having me, Jessica.